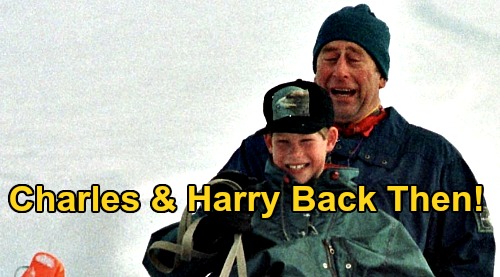 British royals news reveals that Prince Charles’ plans for the future drastically changed when Prince Harry and Meghan Markle decided to leave the fold. As royal watchers know, Prince Harry and Meghan stepped back from their roles as senior royals this past spring, and they hightailed it out of England to North America in the infamous Megxit. The couple is currently living in Tyler Perry’s mansion in the Los Angeles area along with their one-year-old son Archie Harrison.

Well, as you can imagine, Prince Charles is surely looking ahead to the time when he will be king. And now a royal author is saying that had Prince Harry and Meghan Markle stayed, Prince Charles was planning to increase their importance in the royal family.

The author, Nigel Cawthorne, recently published “Prince Andrew, Epstein, & The Palace,” and he claims that Prince Charles will want a slimmed-down version of the monarchy.

According to Cawthorne, Prince Charles was happy with the marriage of Harry and Meghan, and he saw that the marriage made Harry very happy, and that “it created at the same time a new story for the monarchy” that resonated around the world.

Of course, with a slimming down of the monarchy would come increased importance for those in Prince Charles’ inner circle, and it means that Harry and Meghan would have become even more key figures.

“He [Prince Charles] was delighted with Meghan and, undoubtedly, would have continued to draw the Sussexes in more and more and would have tried to expand their role in the Firm as much as could be expected,” Cawthorne has said.

But when Prince Harry and Meghan Markle decided to give up their royal life and their titles, this certainly has modified Prince Charles’ plan for the future of the monarchy.

However, Cawthorne thinks that Prince Charles as the future king will simply roll with the punches, and while Harry and Meghan are popular, “so are other members of the royal family and the monarchy is not just about popularity.”

We should note that Prince William and Kate Middleton have been enjoying considerable good press in recent weeks as they’ve emerged from lockdown and have drawn attention to frontline workers and to the plight of small businesses during the lockdown.

One wonders whether Prince Harry and Meghan Markle will ever reflect on what they stepped away from once Prince Charles ultimately becomes king and the monarchy under him takes shape.

Assuming that Harry and Meghan stay in Los Angeles, they’ll have a very different life by then, but plenty of royal watchers will be wondering how they’d have fit into that scenario. Be sure to check back here at CDL for more British royals updates and news.