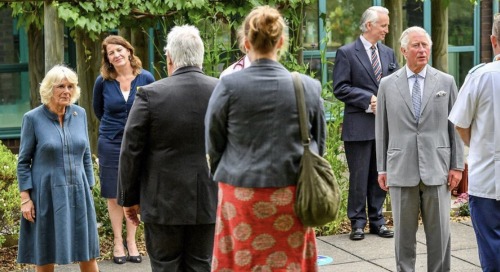 Prince Charles made a big revelation recently as he visited with medical staff and frontline workers at Gloucestershire Royal Hospital. Prince Charles and Camilla Parker-Bowles made their first public appearance since the lockdown at the hospital on Tuesday, June 16, where they chatted with hospital personnel while maintaining social distancing protocols.

As you might be aware, Prince Charles tested positive for COVID-19 back in March. Charles was the first member of the British royal family to get the virus, and he quickly went into isolation and fortunately recovered fairly quickly.

What wasn’t known until his visit yesterday with hospital staff was how the virus had manifested in Prince Charles. During Prince Charles and Camilla Parker-Bowles’ visit, Charles revealed to one gentleman on staff some details about what he had experienced when he had the virus.

The gentleman, Jeff Mills, who is a healthcare assistant from Cheltenham General Hospital, said that Prince Charles spoke about his personal experience with the virus. “He also spoke about his loss of smell and taste, and sort of still felt he’s still got it now,” Mills said.

Of course, the temporary loss of taste and smell are two symptoms that people who have the virus report. In fact, many people have been on the lookout for those very symptoms as early indicators of the virus. Other symptoms include a persistent cough and a fever.

Shortly after Prince Charles contracted the virus, Prince William revealed in an interview with the BBC that he was concerned about his father when he first heard the news.

This is of course totally understandable, given that Prince Charles is in a high-risk group given his age of 71. “He fits the profile of somebody – at the age he’s at – which is fairly risky, and so I was a little bit worried,” Prince William said.

Prince William made his first in-person visit on Tuesday, June 16, as well, as he visited the King’s Lynn Ambulance Station to talk with frontline responders and thank them for their service through this difficult time.

It’s good to see members of the royal family getting back to public appearances – it’s definitely progress! Be sure to check back here at CDL for more British royals news and updates.