Prince Charles Worried About Meghan Markle – Too Strong To Co-Exist With Queen Elizabeth? 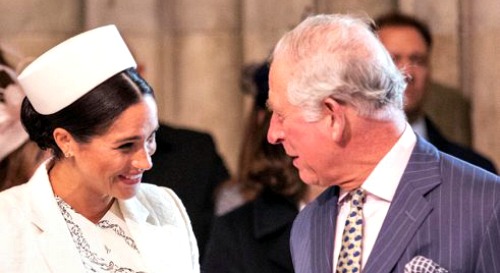 Nigel Cawthorne, who wrote “Prince Andrew, Epstein, and the Palace,” claims that Prince Charles was worried because there’s “only room for one Queen.” Charles apparently noticed that Meghan Markle was a very headstrong woman, and he wondered how that would go over with Queen Elizabeth.

In addition, Prince Charles was noticing that Prince Harry and Meghan Markle’s popularity was soaring, while he wanted to keep the monarchy “small in size” – something that wasn’t going to be particularly easy to do given how much press Harry and Meghan were getting.

Of course, none of this is to say that Prince Charles was put off by Meghan’s strong personality. Cawthorne told Fabulous that he thinks that Prince Charles “likes strong women, but in The Firm there is room for one Queen.” It has been said that Charles and Meghan Markle became close after he walked her down the aisle at her wedding to Prince Harry.

In fact, a palace insider has said that Prince Charles admires Meghan for “her strength and the backbone she gives Harry, who needs a tungsten-type figure in his life as he can be a bit of a softy.” Prince Charles even nicknamed Meghan “Tungsten,” which is a term of affection.

And for all we know, the Queen welcomed Meghan precisely because she was a strong woman. Certainly, two strong women can get along in a family – even in the Royal family!

Of course, Meghan and Harry subsequently stepped back from their roles as senior members of the royal family, but it doesn’t seem that Meghan’s or the Queen’s status as strong women were to blame for that.

As for Prince Charles’ other concern – that the monarchy should stay small in size – it seems that this worked out after all, since Price Harry and Meghan Markle are now literally across the world and living lives of their own. Be sure to check back here at CDL for more British royals news and updates.