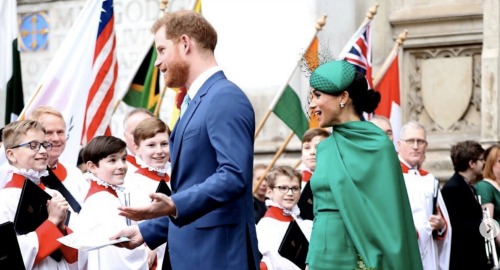 In fact, Harry and Meghan recently sent a letter to one charitable organization called StreetGames, which has been delivering meals to young people in need across London during the coronavirus pandemic. The meals that are being distributed are coming from the Hubb Community Kitchen, which is another charitable endeavor that Prince Harry and Meghan Markle have supported.

StreetGames is a national sports charity that helps young people in the UK’s most disadvantaged areas. The organization does great work, and it recently shared Harry and Meghan’s letter with the world on Twitter, along with the following caption: “Absolutely delighted to have the support of Harry and Meghan – thanks so much for continuing to reach out to brilliant community organizations like the @smpbrixton, Hubb Community Kitchen, and North Paddington Youth Club as they help families struggling during #Covid19.”

Prince Harry and Meghan Markle wrote in their letter that they were touched to witness the great things that StreetGames was doing from afar, and they stated that “the compassion and leadership of young people across the StreetGames network is vital” and inspires others to do better.

Before they stepped back as senior members of the royal family, Meghan Markle visited the Hubb Community Kitchen on many occasions. In fact, Meghan even wrote the foreword to the Hubb Community Kitchen cookbook back in 2018. The kitchen was launched by some survivors of the Grenfell Tower fire so that other survivors could cook food for their families.

Meghan recently honored the Hubb Community Kitchen’s founders and volunteers with an audio message last week, on the third anniversary of the fire. Meghan seems determined to maintain her personal touch with the charities she championed in the UK while working there as part of the royal family.

It’s great to see Prince Harry and Meghan Markle continuing their relationship with the charities that they worked so earnestly with back in the UK. Harry and Meghan’s new charitable foundation – Archewell – will be up and running most likely in 2021, furthering their charitable works. Be sure to check back here at CDL for more British royals news and updates.