Prince Harry & Meghan Markle Struggle To Find Their Footing – How Successful Will They Be In Los Angeles? 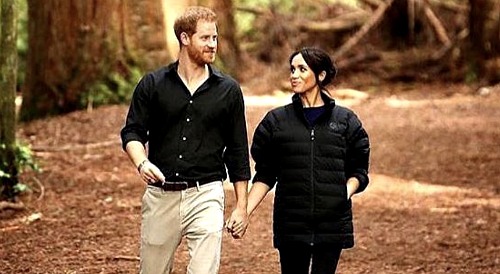 British royals news reveals that Prince Harry and Meghan Markle may be feeling rather impatient right about now. As royal watchers know, Harry and Meghan first moved to Canada when they left the UK, but they subsequently settled in Los Angeles and have been staying at a mansion owned by Tyler Perry in the Hollywood Hills.

Current reports are that Harry and Meghan are searching for a permanent residence in Los Angeles, so it seems that they really want to make a go of it in the city of angels. The first step was to be their new charity called the Archewell Foundation, but their plans for the foundation have been on hold since the coronavirus lockdown occurred.

It also seems that Prince Harry and Meghan Markle intended to embark on a public speaking tour, as they spoke earlier this year at a JP Morgan event. Of course, the public speaking circuit can be quite lucrative, but since public speaking opportunities are not available now (and not for the foreseeable future) due to the lockdown, those plans are on hold as well.

In fact, a Daily Mirror royal editor has said that “All their plans are simply up in the air at the moment. They had huge plans once they settled in Los Angeles…to set up their own foundation and now obviously those plans are in tatters.”

The editor also said that it remains to be seen how successful Prince Harry and Meghan Markle will be. The couple has moved to a very different world than Prince Harry is used to, and while Meghan might fit in readily and conceivably get work and activities to keep her working and busy, it could be a very different story with Harry.

Right now, it’s unclear when things will get back to normal in the world, and especially in Los Angeles, where the rise in COVID-19 cases is being closely watched. Prince Harry and Meghan Markle could be looking many months into the future to get their new careers and personas off the ground.

The whole situation is bound to be frustrating, as Harry and Megan struggle to find their footing in their new city. And when things do get back to normal (or to a new normal), will they find the success that they desire in Los Angeles? Time will tell. Stick with us for all your British royals updates and news – here at CDL, we’ve got you covered!