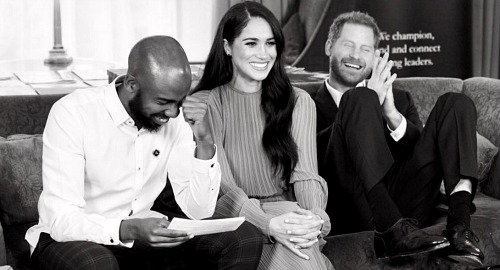 Prince Harry and Meghan Markle have taken another big step toward their final separation from the royal family. As royal watchers know, Harry and Meghan stepped back as senior members of the royal family this past spring, and they subsequently moved to North America, first to Canada and then to Los Angeles. Harry, Meghan, and one-year-old Archie are currently living in Tyler Perry’s mansion in LA.

Well, it seems that Prince Harry and Meghan Markle are slowly but surely taking steps toward becoming completely independent, which of course is their stated goal. Harry and Meghan want to be financially independent and to live their own lives, outside of the watchful eye of the royal family.

This past week, Prince Harry’s global initiative Travalyst removed the “His Royal Highness” title from its website’s blurb about Harry as its founder. The blurb now simply refers to Harry as the Duke of Sussex rather than HRH the Duke of Sussex.

This was wholly expected, given that as part of Harry and Meghan’s step-down, they were told by Queen Elizabeth that they were no longer to use their HRH titles.

Shortly after Prince Harry and Meghan Markle stepped down from their royal roles in March of this year, they announced a new nonprofit organization that they hoped to get going in 2020 – the Archewell Foundation.

Unfortunately, the coronavirus pandemic has thrown a wrench into that plan, and Harry and Meghan have put Archewell on hold until 2021.

However, Harry and Meghan have very recently taken steps to dissolve their Sussex Royal charitable foundation, which is progress. As part of their separation from the royal family, Harry and Meghan are precluded from using the Sussex Royal branding, which is why the couple is no longer active on their old Instagram account, which was @SussexRoyal. It was only a matter of time before they needed to close the Sussex Royal charitable foundation as well.

All of these steps are important in getting to where Prince Harry and Meghan Markle want to be, but they have a long way to go before re-establishing their presence. Harry and Meghan are currently not on social media, but we suspect that this move could come soon, perhaps under the Archewell name.

At any rate, Harry and Meghan are slowly becoming more independent and claiming the life that they want. And once some of these necessary “separation” steps are done and the coronavirus situation settles down, we should see Harry and Meghan start to embrace who they are outside of the royal family. Be sure to keep CDL at the ready so you don’t miss any of our British royals news and updates.