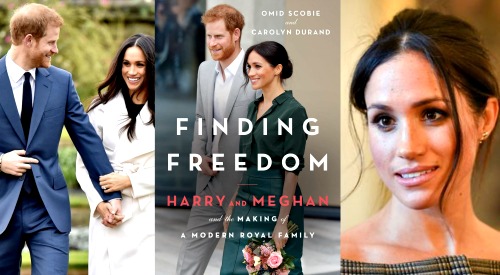 The new tell-all “unofficial” biography of Prince Harry and Meghan Markle that’s due out in a few days will probably have some big repercussions. The book is called “Finding Freedom” and it will lay out what happened with “Megxit” and all the underlying drama behind Harry and Meghan’s exit from the royal family.

It’s been widely speculated that Prince Harry and Meghan Markle may have unofficially contributed to “Finding Freedom,” although authors Omid Scobie and Carolyn Durand have said that the couple were not at all involved in the book.

Rather, Scobie and Durand said that they relied on sources close to the couple and insiders. Still, there are many who think that Harry and Meghan gave their blessing on the book.

The book, parts of which have been serialized by various outlets in advance, makes some startling claims about tension between the royal family and Harry and Meghan. For example, it claims that Prince Harry was upset by Prince William’s “snobbish” advice that he not rush things with Meghan.

Further, the book says that Meghan was deeply disappointed that Kate Middleton didn’t reach out to her in the early days of Meghan and Harry’s relationship.

The book also claims that the relationship between Harry, Meghan, William, and Kate was extremely strained, and that Meghan and Harry believed that other royal households were leaking things about them to the press.

Of course, there will be much more to the book, but various early readers have noted that what they’ve seen perhaps doesn’t paint Prince Harry and Meghan Markle in a very positive light.

Rather, the book seems to be a litany of complaints by Harry and Meghan about their royal life and about how they were supposedly mistreated and victimized by the royal family.

Well, that “take” on Meghan and Harry’s story might not sit well with the public, at least according to one royal watcher and author, Nigel Cawthorne.

Cawthorne, who authored his own book about Prince Andrew not so long ago, thinks that “Finding Freedom” is “bound to be more damaging in the UK to the Sussexes rather than the Royal Family.”

However, Cawthorne did opine that the book might have a more positive effect on Prince Harry and Meghan Markle’s status as “A-Listers” in the US. Of course, in the US, for Harry to burn bridges with his family is not really a big deal.

But in Harry’s home country, there could be lasting repercussions, especially if Harry ever decides that he wants to return to the UK and resume royal life someday.

One thing’s for sure – if the book is perceived by the public as being nothing more than a collection of petty complaints from a couple who is already perceived to be quite privileged, then there’s a very good chance that Prince Harry and Meghan Markle could be far more damaged by it than the royal family will be.

Keep reading CDL so you don’t miss any of the latest British royals news or updates.