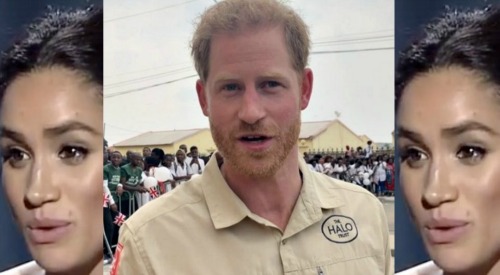 Prince Harry may have been anxious to leave the royal family long before Meghan Markle arrived on the scene. The exit of Harry and Meghan is commonly referred to as “Megxit,” indicating the general belief that Meghan was the driving force behind Harry’s decision to step back as a senior royal and leave for North America.

As you might know, Harry and Meghan stepped away from the royal family this spring and they are currently living in Los Angeles along with their one-year-old son Archie Harrison.

Well, in the upcoming bombshell book “Finding Freedom,” it seems that authors Omid Scobie and Carolyn Durand describe exactly what led to Prince Harry and Meghan Markle’s departure from the royal family, as told by “numerous palace insiders” and the authors’ years of experience in watching the royal family – and in particular, Prince Harry – over the years.

ET Online is reporting that royal expert Katie Nicholl, who has read excerpts of “Finding Freedom,” says that Harry was unhappy in the royal family for a long time, and that Meghan ultimately encouraged him to break away from the family.

Nicholl reported that one of the themes in the book is that “Harry felt very much like a spare wheel” with Prince William and Kate Middleton.

It seems that Prince Harry didn’t enjoy being seen as part of a “trio” with Prince William and Kate Middleton, even though Nicholl said that William and Kate “went out of their way to make sure Harry felt like a part of this team, this trio.”

Nicholl said that she thought that Meghan was the “catalyst” in giving Harry the confidence to break free from that “trio dynamic” that he didn’t want.

Further, after reading excerpts from “Finding Freedom,” Nicholl said that she thinks that Prince Harry was “very much a driving force” in his and Meghan’s move to Los Angeles. “Harry is a pretty opinionated and strong-willed man,” Nicholl said, “And I’ve been told by several very well-placed sources that it wasn’t just Meghan dragging Harry.”

So, it seems that Meghan might have given Harry a new confidence, but that Harry had wanted out of the royal family for quite some time. And this might explain the ongoing rift that reportedly developed between Prince Harry and Prince William, that could have been made far worse when Meghan arrived and was the catalyst for Harry finally leaving the fold.

It is easy to see how it might be tempting for William to blame Meghan for Harry’s ultimate decision to leave.

At any rate, it seems that Prince Harry’s feelings about the royal family – and specifically as they relate to him leaving – are deeply rooted and strongly held. Be sure to check back here at CDL for more British royals news and updates – we’ve got you covered!