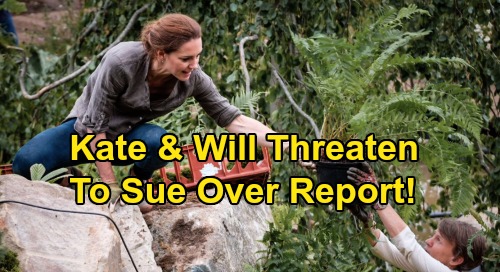 British royals news reveals that Prince William and Kate Middleton have taken a big step against a magazine called Tatler, and they’re reportedly livid over the contents of an article featured in an edition of the magazine titled: “Catherine the Great.” Prince William and Kate Middleton are so enraged that they have threatened legal action against the magazine, and they’ve put out a scathing statement about the article’s “inaccuracies” and “false representations.”

The article, which was written by Anna Pasternak, makes several claims that have Prince William, and particularly Kate Middleton, very upset. The author claims, for example, that Kate had become “perilously thin, just like Princess Diana,” and that Kate is furious over her larger workload now that Prince Harry and Meghan Markle have stepped back from their royal duties. The article claims that Kate feels “exhausted and trapped.”

In addition, the article says that William and Kate “really wanted to be hands-on parents and the Sussexes have effectively thrown their three children under a bus.” The article also makes claims about the Middleton family, including that Prince William is obsessed with Carole Middleton, and that “she’s the mummy he always wanted.”

Well, it wasn’t long until lawyers for Prince William and Kate Middleton got enraged and sent threatening legal letters to Tatler demanding that the digital version of the story be removed from the internet altogether.

A Royal Source has called the claims about Kate’s family and the couple’s children to be an “extremely cruel add wounding barb – it’s sexist and woman-shaming at its very worst.”

And the Palace said in its statement about the article that, “This story contains a swathe of inaccuracies and false misrepresentations which were not put to Kensington Palace prior to publication.”

To its credit, though, Tatler doesn’t seem to be too scared about Prince William and Kate Middleton’s tough talk and legal threats. Tatler released a statement of its own, saying, “Tatler’s Editor-in-Chief Richard Dennen stands behind the reporting of Anna Pasternak and her sources.”

The statement continued: “Kensington Palace knew we were running the ‘Catherine the Great’ cover months ago and we asked them to work together on it. The fact that they are denying they ever knew is categorically false.”

At any rate, this very public feud between the Cambridges and Tatler seems to only be shining a spotlight on the claims made in the article, It doesn’t seem that Tatler is going to back down anytime soon, nor does it seem that Prince William and Kate Middleton can do anything more about the issue at this point.

Of course, the palace surely feels that it needs to take issue with what it doesn’t see – or doesn’t want to see – as being true. But might the Palace’s protests just call more attention to all these claims about Prince William and Kate Middleton? Be sure to check back here at CDL for more British royals news and updates.