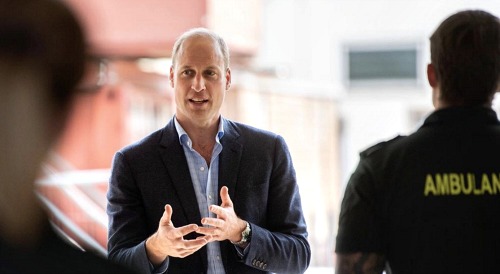 Prince William made his first pubic visit since the coronavirus lockdown, and he took the opportunity to pay tribute to some of the folks who have been on the frontline helping others amidst the crisis. Prior to now, William and Kate Middleton had been carrying out their royal duties via video calls.

Prince William visited with the emergency medical technicians at the Kings Lynn Ambulance Station at the Queen Elizabeth Hospital in Norfolk. William was apparently quite jovial during the visit, saying that he was concerned “about the waistline of the country” because of all the sweets that have been consumed during the lockdown. William even said that he had been busy baking during quarantine.

Prince William and Kate Middleton and their three children have been in lockdown in their home, Anmer Hall in Norfolk, since the UK started restricting travel. Prince William’s final public appearance before the lockdown was in Croydon back in March, when he and Kate made a secret visit to an ambulance service control room.

Staff at the Kings Lynn Station reportedly spoke with Prince William about how they had been performing their work with various precautionary measures in place, as well as the support they have had from the public. William made sure during the visit that the workers were taking care of themselves and that they were keeping an eye on their mental health.

“Heed that warning, I know where you all are,” William said to the workers. “Remember your mental health. Have that little version of me in your head.” William also joked with the workers that he was looking forward to getting the government mandate that they all need to go support their local pubs.

Prince William’s visit to the station was announced on the @KensingtonRoyal Instagram feed along with the following message: “Thank you to the staff of Kings Lynn Ambulance, Queen Elizabeth Hospital for welcoming The Duke of Cambridge to their ambulance station, and sharing so candidly their experiences over recent months in responding to the COVID-19 outbreak.”

Followers of @KensingtonRoyal had plenty of positive things to say about Prince William’s visit. One person commented: “It’s great to see Prince William back out there supporting those on the frontline!” And someone else said: “I really appreciate all the work all of these people do and the work on mental health, it is so important.”

Hopefully, we’ll see more in-person appearances by Prince William and Kate Middleton soon, and it seems significant that William chose to make his first post-quarantine appearance to front line workers. Stick with CDL, and we’ll be sure to provide all your updates on the royal family.

Thank you to the staff of Kings Lynn Ambulance, Queen Elizabeth Hospital for welcoming The Duke of Cambridge to their ambulance station, and sharing so candidly their experiences over recent months in responding to the COVID-19 outbreak. The Duke heard from the crew about their impact on mental health and wellbeing, the support they have received from members of the public and local businesses, as well as help from volunteering networks. The England Ambulance Service Trust (@EastEnglandAmb) provides round-the-clock accident and emergency services to 6.2 million people living in the East of England, operating over 130 sites and working closely with other blue lights partners to ensure that every patient receives the best possible care. In April this year, The Duke and Duchess of Cambridge supported the launch of @ourfrontlineuk, an initiative that was created to provide round-the-clock mental health and bereavement support to frontline staff and key workers.