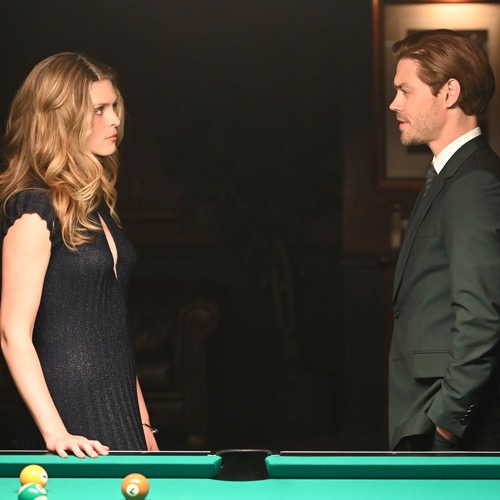 Tonight on FOX their new crime franchise Prodigal Son airs with an all-new Monday, March 23, 2020, episode and we have your Prodigal Son recap below.  On tonight’s Prodigal Son season 1 episode 17 called, “Stranger Beside You,” as per the FOX synopsis, “The NYPD dives into a case surrounding a famous mommy blogger, whose husband was mysteriously stabbed just days after their baby was born.

Meanwhile, Bright finds his way back to Eve, but can’t shake his paranoia that there’s more to her than meets the eye. To help ease his nerves, Ainsley helps him do some investigating and uncovers a secret she has been keeping.”

Malcolm wakes from a nightmare. Eve is there working on her computer. She has been shackling him to his bed for 2 weeks so he won’s sleepwalk and do crazy things.

Malcolm meets with his sister. He thinks Eve is hiding something. He wonders why she has a locked briefcase. And why would she come back after he tried to kill her? Ainsley tells him to relax, not everyone is a serial killer. She tells him to look into her.

Called to a murder scene, Malcolm meets the team. A rich male, named Ezra, in textiles has been killed. He died in the middle of a party in celebration for his newborn daughter. Malcolm scopes the place out and believes the killer has anger issues. He stabbed the male with a broken champagne bottle in the carotid artery. The bottle is still implanted in the vic’s neck with the cork intact. They speak to the wife who found him. Malcolm’s dad calls. He asks what he has been up to. They had an agreement for visits. Suddenly, the cork gives way, rocketing through the room. Edrisa jumps on Malcolm to save him.

Malcolm asks Dani if she can add Eve to her background checks she is doing on her partygoers for their new case. She tells him no. Meanwhile, Malcolm and Gil head to talk to several mothers who know Ezra and his wife.

Ainsley visits her mother who is with Eve. They are searching for the girl in the box. Ainsley shares with Eve that she may have looked her up. This spooks Eve and angers her mom. Eve leaves.

Malcolm and Gil talk. Malcolm wonders if Ezra and his wife were projecting a fake, happy life. Dani shares that the couple’s nanny, Christine, they mentioned does not exist in any data bank. Malcolm and Dani head to see the mother. It’s late, she is awake and has an injury that looks fresh on her arm. She downplays it. They ask if her husband may have been having an affair with Christine. She says no way. Just then they. Hear walking upstairs. On the baby monitor, they see Christine. She may have slipped in a window and it looks like she is trying to steal the baby. They rush upstairs but she is gone. The baby is still there.

The team tracks down Christine‘s husband. They video chat with him and he shares that Christina’s been missing for the last year and he’s been looking for her. She’s a nice person but has had a few run-ins with the law and he doesn’t know why she ran away because that all seemed to behind her.

Malcolm goes to visit his dad. He shares some with that he might be having trouble in paradise with his girlfriend. Malcolm asks his dad how he became such a great liar. His dad gives him a speech about lying and love and being open to the possibility that the person you love is hiding things from you or just doesn’t want you to know about them. Malcolm tells him that they are not having a moment. They start to talk about Malcolm‘s case and his dad gives him a few good ideas. Why would the mother be in Monaco sailing pregnant? Maybe she’s not the mother at all and was never pregnant. He sends the team to track down the mother who they find on a walk outside late at night. They don’t tell her they’re following her, watching her from a distance as she walks her baby in the carriage onto a branch. She takes the baby swaddled out of the stroller and throws the baby into the river. They come running. They realize that she didn’t throw her baby in the river. She threw pregnancy pads out.

Back at the precinct, they get down to the bottom of things realizing that she never carried the baby but her egg was used. The person who carried her baby was Christine and she thinks maybe that’s who killed Ezra.

Malcolm comes home to find his mother and his sister who have bad news about Ethan. They found out that she’s a human rights attorney and that she may have infiltrated her self into the world to find more about the surgeon, their father. They think that Eve is connected to the girl in the box. Just as they finish selling milk him this eve shows up and confirms that it is true the girl in the box was her sister. He runs off. Malcolm becomes so angry he throws his phone. Seconds later it beeps. It’s Dani and they found Christine. He tells his mother and his sister he has to go, this is something he can solve.

Malcolm meets up with Dani. They head to meet Christine, who has been beaten up. She tells them that her husband did it and that he’s the one who killed Ezra. They realize that he’s probably after the mother and her baby. They rush to find him or the mom. Malcolm manages to find the mother and the baby will the rest of the teamwork to find their killer.