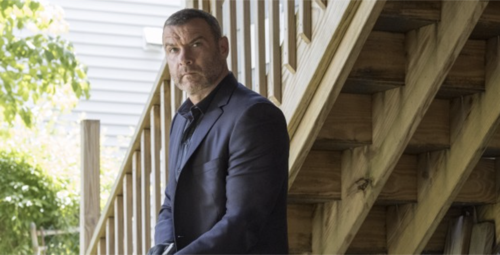 Tonight on Showtime Emmy Award-winning drama Ray Donovan airs with an all-new Sunday, January 5, 2020, episode and we have your Ray Donovan recap down below.  On tonight’s Ray Donovan season 7 episode 8 called,  “Passport and Gun,” as per the Showtime synopsis, “Gary O’Malley seeks justice from the Sullivans, while Ray and Smitty must cover for their own actions. Daryll calls Jasmine with an opportunity that lands them face-to-face with Declan Sullivan. Terry and Bunchy head back upstate to settle some unfinished business with the Shaman.”

Tonight’s Ray Donovan season 7 episode 8 is going to be exciting.  So be sure to bookmark this spot and come back from 10 PM – 11 PM ET for our Ray Donovan recap.  While you wait for our recap make sure to head over and check out all our Ray Donovan news, recap, spoilers & more!

Ray Donovan opens with Jim in the car, he orders a massage and acupuncture. Jim gets out of the car when one of the sons of his recently murdered cohort takes a shot at him but misses. Jim says to heck with O’Malley, he is a piece of shit.

Jim’s daughter is awake, she asks if he slept. Ray says the first time he met her father, he was ten years old, he was looking for his father with a kitchen knife to kill him – her father sent him back home. She gets a call, then says oh my God.

Daryll has the briefcase, he calls Jasmine and tells her to bring their passports and his gun – she is wondering what is going on.

Ray passes a broken water main on his way to the office, he finds Smitty sleeping on the couch. Ray sends him out to buy coffee. He tells Ray he was brought in by the detective, he didn’t say anything different. Ray gets a collect call from a detention center, it is Gary O’Malley.

Gary is upset, he says Jim thinks he can get away with murder, he killed his father and wants to get even with that piece of crap – he has pictures to prove it. Declan shows up at Ray’s office, he asks him if he couldn’t find anybody better to screw than his sister Molly. Ray asks him why he is there, Declan wants the stocks that Darryl has. One way or the other, Declan vows to get back what belongs to them.

Ray calls Bunchy and asks him to stake out Daryll’s place.

Terry is in the hospital, the woman who saved his life, tells him that she had to hand over her emeralds to the shaman, and when she asked for it back, they said she gave it to them to keep. Delores asks Terry to get it back, she wants to give it to her daughter before she dies.

Ray visits Gary, his brother Ronnie has his dad’s old tapes to blackmail Jim who he thinks killed his father.

Terry calls Bunchy for a ride, he needs to go upstate now.

Jasmine arrives home, she grans the passports and the gun, then leaves.

Ray returns to the office, he loads his gun. Smitty asks if he needs help, he says no – but ends up taking him with him.

Jasmine arrives to see Darryl, she is being followed by Strictland. Ray goes to erase the tape that Gary was talking about, he knows that Darryl was the killer and he needs to bury that. Smitty sees Ray erase the tape.

Terry goes to see the shaman, he tells him that he is there for Delores’ necklace. The shaman tells him to forget this false quest. Terry can still kick ass, he gives the shaman a beating. Bunchy walks in and tells the shaman to tell Terry where it is, or else. They get the necklace, Terry and Bunchy leave.

Smitty tells Ray that he thinks all the time about when Terry said, whatever happens between he and Bridget, he can’t leave the family because they killed all those cops, does he think about what he did. And, Daryl said Ray went crazy on that cop and shot him like twenty times. Ray says he got what he deserved. Smitty is wearing a wire.

Daryll is in bed with Jasmine, when Stictland Sullivan shows up at the door – he wants to make a deal. He offers Daryll two million, Daryll tells him to come inside. Daryll says ok, they can meet in an hour.

Ray goes back to see Gary, he tells him there was nothing on the tape. Gary says it was working the last time he checked, he doesn’t understand. Ray says he will call a lawyer to help him. Gary asks if he is still working for Sullivan, after what he did to his family and his sister. Gary is furious, he tells Ray to go ask Sullivan himself what he did to his sister. Ray is wondering what Gary means.

We see a young version of Ray, he brings Jim a rare baseball shirt that he collected from someone who owed Jim money. Jim tells him if he needs anything at all, he should go see him. Jim gives Ray and picture that it is on his wall.

Darryl is with Jasmine, outside by her car, making plans about a one-way ticket to Antigua when Sullivan shows up with the cash. Daryll looks in the bag and sees that there is not two million dollars in the bag. Sullivan brings someone with him, who pulls a gun on Darryl. Sullivan tells Daryll to open the trunk, Jasmine turns around and pulls a gun on Sullivan. In their getaway, Jasmine is in the car with Daryll and gets shot.

Jim has fallen asleep with a drink beside him when his daughter shows up and sees the box of tapes beside him. She manages to retrieve the tapes she is looking for without waking him up.

Daryll is driving around, he is freaked out that Jasmine is now dead beside him, he can barely look at her.

Ray is in his office having a drink when Smitty asks if he can stay there again, he says yes. Ray goes to leave, he sees a white van parked outside his office. Ray returns inside to speak to Smitty. Ray asks him to take his shirt off. Smitty says he didn’t have a choice, the detective was going to come after Bridget. Smitty takes off his shirt, he is wearing a wire, he says he is sorry. Ray leaves the office, the cops come out of the van and tell Ray to get down on the ground. Ray says you want to talk, let’s talk.