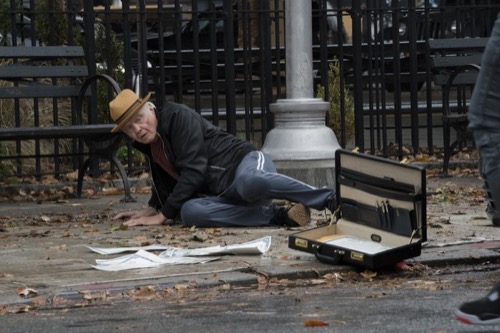 Tonight on Showtime Emmy Award-winning drama Ray Donovan airs with an all-new Sunday, January 19, 2020, episode and we have your Ray Donovan recap down below.  On tonight’s Ray Donovan season 7 episode 10 called,  “You’ll Never Walk Alone,” as per the Showtime synopsis, “Ray finally learns the truth about his sister Bridget’s death. Meanwhile, Terry reckons with the death of a friend and his own mortality, and Mickey’s quest for the money he’s owed comes to a head.”

Tonight’s Ray Donovan season 7 episode 10 is going to be exciting.  So be sure to bookmark this spot and come back from 10 PM – 11 PM ET for our Ray Donovan recap.  While you wait for our recap make sure to head over and check out all our Ray Donovan news, recap, spoilers & more!

Ray is still in the country, he pulls over, he opens his trunk, takes a body out that is wrapped in garbage bags, slings it over his shoulders and walks deeps into the woods. We go back to the evening before when Ray was with the detective in the forest. He asks her to keep his daughter off the stand.

Daryll has a knock on the motel room door, it is Bunchy, he tells him to pack up his things, they are getting out of there.

Terry is brushing his teeth and hears a newscast, Delores Young jumped to her death, she had been diagnosed with ovarian cancer.

Ray meets his daughter, asks if she is ok and if he can take her somewhere, she says somewhere quiet. They sit on a bench overlooking the water, she says she doesn’t know ho she can forgive Smitty, he says that he was trying to protect her and he hugs her. She starts singing to him. Ray says he is taking her home.

Terry stops by to see Arty, tells him that his friend jumped to her death. He asks if he knows who Linda Rondstadt is, she got the same disease as him. Arty asks him how long he has been thinking of suicide, he says for a while.

We see Ray digging the hole to bury the body that was in his trunk.

Smitty is with Mickey, who wakes him up with coffee and breakfast. Bunchy arrives with Daryll. Mickey asks where the papers are, Daryll tells him to speak to Ray. Bunchy asks Mickey what he is doing with Smitty, he is a rat. Daryll tells Smitty if he doesn’t stay away from his father, he is going to end up dead. Mickey says it is not fair, Daryll says it is math. Smitty gets up and leaves. Mickey puts on his hat to leave and looks Bunchy in the eyes.

Ray is home, Molly is there, she says she has been listening to the tapes and there is something he should hear.

Molly plays the tape, his sister was pregnant. Ray starts crying, she says she is so sorry. He feels bad, she should have called him, he could have done something. He tells her that he has to go.

Back in the early days, Bridget wants to cancel on Jim and Ray tells her that she doesn’t cancel on Jim Sullivan. Then we see Ray sitting by the water again, this time alone.

Mickey is with Smitty, tells him to confess his sin’s to God after that Bridget will be a piece of cake and he will feel better. They sit on the step, Smitty talks to God, Bridget calls him and asks him to please go home, they need to talk. Smitty tells Mickey it worked, he is going home. Mickey tries his turn at asking God’s forgiveness, then his cell phone rings, he is told the original deal fell through for the paper, but there is another one and this one is good.

We see Ray still digging the hole. Then we see Bunchy, he is with Daryll and asks him what happened.

Jim calls Ray and says he is worried about him, asks if he got the papers. Ray says yes, but he is not going to bring them to him, he should join him at his office.

Back in the early days, Jim was having sex with Bridget, that is why she didn’t want to go there. Bridget goes to the bar, she shows Jim a pregnancy test that is positive. He asks what is he supposed to do with that. Then he reaches into his pocket and gives her a whole pile of cash, Bridget walks away.

Ray calls Molly, says he heard what she said about them and he wished it would be possible, but it’s not. She guesses that it was her father, he says bye Molly.

Smitty arrives home to see Bridget, they kiss. Terry goes to a highrise and thinks about jumping. Ray is still seen digging the hole.

Back to Bridget and the pregnancy, she goes to a payphone and calls her father, but can’t reach him. She is in front of a planned parenthood building and walks away.

Ray takes his briefcase out of his car and goes into the office. He hears someone with a gun, it is Mickey who tells him to put the briefcase on the floor. Ray says it always comes down to money. Ray asks him if this is the legacy he was talking about, Mickey says he did it all for him. Ray tells him that Bridget was pregnant when she killed herself and Jim Sullivan was the father. Ray kicks the briefcase over to Mickey, who walks away with it.

Bunchy gets a call from Ray, he tells him that Mickey took the stalks and he needs to follow him.

Smitty and Bridget are in bed, he tells her that Mickey has something big that could make everyone rich. Bridget tells him to forget about the money, she just wants to go somewhere, maybe Los Angeles.

Declan goes to see the broker that Mickey was dealing with, he tells her that he wants to know the person who she met with.

Back to the old days, Bridget walks up the stairs, leaves her purse on the railing and goes to the rooftop. Ray is still digging the hole in the present and he sees her in front of him. Back to Ray’s office, Jim Sullivan arrives and asks him if he has the papers, Ray says yes. Jim says they have to celebrate. Jim starts talking about nothing and Ray gets up and stands in front of him. Ray asks him what he did to his sister. Jim says he doesn’t know what he is talking about. Ray asks again what he did to her. Ray them shoots him in the head. Back to Ray digging the hole, the hole was to bury Jim’s body.

Terry goes up in the Empire State building. Smitty buys flowers for Bridget. Ray buries Jim’s body. Mickey is sitting in a coffee shop when Smitty comes in and asks him what is going on. Mickey says nothing comes without a price. Mickey meets up with who he thinks is the dealer to exchange cash for the paper, he doesn’t recognize the guy and all of a sudden, Declan gets out of a car and pulls a gun on him. Daryll arrives and he kills Declan, then he pulls a gun on Mickey and says he did this. Bunchy screams Daryll’s name across the street. In the meantime, Smitty has been shot when bullets passed.

We see Terry at the top of the Empire State building again, Briget is in the window waiting for Smitty to come home, Mickey is walking down the street with his papers, Ray has buried Jim.