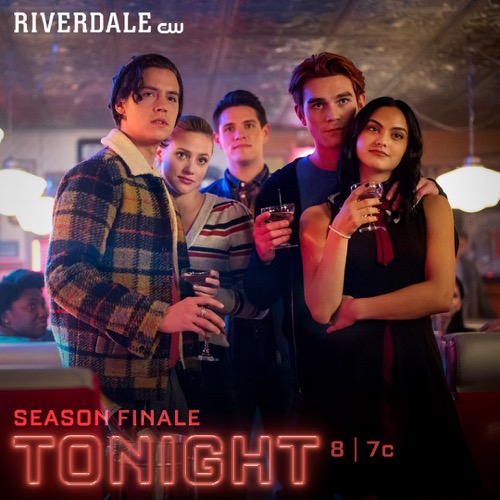 Tonight on CW their drama Riverdale airs with an all-new Wednesday, May 6, 2020, season 4 episode 19 called, “Chapter Seventy-Six: Killing Mr. Honey,” and we have your Riverdale recap below. On tonight’s Riverdale season 4 episode 19 as per the CW synopsis, “After receiving a letter from the University of Iowa asking him to submit a story.

Jughead works on a twisted tale about the gang’s revenge fantasy against Principal Honey for all the ways he’s ruined their senior year.”

We open up with seeing the snuff film showing Jason Blossom murdered by deal old dad in a bizarre recreation of it. Jughead thinks the guy is trying to recreate their deaths or near-deaths. Betty thinks it may be a rehearsal for actual murder. Betty goes to finish proofing the yearbook and deposits it on principal Honey’s desk. He then tells her that there will be no yearbook this year because the deadline for the printer was two days ago. She said yes, but she called the printer to get an extension. He says his decision is final.

Jughead gets a call from the admissions coordinator at the University of Iowa, he has to write another story. Betty tells the gang that Honey refuses to print their yearbook. First, most of them are banned from prom and now this. Literally the only people going to prom are Archie and Jughead. Betty says the only way to stop Mr. Honey is to kill him. Or, scared him enough to leave town.

She says they can dress up, arrive at Mr. Honey’s office just before he leaves, knock him out and take him down, tie him up, and put him in the trunk of a car. Veronica says they can take him to her family’s cabin in Fox Forest. Betty says it is one way they could get revenge. Or, Reggie says they could pull off a senior prank, the links of which will never be forgotten. And he is just the one for Mr. Honey, it’s an oldie, but a goodie.

Mr. Honey receives a phone call, he goes to take the phone and his hand is stuck to the phone, he has to be taken out of the school in a wheelchair by the fire department. Betty says she still thinks they should have killed him.

Jughead writes his story: Mr. Honey is tied up in the cabin when he guesses who the guys are in masks, Reggie pulls off his mask and hits him in the face several times. Once Mr. Honey was secure at the cabin, they took turns watching him, Cheryl was first. Mr. Honey tells her that it is not too late, she can make this right. He tells her that he never took her to be a follower.

She says true, but they have a common enemy now, him. She tells him to agree to make a video saying that they can go to prom and that they won’t get punished for this or anything ever again. He suggests an alternative, release him and call the police and tell them it was a school prank that went bad. She tells him that it is his funeral.

There is a new videotape, another recreation. It turns out that Jason Blossoms snuff video wasn’t the only contraband that Blue Velvet had.

Next, it was Archie and Veronica’s turn to watch Mr. Honey, they find him on the floor, he is dead.

At school, Mr. Honey comes over the intercom and says unless the person who did the prank comes forward, prom is canceled. Reggie says he is not turning himself in, he didn’t prank alone, Kevin and Archie helped him. Archie reminds everyone that Reggie is not the enemy, Mr. Honey is. Betty tells them to research Mr. Honey’s closet and see if he has any skeletons in his closet.

Back to Jughead’s story, Betty tells everyone not to panic, it was a terrible accident and they shouldn’t let it ruin their lives and future. Veronica asks the gang who has experience in getting rid of a dead body. They start digging the hole for Mr. Honey’s body. The next day they talk about prom when they find out that Mr. Honey’s glasses were found in the woods and they are sending out a search party. Then there carefully constructed plan started to unravel because of Reggie. In the locker room, he hears guys say that they are glad that Mr. Honey is gone.

Reggie says that he didn’t run off, they found his glasses, but Honey will never be found because – Archie jumps Reggie and tells him to shut up, he doesn’t know what he is talking about. Reggie is killed, Cheryl is hysterical, Jughead says he was out of control, he was spiraling and out of control, they had no choice. Veronica asks if they had to cut his breaks, he was a friend. Betty says they didn’t cut his breaks, he never took care of that car. Archie tells Veronica that people think Reggie died in a car accident, they need to leave it there and move on. Jughead says they are all monsters, it just matters if they want to be monsters in college, or jail.

Betty finds a pattern, Mr. Honey has canceled prom at every high school that he has ever worked at. Everyone goes to their parents and tells them that Mr. Honey is canceling prom, they get their parents after him. And, off the parents go to the school to have a conversation with Mr. Honey. They demand that he reinstate the prom. He says that is impossible, it is canceled because of their behavior. They all threaten him legally, with negative press and muscle.

Cheryl has an announcement to make as Student Body President. She tells everyone that prom is officially back on. She proposes a toast to generations united and a prom that they will never forget.

Charles and Mr. Honey call Betty and Jughead into Mr. Honey’s office, there is a new videotape but it is simply taking footage of the inside of school. Mr. Honey says it looks like a threat and he has no choice but to cancel the prom. Betty and Jughead leave, Charles takes the tape. Jughead thinks this could be a hoax. Betty thinks that Mr. Honey made the videotape, it is not the same as the others. Betty watches the whole video and she finds something, an image of their guy on the tape.

Betty and Charles go into Mr. Honey’s office, she shows him a screengrab of the video and asks if it is him. Betty tells him that it is enough to get him, he used the voyeurs’ mo to ramp up his personal feud against the children of Riverdale. Mr. Honey says he is trying to help them. Betty says she already sent copies to all the parents and with the FBI here, he is done.

Mr. Honey packs up things, he is leaving the school. He tells the gang that they didn’t win, he stands by everything that he has done, it was all to make the school better and safer. He says that the thinks that going around here are not normal. Betty says it is normal to them, and that is why they stopped him. He says he is the new headmaster for Stonewall prep, his salary is triple, he has been preparing for this.

Archie says screw, Mr. Honey. The secretary walks in and tells the gang that she is ashamed of them. Mr. Honey was the best principal that the school has ever seen. And before he left, he wrote an amazing letter of recommendation for Jughead.

Jughead changes the ending to his story, they end up calling 911 and save Mr. Honey. Betty asks why he rewrote it, he says he was reveling in the pain of another person and that was wrong. Betty receives another video, she and Jughead watch it together. They see the cabin where Veronica’s mom killed the guy she had the affair with. Betty goes to get her keys and they head to the cabin. Jughead opens the door, looks inside with a flashlight, and finds a makeshift screen and a projector. And, there is a VCR with a videotape in it, Betty plays it. It’s a video of Jughead being killed by his friends.