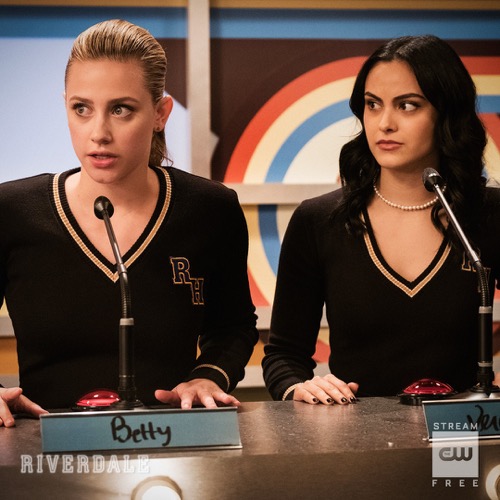 Tonight on CW their drama Riverdale airs with an all-new Wednesday, January 29, 2019, season 4 episode 9 called, “Chapter Sixty-Eight: Quiz Show,” and we have your Riverdale recap below. On tonight’s Riverdale season 4 episode 11 Fall Finale as per the CW synopsis, “Determined to give Frank a second chance, Archie gives him a job at Andrew’s Construction.

Betty channels her energy into taking Bret down and defeating Stonewall Prep at the Quiz Show Championship, while Veronica and Cheryl team up for an unlikely business venture. Finally, Kevin’s date with a new suitor takes a strange and unexpected turn.”

The Regional RIVW Quiz Show came around. Everyone was excited about it and no one more so than Betty. She was going to be leading the team for Riverdale High School. She was in it to win and she really needed that win. Betty has been down lately ever since she found out Jughead got into Yale. Its been a dream of theirs to go there together and he got in while she didn’t. She also has to contend with the fact that Bret got into Yale. There was no way someone like him would have gotten it and not her. Betty had needed answers. She thought about it and she knew the best person to ask would be her brother, Charles.

Charles was the one they turned to whenever they needed help. Betty asked him to dig up some dirt on Bret and he complied. He found out Bret paid someone to do his PSAT for him. He also found out that Bret’s father used his money and his connections to cover up the scandal. Bret’s father tends to do that a lot with Bret. He protects his son no matter what and he probably paid to get Bret into Yale as well. Betty was furious when she found out. She marched into the boys’ dorm room and she confronted Bret.

She told him how he didn’t deserve to get into Yale. She painted him as a pathetic rich kid and so he said the first thing that would hurt her. He told her that Jughead was basing his Baxter Brothers novel on Betty’s father. It turns out the Brotherhood hadn’t wanted Jughead’s original idea. They wanted something darker and sinister. Jughead tried researching other serial killers. He even pitched them to the Brotherhood though none of them were as good as his “Brown Hood” idea. Jughead’s best writing comes from when his own experiences and so writing about Betty’s father was easy for him.

There was just one problem with doing so. It was the fact that he was doing this to Betty and how she found out about it. Betty should never have heard it from Bret. He only mentioned it to get under her skin and it worked. Betty lashed out at Jughead. She got into a huge argument with him and she told him that he only got into Yale because he was going to Stonewall. Betty didn’t mean it. She was merely lashing out because she was in pain and her problems only got worse instead of better. Betty’s brother found out why she didn’t get into Yale.

Betty didn’t get into Yale because the school didn’t want the Black Hood’s daughter to attend. They thought it would bring about negative press and that it could lead to problems with her fellow students. There was nothing Betty did that got her rejection letter. It was all her father and so Betty continued to spiral out. She went to her father’s grave. She went at it with a sledgehammer and she was pummeling his headstone into rocks when her mother found her. Alice was able to calm down Betty.

Alice also called Betty’s boyfriend once they got home. Jughead later came over and he supported his girlfriend. Betty wanted to go to Yale. Jughead thinks might know a way of getting Betty in. He just needs time for this plan to come together and until then it was up to Betty to do brilliantly at the quiz show. She had to beat Bret now. She was incredibly smart and she had an amazing team. She had both Veronica and Cheryl by her side. The girls have proven themselves very clever and there was no greater example of that than their liquor empire.

The two of them had created a maple-based rum. It was just different enough that Veronica’s father couldn’t sue them over the patent and so the ladies tried launching it at their club. It was a big hit for a while before Hiram found out. He brought the police and he shut down the club while he destroyed their liquor supply. Hiram was going to keep doing that until they let go of selling rum and so the girls found a way around him. They reopened the bordello. They were going to use the Maple Club to sell their liquor and they were going to use their club as a front for their real company.

Cheryl even convinced her mother to run the Maple Club again. Her mother was desperate and the girls needed someone to eat, breathe, and live at the club. So, they made a deal. Cheryl’s mom would run the place and Cheryl and Veronica would use to move their liquor. The girls were so proud of themselves that they thought they would kill at the quiz show and instead it was all Betty. Betty was given the answers to the questions before the show. She could have used them and she didn’t. She ripped them up and won the competition based on her genius.

Only someone found the ripped sheet in the waste bin. They put it back together again and they brought it to Bett’s principle. She was called out as a cheater. She lost the trophy and she was suspended from school. Her mother also got into trouble. It was Alice that gave her the answers and so Alice has been put on leave without pay. And with the both of them in trouble, Jughead grew so upset that he challenged Bret to a duel to the death and four weeks later it was Betty in tears with Archie trying to cheer her up.

Archie has been MIA lately with his uncle Frank in town. He put Frank in charge of his father’s company and the man “borrowed” money that wasn’t his. It angered Mr. Keller who promptly quit and it made Archie question his uncle’s motives. He later forgave his uncle for what he did, but he lost several competent people on the construction crew. And so that’s why he wasn’t paying attention when Jughead tried to duel someone.