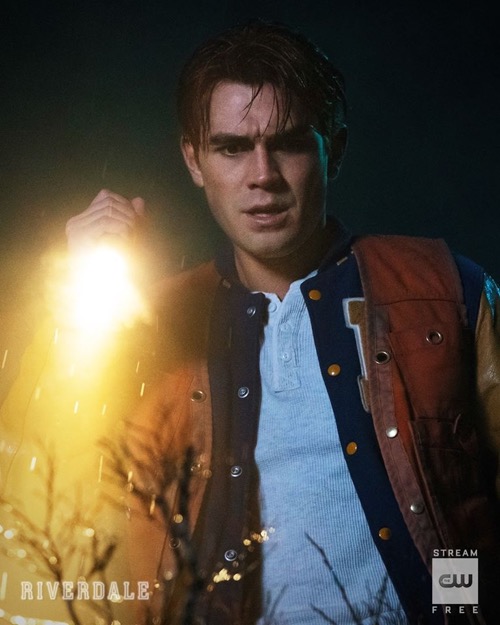 Tonight on CW their drama Riverdale airs with an all-new Wednesday, February 26, 2020, season 4 episode 14 called, “Chapter Seventy-One: How to Get Away with Murder,” and we have your Riverdale recap below. On tonight’s Riverdale season 4 episode 14 as per the CW synopsis, “When a night in the woods goes horribly awry, Betty, Archie and Veronica are forced to confront what one of them may be capable of.”

The show opens with the ominous voice-over from Jughead that the moment we have all been waiting for finally happened. Three friends in the woods in their underwear.

Archie throws Jughead’s beanie on the fire and in case you by chance missed it Jughead points it out. Back in the car on the way back to Riverdale, not a word is said by any of them. Veronica is the first to get home. Her parents ask her where her clothes are. Veronica with her years of practice quickly comes up with a story about playing an intense game of strip poker at Stonewall Prep. She heads upstairs. Archie is next he tells his mom he was at a Stonewall party and they stole his clothes as a prank. Up to bed, he goes. Betty stutters through her lie and just keeps digging herself deeper and deeper toga party this, red wine that… left her clothes in a sink. It’s bad. Should have listened to the Jughead voice-over and gone over the story they were going to tell. When her mom calls out some of the nonsense and asks about Jughead. Betty panics says she is tired and flies up to her room. Jughead says that’s the thing about a murder who has to have the stomach for it. As if on Q Betty runs to the bathroom.

When the three finally do decide to talk alibi they realize they have three vastly different stories. Betty worries that their parents will compare notes. You know what I would worry about…talking about having committed murder in a restaurant full of people…but maybe that’s just me. Betty agrees that they all just said the first thing that came to mind. Archie thinks maybe they should have called someone besides Charles. Well, you know what they say coulda, shoulda, woulda. Betty pish poshes that and says Charles was the perfect person to call because he has a lot of experience with you know dead bodies. Veronica reminds Betty that they found her standing over Jughead with the bloody rock in her hand. Betty says she is aware of that and she picked up which is stupid because “they” are clearly trying to frame them. Veronica says they barely know me. Betty says fine it’s me they are trying to frame me. Betty says it’s the only thing that makes sense. Betty says they have to be smart about this. Little late for that no? Betty says that they can’t let them get away with it. Veronica thinks they wouldn’t want Jughead dead. Betty thinks it’s a game or maybe an experiment to see if “they” can commit the perfect murder. Kevin comes by and Archie sends him on his merry way. Betty calls him back though because she is all about looking and acting as normal as possible. Betty asks 20 questions while Archie and Veronica’s exchanges sideways glance.

Archie gets offered a place at the Naval Academy. Veronica’s dad changes his will. Veronica rips it up and walks out. Betty calls and talks to F.P. Its a pre-written message that Charles gave her. He asks if she is ready to go to the Lions Den. Betty says she thinks she is. Charles gives her a bug to plant inside the Lions Den. Betty starts talking to Brett and Donna. Donna tells her she remembers her and Jughead walking into the woods together. Betty tells her that Donna was the one that walked into the woods with her. Donna claims Betty was drunk and then makes a comment about wondering if Betty blacked out. Betty keeps saying no to everything. When Donna turns her back Betty puts the bug under a table. Betty asks Brett about that night and he claims that Forsythe claims he went into the woods with Betty. Betty says that’s also not true. Betty tells Brett that Forsythe wanted to meet him in the woods. Just to be clear Donna makes Betty say she did not meet up with Jughead in the woods. Betty says she and Donna were the ones in the woods together. Donna asks her what happened next. Betty doesn’t remember. Donna suggests she call the cops if she is that worried. Betty tells her she called Jughead’s dad and he is the Sheriff sooooo…. Brett comments that that is interesting. Donna tells him to shut up. She then tells Betty if they hear anything they will let her know. On her way out the door, Donna tells Betty to let her know if she remembers anything from you know when she blacked out.

Veronica and Archie are drinking and discussing their woes. Veronica’s dad refusing to admit he is sick and his mom wanted to send him off to the Naval Academy. They finally get around to Betty and her whole-rock dilemma. Veronica asks why she had the rock in her hand. To which Archie logically points out that it’s because she picked it up. Veronica says why would she do that. She isn’t the only one wondering that. Archie asks her what she thinks happened. Veronica thinks that maybe Betty had an “Episode”. Veronica thinks she did it and then blacked out and doesn’t remember it. In the meantime, Betty goes to see Evelyn.

Betty asks Evelyn if a girl named Donna came to see her for a little chit chat. Evelyn confirms its true. Betty tells Evelyn that Donna told her that Evelyn told her about a word that would trigger Betty. Evelyn says a magic word that would cause you to harm someone you love. Evelyn asks her what’s bothering her. Betty flashes to holding the rock. She tells Evelyn that she went to a party last night and she thinks she blacked out. Betty wants to know what she is capable of. Evelyn tells her she already knows and she has a question for her. Evelyn asks Betty how Jughead is. Betty tells her to go to hell. Evelyn tells her she is already there and pretty soon Betty is going to be joining her. Never Ever never go to Evelyn for help. (See what I did there?) Betty goes to see Charles who is listening to the going on his bug is picking it up. Turns out it’s nothing fascinating unless you have a thing for watches. Betty wants to shake things up by shaking them up.

Archie finds out that her mom is dating Brook who is the recruiter for the Naval Academy. His mom’s all about honesty. Betty knocks on the door and walks in. She asks Archie if he has a minute. Archie tells her yes.

Betty wants him to go to Stonewall and start a fight with Brett. Archie isn’t too sure. But he does it anyway. Archie demands he tells him what he did to Jughead as he kicks his ass. Archie tells him he knows he killed Jughead. Donna calls the cops. Before Archie leaves Brett tells him not to be stupid and get dragged down with Betty. Donna and Brett find the bug. Donna tells her that she has to up her game if this is going to be any fun. Charles says the are smart they just have to be smarter. Now Archie is in trouble with his mom for beating the snot out of Brett. His mom wants to help him. Betty calls and tells him to shut up and pretend Veronica called him. So Archie tells her about Veronica’s dad.

Betty gets caught with Jughead’s cellphone in her jacket by F.P. His dad wants answers. Betty claims that Jughead thought he lost his phone. But he must have just forgotten. F.P. thinks it’s a lie. So Betty says they should declare him a missing person. She tells Veronica and Archie. They think Donna planted it on her.

F.P tells Betty he has to get the rock and test it. Betty goes into her yard gets a rock and puts a bunch of fake blood on it. Charles goes to see F.P and changes out the real rock for the fake one.

Veronica is about to get drop-kicked out of college. So Veronica wants the truth about everything. Veronica asks Betty what really happened. Why did she pick up the rock? Betty knows she should have been keeping Jughead’s brains in his head. Betty tells her she thinks she blacked out and that there is a trigger word that causes her to hurt people. Veronica thinks if Charles helped her with that once he can help her again.

Charles is trying to help Betty with the trigger word while Veronica and Archie stand back and watch. Charles wants her to remember what happened up to the blackout. She sees herself with Donna in the woods and she mentions the trigger word but all we see is Donna throw white powder in her face. Charles thinks it was the devil’s breath. He also doesn’t think Betty killed Jughead.

Betty meets Donna in the woods and tells her she knows everything. She tells Donna she or one of her friends killed Jughead. Donna tells her Jughead’s body will never be found because if it is Betty will go down for it. Betty wants to do something that will blow Donna out of the water. They start looking for Jughead. Archie takes them right to him. Betty goes to the morgue with F.P. They confirm it’s Jughead. Donna and Brett walk in and Betty pushes them and screams for them to get out and slams the door in their face.

Archie’s mom sees him reading the newspaper and asks him if he wants to talk but she does all the talking and crying. Archie tells his mom he has something to confess. Veronica and her sister want to be co-owners of their dad’s company. Betty is in the woods when Donna shows up. Donna is upset that she gave up the body. Betty tells her if she is going down with her. Betty tells her she is the wild card and she is coming for the psycho bitch that is Donna. Back at Pops, the three decide to wait and let them make the next move.