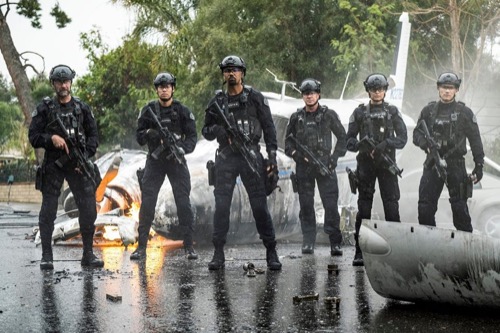 Tonight on CBS their new show S.W.A.T. inspired by the television series and feature film airs with an all-new Wednesday, May 20, 2020, episode and we have your S.W.A.T. recap below. On tonight’s S.W.A.T. season 3 episode 21 finale called “Diablo” as per the CBS synopsis, “The SWAT team searches for a group of drug smugglers who crash a plane in a Los Angeles suburb and scatter, after a joint mission with the DEA to stop the shipment goes awry.

Also, Hondo tries to make amends with Nichelle, Luca experiences anxiety about his return to the field, and Deacon hesitates when asked to speak to a group of recruits about mental health.”

The DEA approached SWAT about a joint mission. The DEA wanted help. They’ve been investigating Nelo Venegas also known as El Diablo who was the head of the El Septimo drug cartel and the cartel itself was known for bringing heroin into the United States. The DEA has never been able to prove it before now. The cartel has been very careful in their dealings with the US and so the DEA only knew they were moving a shipment thanks to a federales. The Mexican police force had found the evidence. They passed it on to the DEA in spite of the risk to their own lives and one agent died making sure the Americans knew the truth. And so now the DEA wants to make their move.

They told SWAT that El Septimo has been using the Baldwin Hills Airport. The DEA was going to carry out a raid and SWAT was to act as their backup. This was the first day back for Luca. He was warned the mission wouldn’t be easy and he wanted to take it anyways because he needed to prove he was still his old self. Luca joined the rest of his team as they waited in the wings at the airport. He and the others waited until the airplane carrying the drugs came in and they moved to arrest them as the plane was landing. However, the pilot thought he could take off again and so he tried to put the plane back into the air.

The SWAT truck was in the plane’s path. They ended up clipping the truck as they tried to take off again and this caused one of the wings to catch fire. The plane was forced to land a few miles away from the airport. The men inside took this opportunity to flee on foot and so it became difficult for SWAT to wrangle them all. Their simple mission soon turned into a manhunt and the dogs were called to pick up the trail. The team was going to split up in order to sweep the whole area. Only shots were fired at the nearby park. They heard an officer was down and so the team had to respond.

The team went to the park. They ran into a member of the cartel who was firing on two officers and so the team offered support. They came in. They removed the downed officer and they had taken him to safety. Tan and Luca tried taking the officer to the hospital. He sadly died on the way there and so the team had to break the news to his partner. They also took care of the cartel member in the park. They managed to get them thanks to the K-9 who took down their suspect for them. The team had arrested their suspect and they were transporting him when they noticed his tattoo.

The cartel member’s tattoo identified him as La Mano. He was one of the chief bodyguards to El Diablo and if he was here in the states that meant El Diablo was nearby as well. He must have been on the plane. The team and the DEA didn’t realize that was the case until they identified their suspect by his tattoos. It was the tattoos that told them everything. It also told them they had this one chance to take down the biggest heroin supplier in the south and they couldn’t miss it. SWAT searched street cameras. Hicks and his people spotted El Diablo close by. They sent the team to the area.

The team later found the jacket El Diablo had been wearing in the security footage. He ditched behind a couple of houses and so the team started visiting all the houses asking if anyone saw anything. They eventually came across one man who was acting very shifty. He tried to get rid of them and so they asked him where his family was. They saw pictures behind him but heard no sounds in the house and so he let them know something was wrong. Deac and Hondo moved on the house. The rescued people inside that were being held, hostage. They also arrested two cartel members. And they were still looking for El Diablo himself.

The team was searching for the neighborhood. They even checked the homeless area and Luca found a young boy surrounded by his parents’ drugs. He took the boy. He handed him over to Children Services and he arrested the parents. Luca was doing his job as Lynch found out something important. She found out that El Diablo has a connection in the area. His southern distributor lived nearby and so El Diablo was most likely heading there. The team had needed a name and Lynch got it for them. She played a dirty trick on someone’s girlfriend. The girlfriend spilled secrets and now the team has a name.

The team had just learned the name when Street and Chris came under heavy fire. El Diablo had made it to his friends and, with backup behind him, he was now fighting back. The cartel was firing upon the two officers. They called in backup and they were on their own until their friends arrived. Chris and Street both killed two members each. They were trapped in an apartment complex with five members breathing down their necks, but thankfully someone came to their air. A stranger opened her door and she let the officers hide in her apartment. They hid there until their friends came and then they got back into the fight.

Chris had injured El Diablo. She revealed to her team that he was bleeding heavily from a wound to his leg and so that was bound to slow him down. The team then searched the whole apartment complex. They later found El Diablo. He had taken a woman hostage and they were trying to talk him down when he began talking wildly. He said that what happens next isn’t on him. The team had a shot and they took it. They killed El Diablo and now they don’t know what it is he was talking about. He implied there was going to be an event. Hicks even feels like this wasn’t over and so El Diablo’s death might have put something in action they can’t stop.

The team all dealt with the difficult day they had. Deacon suggested a fellow officer speak to the therapist that’s been helping him out and Hondo tried to make things right with Nichelle. Only Nichelle couldn’t be found. She wasn’t at the center and she was ignoring his calls at first. She thankfully answered when he tried again. Hondo talked to Nichelle and he apologized for his behavior earlier. He wanted to make things right and he couldn’t. She said they were at different points in their lives. She didn’t want to get back together if it wasn’t going to last and so they had to end things. It was just the way it was.