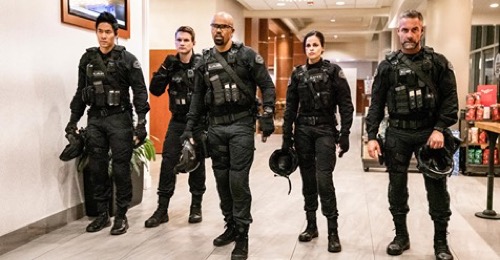 Tonight on CBS their new show S.W.A.T. inspired by the television series and feature film airs with an all-new Wednesday, March 4, 2020, episode and we have your S.W.A.T. recap below. On tonight’s S.W.A.T. season 3 episode 14 called “Animus” as per the CBS synopsis, “The SWAT team searches for a link between the seemingly unconnected victims of a lone gunman targeting women.

Also, Luca assists with a homicide investigation in his neighborhood; Lieutenant Lynch pushes Chris to do a news interview; and Hondo reaches a juncture in his relationship with Nichelle.”

Hondo is on a date with his lady. She heads to the bathroom and he heads outside. He runs into an old flame who’s interested in rekindling a romance with him. He tells her that he is taken just when his new lady comes out the door.

Luca is in his apartment doing rehab when he hears gunshots. He runs out with Jim to find gang members he is familiar with. Marcos and Big Roy tell them how their friend has been shot and they came running. They were not responsible. Luca has to take Marcos in.

Look ahead to the office and put in a request for extra coverage in his neighborhood. Meanwhile, Alonso is told the mayor wants her to take part in a news article about the day in the life of a SWAT member. She tells the chief she isn’t interested.

And the nearby office a shooter walks in and kills several people. The team arrives to investigate. They have three victims with 30 rounds fired. It looks like they already have a person of interest in a man named Chad who recently lost custody of his children. One of the victims was a lawyer who oversaw the case. Hondo in the team picture Anna up at a seminar he’s running called Casanova camp. Back at the precinct, he swears up and down that he was not involved in anything illegal and didn’t hurt anyone. Within minutes of alibi checks out he’s clean.

Hondo’s old flame shows up at the precinct as she works in the legal field. She asks all about Hondo’s new lady and if they’re serious. Hondo tells her that they’re getting serious about getting serious. His ex believes that they’re both cuts from the same cloth and there’s no way that Honda is going to settle down.

Jim notifies the team a new call has come in about a mass shooting at a sorority house. The team heads there. The team heads in finding victims throughout the house as they clear the area. It looks like their shooter is on the run.

Outside of the sorority house, they talk to one of the victims who says that the mandated her sorority sister but when the sister ghosted him he became violent and angry. The team catches a lead and heads to the address for the suspect. Their suspect is there but he’s been there all day with another girl recording her unbeknownst to her knowledge. It looks like they’re back to square one looking for the shooter.

The team gets back to the precinct to learn some new developments from Luca who has been digging into the case. It looks as though they are guys have been venting in a chat room and someone else is carrying out their wishes.

Luca meets with Marcos so they can talk about who might be the shooter in his neighborhood. Marcos is annoyed he has been locked up.

Alonso meets with the woman behind the website with the chat room where the men have been venting. The woman is ant-feminism and advocates for men who she thinks have never had it harder. As soon as they tell her about the shootings, she sits to help flag the most aggressive users.

They narrow down to one suspect and head to his home. He isn’t there but they find hid dead girlfriend. They discover he may be on his way to a seminar where there is a female speaker that is one of his targets. They stop him before he can get to her after he shoots a security guard and terrorizes the place. Alonso takes the fatal shot, saving the woman and everyone around her.

Luca gets his shooter and shares the news with Marcos who agrees to work with the DA.

Alonso shows Hondo the thousands of new comments made on the forum, hate comments about women. He tells her they are going to keep fighting and they have her back. They get the word about a new mass shooting in Kansas. Alonzo heads to the chief, she wants to do the interview.

Hondo sees his ex on the way out of the precinct. He turns her down for a drink and heads to fond hid lady. Alonso sits down for her interview.