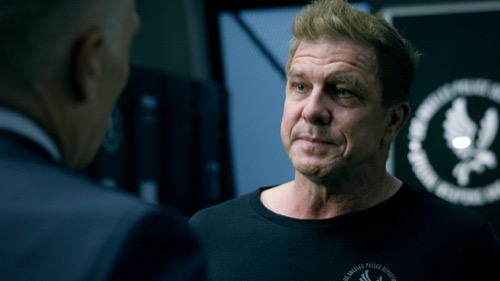 Tonight on CBS their new show S.W.A.T. inspired by the television series and feature film airs with an all-new Wednesday, March 18, 2020, episode and we have your S.W.A.T. recap below. On tonight’s S.W.A.T. season 3 episode 16 called “Gunpowder Treason” as per the CBS synopsis, “The SWAT team’s search for an abducted teen leads them to a member of the Witness Protection Program and a decades-old political extremist group.

Also, Hondo and his girlfriend disagree over a guest speaker at her community center; Luca worries he’s not physically ready to return to the field; and Commander Hicks reconnects with his estranged son.”

Nichelle and Hondo had their first fight. Hondo was asked to help her with setting up the community center and he did so without issue. The problem wasn’t helping her. It was what the event was for. Hondo found out Nichelle had the rapper FarKrai coming in to talk to the kids and he has a problem with FarKrai. The rapper once did a song about killing cops. He’s evolved since then and he’s given back millions of dollars to the community, but FarKrai still hangs out with the same bangers that did when he was growing up and Hondo personally didn’t like him. Hondo tried to talk Nichelle out of the event.

Nichelle told him it was fine. She had made the decision after a lot of thought and she believed FarKrai would better understand the kids than anyone else. She also believed that a song about killing cops couldn’t be taken literally. She said the song was about his frustration with the system and so she wasn’t going to rescind his invitation because of it. Nichelle also reminded Hondo that she didn’t need his permission. She was a grown woman and she can make decisions for herself. Nichelle and Hondo’s first fight had not been pleasant. They both walked away angry and Hondo had no time to process it before he had to go to work.

Hondo’s team was called in for an abduction. The abducted child was Zane Coleman. He was sixteen and he was attending a party when a masked group of men showed up. They called Zane’s number to find him the crowd. They then grabbed him and fled in a car. They later changed cars and so SWAT couldn’t even use that to find them. They were, fortunately, working under the suspicion that Zane was being held for ransom. His father is an investment guy. He comes from money and so everyone was hoping Zane was taken for the ransom, but later evidence contradicted their initial assessment.

The phone used to call Zane led back to a Joel Powell. He lived in Zane’s neighborhood and he had several pictures of Zane around. Almost as if he was stalking Zane. The team did some background search on Joel Powell and they found nothing. His past was completely fabricated. He seems to have been in the Witness Protection Program and his obsession with Zane later made sense. It turns out Powell is Zane’s biological father. He went into the Witness Protection Program and his then-girlfriend didn’t follow him. Leah chose to remain in the open and so she received full custody of their son. She later met a new man when Zane was three and Mark Coleman later adopted him.

Mark was never told anything about Zane’s biological father. His wife told him that the relationship ended before Zane was born and that the man out of their lives. Mark was now asking several questions and Leah wasn’t there to answer them. She was on a plane back from Europe. She wasn’t going to land for several more hours and so the team tried contacting the US Marshals directly. They were waiting for them when they got a tip-off. They found out from some UFOS conspiracy theorists that Zane had been moved to a different car and so they followed this new car. It led them right into an ambush.

They dealt with some explosives and they heard from Powell that “they” took his son. The real story didn’t come out until much later. Powell hadn’t actually kidnapped his son. He was fine with watching Zane from afar and so it was the people that once testified against that were doing this. Powell’s real is Quinn Burnett. He was apart of an extremist group known as the Accord and his roommate Cassata was the leader of this group. Cassata had wanted to kill people to make everyone fear them and so he hired Burnett as his bomber. They were friends and that all changed because Burnett didn’t have in it in him to kill people.

He drew a line at that. He testified against his friends and they went away for a twelve to the eighteen-year sentence. Unfortunately, they were recently released. They must have found Leah and they used Zane to lure out Burnett. They still wanted Burnett to build them some bombs. They had him create two suicide vests. He was wearing one of them when SWAT found him and diffused the bomb. Burnett said the second vest had been given to Zane. Zane had been taken to a new location and Burnett knew where. It turns out the Accord didn’t hide their plans from Burnett because they all figured he was going to die. And that was their mistake.

Burnett survived. He also knew the Accord was going to be hitting a bank and so SWAT raced there. They spotted Zane the moment they reached. They tried to help and there was nothing they could do. The best thing they tried was putting a tracker on him. Zane had been sent into the bank to rob and he was allowed to go back to Cassata with the money. But Cassata had planned on killing Zane the moment he got the money and so that’s when SWAT moved. They took down the Accord and Cassata got away with Zane. He managed to drag the teenager down into the subway. They got onto a train and both Deac and Tan had caught up with them.

The two police officers had gotten onto the train with Cassata and Zane and the train left the station. The rest of the officers allowed the train to make their usual stop. They were going to meet up with the boys at the next stop and until then Tan and Deac worked to get Cassata away from Zane. Once they separated them, Deacon deactivated the bomb and they arrested Cassata. It a weird turn of events Zane now knows his biological father. He also knows his father never abandoned him and that he was loved. And so that more than anything was a great result for the team.

Hondo also talked about Nichelle with Chris and she offered some sage advice. Hondo later went to the event at the community center. He was on his best behavior and this time he supported Nichelle. He even threw in an apology. He and Nichelle were able to talk it out and they’re better than ever now.

Hicks meanwhile decided to try and work on his relationship with his own son JP.