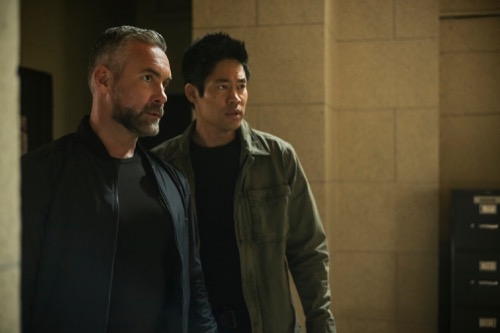 Tonight on CBS their new show S.W.A.T. inspired by the television series and feature film airs with an all-new Wednesday, March 25, 2020, episode and we have your S.W.A.T. recap below. On tonight’s S.W.A.T. season 3 episode 17 called “Hotel L.A.” as per the CBS synopsis, “The SWAT team must protect a hotel full of civilians after a joint task force mission with the LAPD Gang Division goes wrong, and the city’s most dangerous gang leaders scatter across the building to find an escape.

Deacon hangs out with a friend who’s in private security. They talk about his work until Hondo arrives. They talk about SWAT’s new mission. They have several gang leaders to attend to. Meanwhile, Jim and Alonso talk. He thanks her for saying nice things to his girlfriend on his behalf. Alonso tells him he wasn’t supposed to know about that. He is surprised she did that after their mini hook up. She tells him not to bring it up.

SWAT is on a stakeout on the rooftops in the city and on the ground. They watch as several top leaders of gangs make their way into a hotel. Inside the hotel, several gang organizations meet to talk about their interest in moving products safely. They don’t realize the room is tapped and that the team is listening in. Downstairs in the bar, a young woman who is dating a gang leader drinks at the bar with another member.

Her dad comes in from out of nowhere and tells her that she is leaving with him now. They get into an altercation and the man is shot after telling the gang member he is a sheriff deputy. SWAT has no idea what is going on. They rush into the scene to find the deputy. He tells him that the gang member took his daughter hostage somewhere in the hotel.

The gang member who has the daughter calls his leader to tell him what’s going on. Several of the leaders of different games also get messages and start to leave the room. Hondo and the team manage to locate the sheriff’s daughter and her boyfriend.

Luca is on the scene helping the sheriff who is bleeding. Luca’s brother shows up with a video recorder. Luca tells him to get back behind the tape. Meanwhile, inside the hotel, a female gang leader finds a cleaning lady and demands by gunpoint that she gets them out of there.

Hondo is informed that Anna, a cleaning lady, at the hotel has been taken, hostage. He is also told that a tech billionaire in on the hotel grounds. After quickly assessing their options, Honda goes back in. Luca and Hicks watch the cameras in the hotel. Hicks calls for them to break into teams of 3.

Hondo and his team meet another employee, Anna’s husband. He shows Hondo that his wife has been leaving marks with a sharpie on the wall, a bread crumb trail. They take the man with them, keeping him behind Jim. They come to an exit door. Anna and the gang are on the other side. The team is ready for them to come through. When they do, Hondo and the team take them down. Anna is reunited with her husband.

Another gang member crawls through a hotel window and shoots an officer. Luca’s brother is nearby and pulls the officer behind several cars, texting Luca. Hicks tells him to sit and the team will handle it. Hondo comes in for the save. The rest of the team takes out more of the gangs’ members.

Hicks and the team realize they have one more gang banger left. They watch the cameras as he moves through the 11th floor. The gang banger takes several people hostage. The tech billionaire is one of them. He tries to talk him into taking her hostage, she is rich and will be easy to handle. He decides to let the others go and takes her to the roof. Hondo and Alonso are out there. The gang member tries to jump to another rooftop with the woman but falls. Hondo grabs the woman in time. She is grateful and asks his name.

Luca and his brother reunite, hugging. Jim checks on Alonso at the precinct. The talk. He shares he is happy but misses her. He didn’t tell his girl about their kiss. She tells him not to, it was before her.

Deacon starts to worry when he hears that a concert promoter hasn’t reached his private sector friend Buck all day. They start talking about how no one dies old in SWAT. What will they do? What is Buck going to do? They joke about golf but really what are they going to do when. There are no more missions.