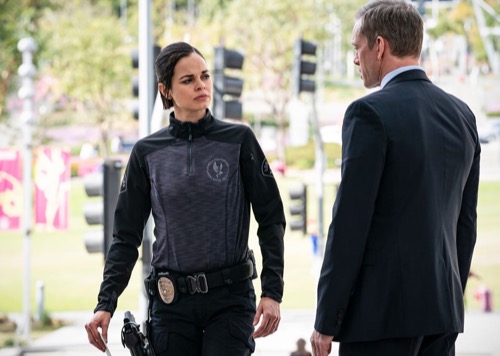 Tonight on CBS their new show S.W.A.T. inspired by the television series and feature film airs with an all-new Wednesday, Aril 29, 2020, episode and we have your S.W.A.T. recap below. On tonight’s S.W.A.T. season 3 episode 20 called “Wild Ones” as per the CBS synopsis, “The SWAT team pursues a couple reminiscent of Bonnie and Clyde, when the duo goes on the run and on the hunt for a set of rare chest pieces worth millions.

Also, Hondo and Darryl are surprised when Darryl’s ex-girlfriend visits with his young son, and Luca confronts his fear of failing his requalification to return to the field as he helps Kelly, his mentee.”

Chris believes the Deputy Mayor is coming after her. She had arrested his son for driving drunk and later the Deputy Mayor Carter had had his son released. He also didn’t just stop at having him released. He had him released without charges. Deputy Mayor Carter had crossed a line when he did that and Chris wants to call him out on it. She believes his son should be charged for what he did. She now wants to make sure that happens and so Carter was now standing in her way. He was even threatening her family. He had her uncle fined for a garage structure and Chris went to him to demand that he stop. She told him her family wasn’t involved in this. She wanted it to be a fair fight between him and her and Carter refused to bend. He was going to come after her no matter what.

Chris knew this. Yet, she couldn’t do anything about it. Chris’s family had been threatened and her job had been threatened as well. Deputy Mayor Carter had mentioned how far SWAT must have fallen for her to be a part of it. Chris tried not to take what he said to heart and she did her job. She and the rest of her team were called out a scene. There was one dead body, four civilians shot, and two perps that had gotten away. The perps were a male and female team. They were dubbed Bonnie and Clyde because of the similarities. It seems this new Bonnie and Clyde had gone looking for someone at brunch. And they followed him through a crowd as they eventually killed him inside a store.

The victim was a John Doe. He had no identification on him. He merely had a cellphone and some money. The money was useless. The cellphone was not. Their John Doe had taken a selfie with the perps in the background. The team now knows what they look like and they could run the picture through facial recognition. The perps were later identified as Beau Walker and Harper Kerris. The couple was wanted already for shooting up the bar where Harper worked. The man was also wanted for jumping bail. Beau had taken part in a theft of some expensive chess pieces that were worth a million dollars each and he had two partners. His partners decided to cut him out when he went to jail and so they weren’t counting on him jumping bail.

The dead guy was identified as Bobby Reese. Reese was having lunch with someone when the other man left and that’s when he was found by the couple. The couple opened fire at the café. They hunted down Reese and killed him. They now just needed to kill the other guy. The couple wanted those chess pieces and unlike what the team thought – Harper wasn’t some clueless girlfriend. She was in on everything. She was the one that got close to the tech guy who owned the chess pieces and she worked him while her boyfriend stole from him. Beau and Harper were in this together. They were equal partners and that meant they were both dangerous. Harper couldn’t be trusted and if anything she might actually be the brains behind it all.

The team went looking for a couple. They found a hotel the couple had used and they learned while they were there that some other cops had just searched the hotel room. The team checked with other police forces and there was no one else on their territory. So, there was a police department acting in their area and without their approval. The team couldn’t figure out who these people were. They also couldn’t waste time looking for them and so they went back to looking for the couple. They believed they found them. They went to the site and they found the second partner that had been working with the couple. And they came across the supposed other cops who turned out not to be real cops.

The other cops were in fact, bounty hunters. The bounty hunters should have notified local police that they were in the area and they didn’t. They were flouting the rules. They wanted to stay under the radar because they didn’t want to miss out on collecting fifty grand for Beau. The bounty hunters were taken to task for operating without the okay and their guns were later returned to them. But the team was still looking for Beau and Harper. They talked to Reggie who had been their partner and Reggie revealed what really happened. He said Harper had lied to him and Reese and that she claimed the chess pieces were merely worth thousands. They didn’t find out how much they were really worth until they saw the news.

This was when Reggie and Reese came up with the plan to screw over the couple before they could screw over them. The two stole the chess pieces and they brought to a guy who could get them a fair price on it. Reggie told SWAT were with a guy named Arthur. They went after it and unfortunately, they were a little too slow. Beau and Harper got there first. Only they didn’t get the chess pieces. Arthur wasn’t at his work. He was at home and SWAT did get there first. They found Arthur. Arthur handed over the chess pieces to them and so now they have it. They got it before the couple did only the couple isn’t stopping. They’re still out killing people. They want the chess pieces and they might go on the run if they find out the team has them.

So, the team came up with a ploy. They used the bounty hunters to lure out the couple and the plan worked. The couple came to get the chess pieces. They were separated and the team got Harper and not Beau. Beau tried to flee the scene. He was killed while doing so and that became the end of it. Chris was now free to focus on her own problems. She still needed to deal with the Deputy Mayor and she received some help in that quarter. She had Lynch help her. Lynch told her what to do. She later recorded the Deputy Mayor as he admitted covering up his son’s crimes. There were other DUIs he made disappear. The Deputy Mayor can now either get his son help or the press was going to get the tape of him confessing to a whole bunch of crimes.

The Deputy Mayor chose to retire early. He quit his job and he was no longer in power. Chris and her family now don’t have to worry about him. And so Chris was there with the rest of the team when Luca qualified to rejoin SWAT.

Luca is back and Hondo had even helped his godson Darryl.

Darryl met his son Deon and it was bittersweet because his ex-girlfriend’s parents still didn’t.