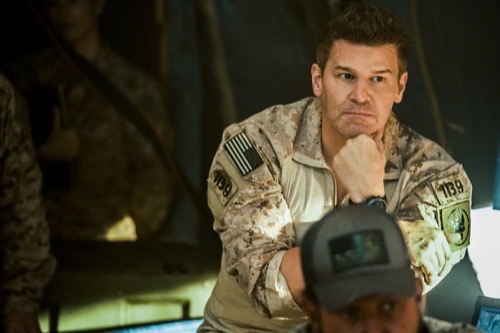 Tonight on CBS their new military drama Seal Team airs with an all-new Wednesday, December 16, 2020, episode and we have your Seal Team recap below. On tonight’s Seal Team season 4 episode 4, “Shockwave” as per the CBS synopsis, “Warrant Officer Ray Perry goes missing following an explosion in Tunisia, his former teammates wrestle with how to help their brother and his family while Bravo Team is sidelined.”

Following the explosion, dead bodies are everywhere and crumbled debris. We see Ray, he is not moving, but his eyes are open. He sees some people getting shot. Someone walks near him, stands above and points their machine gun at him.

Spenser tells Hayes that he had a late night at the bar. All of sudden, they see a lot of brass coming out of the elevator. Hayes says he is going to go see what happened. Hayes finds out that there was an attack at a café in Tunesia; a suicide bomber followed by armed assailants. Perry was in the café, his status is unknown. Perry was not found amongst the dozen of casualties onsite, and nobody has heard from him. Hayes says they have a missing Seal, all hands on deck. Lindell tells Hayes to stand back and let them do their job.

Hayes joins the other Seals and he tells them that command is looking at options. Spenser tells him to get them over there. Hayes says Lindell doesn’t want to send them, there is nothing he can do.

Hayes goes to Perry’s house to give the news to Naima that Perry is missing. She said she always had comfort that he had his team with him and she hates that he was alone. He tells her that he doesn’t have any more information. An official is going to reach out to her, and if he was her, he wouldn’t watch the news. She asks what she is supposed to do, what would Ray want. The rest of the team also show up and give their support. They all reminisce about Ray and how great a guy he is.

Blackburn goes outside, Spenser follows him. He says he can’t be there, lying to Ray’s wife, and they he ripped into him. Spenser tells him not to make it worse by leaving. He blamed Ray for Bravo falling apart. Spenser tells him that he will get a chance to make it up to him. And for now, this is the mission. Hayes goes outside too for fresh air. Stella arrives, she says hi to Spenser.

He tells her that he didn’t realize that she and Naima stayed in touch. Stella asks if there are any updates, he says no. Then he tells her that he is sorry that she never heard from him after. It wasn’t fair of him to never respond, and he is glad that she is there. She brought food, he tells her it is nice of her to do it. Meanwhile, Quinn goes to see Perry’s daughter and asks if she is ok.

Quinn tells Perry’s daughter that they are going to get her daddy home safe, he promises. She says he went missing before. Quinn says they found him last time and they will find him again. She asks him if it is possible for her daddy to get two miracles, he says yes.

The team talks about going to get Perry, they want to go. They start arguing and Hayes tells them to knock it off. Spenser tells Hayes that it doesn’t feel right. Back at command, Davis says a canvas of the local hospital has not found Perry. They have alerted local authorities while keeping his cover. Some of the team are tasked to go get him, but they will be on different teams.

Spenser is loading the dishwasher at Naima’s house, Stella is still there and asks why he didn’t leave with the team. He says he thought he was doing the right thing helping someone out. They benched him and now he is riding the desk for who knows how long. She tells him he won’t be there for long.

Hayes gets a call from Echo One, all is quiet. Then they see footage of Perry being dragged into a car, he is a alive. Meanwhile, Perry is being hung by his hands, he can barely see, but he makes out some men walking around with guns. He sees his hands tied up.

Spenser tells Naima that Perry is alive, there was a video. They have a whole task force that is going to go look for him. She asks if Hayes will be there, Spenser looks away.

Hayes goes to see Lindell, he says he wants back in the fight. Perry is out there, he needs his help. And, he wants to go back with Bravo, and they are a lot stronger with Clay Spenser. Lindell starts shouting that he is doing his best. Lindell gives in, he will give him back Bravo, but not Spenser. Hayes tells him again he needs Spenser to get Perry out alive. The team is all together, Spenser walks in, everyone is thrilled.

Bravo is in a plane, when they touch down they are going to move quickly. Spenser sits down with Hayes and thanks him. Hayes says it is one mission, after this, it is life after Bravo. Spenser says he is focusing his energy on getting Perry back.

Davis tells Hayes that she is praying that they get demands for a ransom soon. Bravo has landed. The team gets briefed on the mission. The task force will operate as one unit, Hayes is not happy about it and give his opinion on how it should go down. There is more emphasis on search than destroy. Meanwhile, Perry is inside the building and one of the men gets a phone call alerting him that they see vehicles, the man says they will be ready and hangs up. Then he gives orders to prepare their soldiers and be ready.

Bravo is going in, Hayes gives the orders. Right away a bomb goes off and then the gunfire starts. Perry is trying to get his hands loose, he stands on his feet and tries hard to get free, he knows they are there for them. A man comes in and cuts Perry’s ties from the wall, he falls down. The man tells him to move. Perry is walking, he hits the man and starts to run.

We can see Perry still running, he is now going downstairs, then an alleyway. Perry gets stopped by one of the capters and screams when he sees Bravo going into a building. A black bag is put over his head and he is captured again. Perry fights and fights, but they get him into an SUV and drive away. Inside the building, Bravo finds nothing. They capture a video from a cell phone, they were twenty minutes late. They are offering Perry in exchange for a valuable group. Hayes is upset, Perry was in that room and he let him slip away.