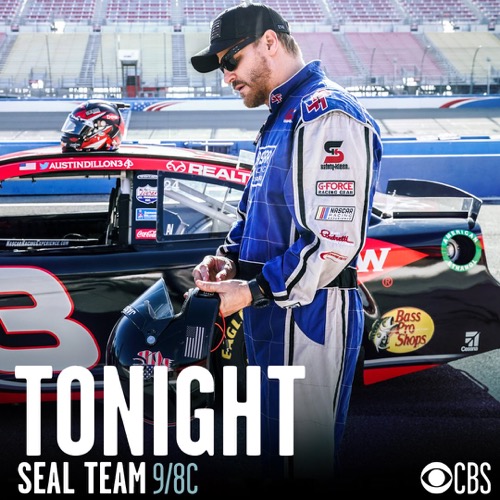 Tonight on CBS their new military drama Seal Team airs with an all-new Wednesday, March 11, 2020, episode and we have your Seal Team recap below. On tonight’s Seal Team season 4 episode 14, “Objects In Mirror,” as per the CBS synopsis, “Bravo Team travels overseas for a foreign training exercise to disguise their true mission – to rescue a high-value target that is being held, hostage. Also: NASCAR driver Austin Dillon gives the team a special driving lesson.”

The team has just been briefed on their latest mission. They leave in four hours. Clay goes home to get his things when Stella shows up. She is driven all this way to tell him that she still in love with him. He tells her that they can’t really talk at the moment because he’s on his way out the door. She doesn’t want to complicate things they can talk later. She tells him to come home safe.

In the air on their way to the mission, Clay tells Sunny about Stella. Sunny guesses that he is thrilled but clearly doesn’t appear to be so.

The team lands and meets their counterparts. It’s obvious these two teams aren’t going to mesh well. When they all sit down to go over strategy their counterparts are a little snarky. Sunny thinks he’s going to show the Russians how great the bravo team really is. They have a shooting contest. Sunny nails it proves he’s one of the best.

Jason and Ray walk the grounds with her staying. Eyes are constantly on them with cameras and guards. They wanna be able to get out get their target and go home but it’s looking impossible when a soldier comes up to them noticing their Americans and asking them what they’re doing. They’re supposed to be supervised at all times.

Well, the Bravo team teaches their counterparts how to train, Mandy, Davis, and Blackburne work on a way to get them through gate three on the grounds without being seen.

Night falls and in just a few hours part of the team will head out at gate three. Suddenly their counterparts come in want to celebrate with drinks, party a little before they all fly home in the morning. And alarm sounds. The guys ask what the alarm is all about. They are told that the base is on lockdown, nobody can come in or out.

Jason and the guys talk to the leader of the other team into taking them out. He tells them that the place is locked down. They challenge him and give him a hard time. He gives in and gets them through the gate. They head to a club.

Jason and some of the guys disappear from the club to go do their mission. Unexpectedly, their target goes on the move. With help from the team remotely, Jason and the others track down the vehicle follow it for a little bit before they slow down and take out the enemy and grab their target. They get in the car and leave. They head back to the club as fast as they can.

Meanwhile, their counterparts at the club are getting a little curious as to where the rest of the team is. Ray and Sunny make jokes to buy time. Jason and the others show up with whiskey, top-shelf. All id forgot. They all get back to partying.

On the way home, Clay and Davis talk. He tells her about Stella. Davis tells him to pursue what he wants, history isn’t everything.

Ray and Jason talk about the past. Ray is having a problem and looks to the past to help guide him. Jason doesn’t know how that would help. The next day, Ray faces his problem head-on and is commended by his superior.

Jason goes to visit Natalie. He asks her about her past marriage as a way to prove he is opening up and all in as he told her he was. She tells him a brief rundown. He picks up on her lack of enthusiasm and effort. He realizes that is how he has been acting and she just gave Jim a dose of his own medicine. He finally breaks down and shares how he met Alana when they were 14. He remembers everything she said to him, but he doesn’t remember everything he said to her. Before she died though, he remembers everything he said and wished he could forget it all, he shares as he tears up.