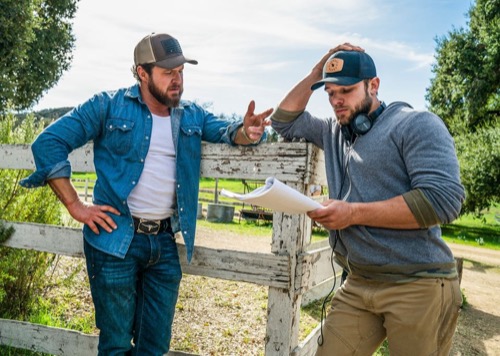 Tonight on CBS their new military drama Seal Team airs with an all-new Wednesday, April 8, 2020, episode and we have your Seal Team recap below. On tonight’s Seal Team season 4 episode 17, “Drawdown,” as per the CBS synopsis, “The team begins their deployment in Afghanistan during peace negotiations. Sonny reports to an Air Force base in Texas to serve his disciplinary training action where he gets reacquainted with Hannah, a childhood friend.”

Jason and the team arrive at Camp Larkin. He heads to his bunk and signs a date under his name. Later, Ray takes several pictures around the beast sends his daughter to show that he is OK.

Davis, Mandy, and Blackburn talk about how bravo is getting antsy. They’ve been there for three weeks without anything to do yet. The guys sit around with their counterparts putting off a small green and talking about how nobody has heard from Sonny.

Sunny walks into a bar and takes to see. The lady that force him of whiskey he realizes he knows from eighth grade. He and Hannah taco a little bit. She bought the bar and he shares that he’s going to be working in Laughlin for a while.

Jason and the guys put their makeshift bar back together. The plank that is the top has names of their former team members who have passed on. As they sit and reminisce several explosions go off on the borders.

Sonny and Hannah sit sharing whiskey and talking about their lives. He talks about his father and how things are still the same. Hannah tells him that she sees his dad from time to time, he comes into the bar alone. Sonny apologizes to Hannah for ghosting her when he enlisted. He shouldn’t have done that she deserved better.

Davis makes a friend at the shooting range. She offends him when she calls in a contract worker.

Bravo team arrives to eat. They run into Mandy. She tells them how the ambassador’s name has been cleared. They get word that Davis has a new op for them.

Later that night, the team makes their way through the dark into the front door of a home in a village. One of the targets tries to run from them slipping through a tunnel on the floor. Jason knows all the tricks when he realizes a dresser has been pulled over it.

They rush outside and find him as he comes out on the other side. The dog leads them back inside to the common room where they discover a tunnel underneath the form boards. Ray heads down first and discovers something big.

Davis has been on surveillance throughout the night. She knows the enemy is out there even if things have been quiet. She needs intel, she tells Mandy.

Hannah and Sonny arrive at his dad’s farm. Sonny looks around sad, the dark used to have life, livestock. Hannah says hi to his dad. Sonny doesn’t say much. Hannah gets dinner out of the car. She has tricked him. They are going to stay and eat.

Team Charlie members are in the same room as Bravo playing video games. One of the Team Charlie members outs Clay. He overheard him talking to his girl on Skype. Clay is leaving to STA-21. Jason comes in at the wrong time and learns about all of this. He explodes. He cannot believe Clay would come to this mission and decide to do this. He is a distraction. Clay chases after him. He tells Jason he has been running the same missions here he has in the past and the base is shutting down. They are on a merry go round. Jason tells him to pack his bags.

Sonny and his dad get into a fight at dinner. Sonny brings up how his dad left him at his grandmother’s when he was 8. He hasn’t been a father since.

Davis is brought to a superior with Mandy’s help. She thinks the peace dam is about to break and she needs more intel to prove it. The superior has been working on turning the base down and he needs more than a hunch.

Sonny heads to the barn and finds his teenage car, a Trans Am in mint condition. It looks like his dad cares more than he thought.

Jason is mad, sitting at the bar. Mandy comes to listen to what is going on. Jason explains that his team is a mess. Ray is worried about home. Clay has one foot out the door. Mandy thinks Jason is doing all of this to justify the decision he has made, how his whole life is the team. Later, Jason watches as Clay leaves and doesn’t say a word.

Bravo is given a new mission. They are to meet the Taliban. They want to make peace. Jason and the team go ahead with their Afghan military counterparts leading the way. When they arrive, things are unclear. It looks like they could be in the middle of an ambush. They all end in a standoff but after a minute Jason gets them to lower their guns. They listen. They head into the village to find their Afghan counterparts. All they find are hands. One has a watch on it. It is the watch Jason gave his friend Jack.

Clay arrives at his new home. He looks sad and disappointed. Davis heads to the shooting range. Her superior is there. He tells her she has uncovered the next chapter in what will be a war.

Jason and the team raise a flag and a drink for their friend Jack. Jason swears Ray will make it home. Ray tells him they need Clay. Ray heads to call the family. Ray asks if he needs to make a call. He tells Ray no, he is where he needs to be.