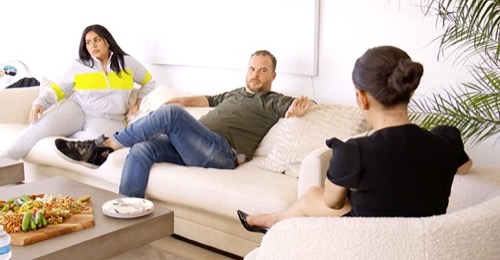 Tommy and MJ meet with a lawyer to discuss Reza’s charges against them. Reza unleashes his anger on Nema for meddling in his personal affairs.”

Cat and Destiny meet for breakfast. Destiny tells her she is working to get out of her head. All these accusations and drama from Adam and Ali are upsetting. The switch subjects and talk about her dating. She shares how she hooked up with a friend’s brother and now her friend I mad at her.

Golnesa and Sara meet with a Reiki expert. Golnesa wants to know why she was pregnant and after losing it, she wants to know if this is payback for past pregnancies she didn’t follow through with. Golnesa has her chakras opened. She can feel the energy. The expert tells her that the next 3 months will be big for her.

Reza is irritated with Nema who is trying to get in his business with MJ. Meanwhile, Shervin and Nema meet with an instructor to learn fighting skills. Nema gets annoyed because Shervin keeps overpowering him. They talk about Reza. They think he is blaming everyone and is really hurt by all of this.

Mike visits his parents. He asks them what they think of Paulina. Both stay silent. He keeps questioning them. They tell him to take it slow, he has said all this before. And none of the women he date end up being the one. They switch the topic to his work.

MJ and Tommy meet with a therapist. They are ready to heal after their ordeal. Tommy cries whenever he thinks about how he almost lost MJ during childbirth. Talking to the therapist, Tommy shares that he lost his mom young and that has something to do with it.

Reza and Adam are looking for cars for Reza’s mother. He wants to buy her this gift to repay her for all she has done to care for him.

Mike shows up at his project. He is overwhelmed. He wishes he had Reza to help. But they aren’t getting along. Everyone is in a fight and Mike has had it.

Reza finds the car he wants his mom to have. Meanwhile, Mike finds out his property is between 2 to 2.5 million. He decides to continue to develop the property. He is going to be the property manager, the appraiser looks at him shocked. Mike hates that everyone doubts him.

Golnesa is at the hospital. She is so much pain. They had to take her fallopian tubes out. She can never get pregnant the natural way. She is very upset. She believes this is her karma. Her parents are there, comforting her.

Mike is in the car talking about Golnesa. He wonders if she can get pregnant again without her tubes.

Destiny and Nema both show up to see Golnesa and comfort her at home. Destiny has dressed as a nurse to care for her. She has brought some laxatives and champagne.

Tommy’s lawyer is coming over. He cannot believes MJ didn’t roll out a nice spread. She gets in the kitchen and makes an appetizer.

Reza, Mike, Sara, and the others come to see Golnesa. She tells them all that happened. The room is quiet and somber. She starts to cry. She wants them all to get along. Mike and Reza start arguing about MJ. Reza is crying. He gets up and leaves the room. When he comes back in, Golnesa tells them they all need to deal with this differently.

Tommy and MJ are speaking with the lawyer. It is a lot worse then they thought. If she is found guilty, he could go to jail. Back at Golnesa’s, the guys hug it out. Reza wants to try and rebuild with MJ who is at home seething.