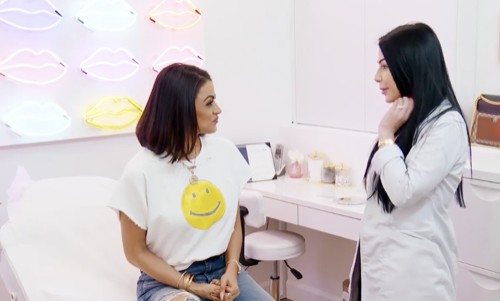 Nema prepares for his Boots ‘N Brews event; the entire crew gears up for the event, prompting MJ and Reza to finally meet face to face.”

Golnesa and Destiney arrive to get Botox fillers in their face. Golnesa is trying to make herself feel better after the pregnancy. She also wants to forget about MJ and all the drama. They used to be so close. Destiney watches as Golnesa goes first. Destiney is freaking out. She hates needles. Golnesa laughs at her the whole time.

Reza and Mike are at the arcades. After they play, they eat a bunch of food. Reza talks about how he and Adam are having problems. They get into the MJ situation and Reza realizes he needs to apologize for some of the comments he made to her.

MJ and Tommy are in the car with her assistant. MJ tells them that Reza has texted her to apologize for the comments and insults he has made. He asks her to meet. Tommy goes crazy. He cannon believe Reza’s audacity.

Nema is walking the grounds of a location that will host a country music show. He has invited everyone and he hopes they can all get along. Meanwhile, Destiney arrives at a hotel to speak with the front desk. Her boyfriend is coming to visit and she wants to have the perfect room with everything set up. Minutes later, Sam shows up. Destiney has a ton of plans for them.

MJ calls Tommy. She is on her way to meet Reza. He tells her to handle it the way she thinks is best. MJ arrives to see Reza who has bought the baby a gift. He puts his sunglasses on as he gets emotional. After some uncomfortable small talk in between the silence, they get down to business. He explains that he’s been in a dark place because he thought his husband was cheating on him and he was told that she knew all about it. He just lost it on lashed out. MJ sits and listens to what he has to say. As he becomes more emotional, she tells him to calm down.

She shares her feelings. He has done horrible things to her, made terrible comments. She is sorry he has been through a lot. He wants to fix their relationship. He isn’t going to file charges against Tommy. They plan to start slow with their friendship. She tells him she has to go for the baby but to text her.

Destiney and Sam sit to have a nice romantic dinner. After some champagne, Sam starts to act really strange and act like an animal, burping and licking her arm. He isn’t using his silverware. She wonders if he is on something. They have been talking for 2 months and he has never acted like this. She is embarrassed in front of the waiter.

Nema is back at the music performance. He directs the drone operator so that he can get the best shots for social media. Meanwhile, the gang gets together dressed in what they think is their country best. Mike can’t stop laughing. Destiney shows up. She is no longer talking to Sam after last night. Golnesa arrives. They all head out. On their way there they talk about MJ. Golnesa doesn’t think she is a nice person.

Nema tells MJ about Golnesa before the gang arrives. The gang arrives. Nema brings them to a private VIP tent where they take photos and drink. They head to eat. During the meal, Mike asks if MJ knew all about the naked Jenga involving Adam. MJ acts innocent at first until Mike tells her to be honest. She admits she did know all about that as well as Ali’s issue. She comes clean and hopes they can all start over. Reza tells her absolutely. Golnesa appears to be rubbing her stomach and seems uncomfortable.

After partying and listening to music, the gang goes and gets ice cream. Golnesa says she needs to lay down. She has piercing pain. They call for help. EMTs show up. They all want her to go to the hospital. She determines that maybe it was because she ate Mac and cheese and she is lactose intolerant. MJ steps up to be helpful. Later, they head home with Golnesa feeling better.