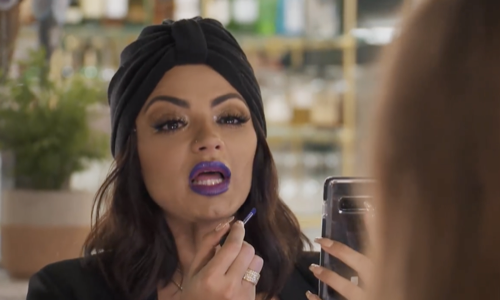 Tonight on Bravo, Shahs of Sunset continues with an all-new Friday, April 17, season 8 episode 11 called “Le’ing With The Devil,” and we have your weekly Shahs of Sunset recap below. On tonight’s Shahs of Sunset Season 8 episode 11 as per the Bravo synopsis, “Mike surprises Paulina with a trip to Hawaii for her birthday and invites the whole crew to come along; after arriving in the Aloha State, tensions among the Shahs come to a boil, making for one unforgettable luau.”

Mike and his girlfriend Paulina talked about Boots and Brews. Mike was hoping the event was a great start at getting his friends back together again and so he thought they could all move on afterward. He so believed this was possible that he wanted to take them all out on vacation with him and Paulina. It was Paulina’s birthday. Mike wanted to do something special for it and he was showing her he loves her by taking her on a tropical vacation. Paulina has said in the past that his friends were dramatic. She didn’t seem that enthused about going away with them. She wasn’t of the same opinion that Mike was about Boots and Brews and so Mike was, really, putting his relationship with her on the line here.

Mike’s plan for the group will only work if they’re getting along. They were trying to do so. MJ took accountability for her actions and she apologized. It just wasn’t enough for everyone. Destiney didn’t want to forgive MJ. MJ was still lying to her up to two weeks ago and Destiney had even cried over it because she felt hurt. She thought she and MJ were like sisters. They were really close and now they weren’t anymore. There didn’t seem like a way for them to get back to their old selves. MJ also tried making peace with Ali. She asked Ali to meet with her and Destiney and MJ said she wanted to be real with the both of them. And it didn’t look that way.

Ali said he improvised certain things. He said MJ didn’t tell him stuff and that he made up. He’s saying this after telling Destiney that it was all MJ. He claimed back then that MJ was calling shots. She was telling him what to say and who to say it to. Ali has now changed his story with MJ there. He’s now saying he made it all up and Destiney isn’t sure she believes him this time. She thinks he changed his story because MJ was there. She thinks his first story was the real one and that now MJ is covering her backside. Destiney doesn’t trust either MJ or Ali. Both of them are so problematic that even Reza’s husband doesn’t want to be around them.

Reza’s husband Adam said he never wants to see or speak to MJ again. He said he’s not willing to even say hello to her. Adam is cutting her out of his life and Reza has to respect it. This is his husband. He loves him and at the same time, he misses the relationship he had with MJ. They were friends for thirty years. They had meant so much to each other that they wanted that back and so now they were each trying. Reza was trying. He apologized to her and MJ was trying because she had apologized to him. They were working on their relationship. Which is what Mike wanted from the beginning.

Mike asked his girlfriend to put together a girls’ night. He wanted her to invited the other women out to drink before they all go on vacation together and he was hoping this would bind the ladies together. The ladies did go out for drinks. Things were awkward at first and then they got to talking. GG talked about her ectopic pregnancy. She said it happened when she was only a few weeks in her pregnancy and so she tried to downplay it like it happened when she was barely pregnant, but MJ was brought to tears by her story and she expressed her sadness over GG’s situation. MJ even asked if she could hug her and the two hugs in god knows how long.

GG said in her confessional that her relationship with MJ is over. She said their friendship was so toxic that she had to break it off and so this hug wasn’t a fresh start. GG merely tolerated MJ. She didn’t want her friendship and Mike’s plan couldn’t work if the women weren’t going to try. Mike later hung out with Nema. They got Botox together and they talked. Nema told him how angry he was. He had finally read the six-page letter that his mother had written and it hadn’t given him closure. It had surprisingly made him angrier. Nema wanted to know why he was taken back to Iran and then permanently separated from his mother. The letter told him that he was taken to Iran on what should have been a vacation.

His parents didn’t want him to see them arguing all the time. His grandfather had convinced his mother to let him go on what should have been a month’s stay and he ended up staying there for nine months. He was traumatized by what he saw there. He remembers armed guards watching them as they did their shopping and he had so many questions because of it. He was so deeply traumatized by his own childhood that Nema doesn’t want kids. He told his mother he doesn’t want kids and she thought her letter would change things. It hasn’t. Nema told his therapist that the closure he’s looking for wasn’t found in the letter and that he needs his parents together and talk to him honestly.

Until that happens, he was going to remain angry about it. Nema later went to Hawaii with the group and their welcome to the island had been amazing. They took part in a welcome ceremony with each other. It got them bonded and they started talking right after that. MJ and Reza discussed Ali. Ali and MJ got really close. He was there for her when her father was dying and so she relied on him. MJ claims she never thought Ali would talk about or tell Reza she said something about him. They also talked about the delivery room. MJ had wanted Reza in the delivery room with her and he admitted he had wanted to be there.

Reza even said that he understood where Tommy was coming from because Tommy supported his wife just like Reza supports his husband.

Reza and MJ had a breakthrough, but MJ soon found another person to get into it with.