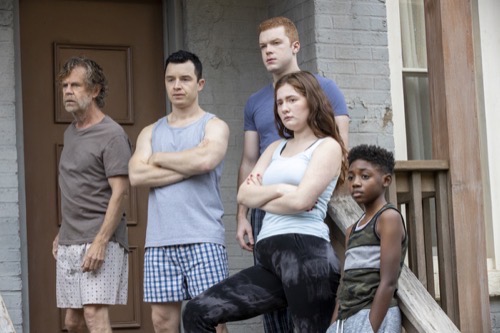 Tonight on Showtime the uniquely twisted and highly entertaining show Shameless returns with an all-new Sunday, December 6, 2020, season 11 episode 1 Finale called, “This Is Chicago,” and we have your weekly Shameless recap below. On tonight’s Shameless episode, as per the Showtime synopsis, “The Gallaghers adjust to life during the pandemic: Frank fears the loss of the South Side to gentrification, while bar closures force Kev and V to get creative at the Alibi.”

Tonight’s Shameless season 11 episode 1 is going to be great, and you won’t want to miss it. So be sure to bookmark this page and tune in for our coverage of Shameless tonight between 9 PM – 10 PM ET! While you wait for our recap, make sure to check out all our Shameless spoilers, recap, news & more, right here!

Frank is being filmed by a reporter, he tells him that the Gallagher’s built Chicago. Meanwhile, Tami and Lip are woken up by the baby crying, he is teething. Tami gets up to get him, she tells Lip to start coffee. He tells her that they should do one night off, one night on with the baby teething. She tells him that she has errands for him to run during the day.

Carl is still in the police academy, he chases a suspect and is able to apprehend him on his own.

V is at home cooking, Kev is shaving his head. In the dining room, Kev has them rolling joints, V tells him to stop, the girls have to get ready for school.

Ian is getting ready for work, Mickey just gets up. Ian tells him that they need more money coming in, his minimum wage job is the only thing that is bringing in money.

Debbie is upset that she has to wear an ankle bracelet because she slept with Julia. Liam walks in the room, Debbie got a package from Amazon. It is a sticker that says, “Debbie Does Everything,” she puts it on her truck to advertise her business.

Frank is still with the reporter, he tells him stories of his version of how Chicago was built, while he drinks whiskey out of Big Gulp cup. Frank is wondering around the city without a max and he tells the guy that Corona is a hoax.

Debbie drops her daughter at school, she tells Franny not to hug the other kids.

Ian searches through a box of IOUs, the wedding money is gone and he needed it for utilities. Ian tells Mickey that it was not his money to use. Mickey tells him to calm down, he will pay it back. Ian is upset, they were supposed to make decisions together. Ian tells him he has to get to work.

Lip is working on his bike, Tami comes in and gives him the list of what she needs him to do. She leaves, he tells Fred that he made a mistake in renting the house, now he is Tami’s slave.

Carl’s superior tells him that he is aware of the irregularities in his application; his age, his IQ score, but with the loss of so many officers because of Corona, they are willing to put him on the street. He is number one in his class, but it’s a tough decision giving him a badge, but he knows he is going to kick ass.

Kev is at his gym, one of his members is upset because bitcoin has dropped, Kev usher’s the guy into the Alibi, where he has gummies and baked goods made with weed. Kermit says weed makes him sleepy, V guarantees this one won’t make him sleepy. Someone knocks on the door, V and Kev remove everything and shout that they are closed and being compliant. It was Frank and his camera guy is at the door, who says to heck with the mayor, he has a right to drink wherever he wants to.

Frank introduces Allan to V and Kev, he is a graduate student and he is making a film of Frank. Allan says his doctoral is the neighborhoods and transition due to displacement caused by the pandemic. V tells him he is at the right place, lots of economic displacement going around there. Frank says gendrification, the ten percenters gobbling up what is left of the working man’s dreams when they are down and out. Meanwhile, Kev’s bitcoin guy passes out from smoking a joint.

Debbie is at a job with Mrs. Lienety, she got an alert notification on her phone, she was alerted that she is a sex offender.

Ian is at work complaining about Mickey, they have been married for six months and Mickey is doing nothing about finding a job and helping out. Meanwhile, Lip drops Tami her coffee, little does she know that he paid $1 for it at the convenience store and went to the coffee store to add the sugar and creamer. She drinks it and tells him that it is delicious.

Debbie is furious, on the sex offender list it says that Julia was seven years-old, not seventeen.

Carl is in court, he says he was asked to empty his bowels in the house, he points to Otis Grange, and says he did it. He is asked if he was promised a spot in the police department for his testimony. Carl says no, he got into it because they know he is going to be a great policeman. Carl lays into the lawyer, asks if he is calling him a liar because he grew up poor on the south side, because his father is a drunk and his mother was a junkie, because he is not as smart as him and doesn’t know big words that he knows.

Lip goes to the hardware store to get the paint that Tami wanted, he tells her it is expensive. Lip looks at the returned cans, and asks if there are any blue. He settles for three of them and gets seafoam mist written on them so Tami doesn’t know the difference.

Carl walks out of the courtroom, he is congratulated by his superior.

Lip is working on his bike, Ian walks in and tells him that the whole marriage thing is harder than it looks. Ian asks him how he handles his cash. Lip says Tami kind of runs things, but there isn’t much to go around so it’s not such a big deal. But since the pandemic, she is worried they won’t have enough. Lip asks Ian why the questions. Ian says he figured that they would just agree on everything. Lip tells him to talk to Mickey, they need to be on the same page.

Ian and Mickey are sitting on the step drinking a beer. Ian says they should have talked about what they expected from each other before they got married. How they spend money, not messing with other people. Carl shows up in her new uniform, grqduation is in the morning. Everyone heads to Lip’s house with food, to help him with the house. Tami arrives home, Lip shows her the blue, she says beautiful and definitely worth the extra money.