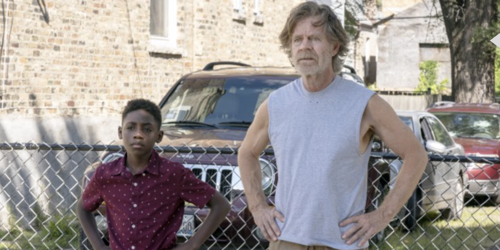 Tonight on Showtime the uniquely twisted and highly entertaining show Shameless returns with an all-new Sunday, January 05, 2020, season 10 episode 9 called, “O Captain, My Captain,” and we have your weekly Shameless recap below. On tonight’s Shameless episode, as per the Showtime synopsis, “Frank returns to the past to figure out his connection to Faye; Carl implements tougher measures to his new cadets; Ian and Mickey find it hard to reconnect.”

Tonight’s Shameless season 10 episode 9 is going to be great, and you won’t want to miss it. So be sure to bookmark this page and tune in for our coverage of Shameless tonight between 9 PM – 10 PM ET! While you wait for our recap, make sure to check out all our Shameless spoilers, recap, news & more, right here!

Ian wakes up to seeing Mickey arriving and being dropped off by a girl, he kisses her and walks into the house.

Tami tells Lip that they got a bill for $3600.00 after insurance, and they can’t pay it. Lip tells her they have the baby now, what are they going to do, come back and take him. Tami says they have to pay the bill, if they don’t it is like stealing.

Tami’s aunt is still out of the house, at breakfast the subject of Ian marrying Mickey comes up. Everyone notices how clean the house is.

Frank is still handcuffed by the bed by Faye, she has him in a diaper. She wants him to remember what he did to her poor Kyle. Frank says he doesn’t know, she takes a bottle of scotch and pours it on the floor in front of him. Frank still doesn’t remember.

Debbie wakes up, she is in a room with Claudia, she asks her to pick up her kid Julia from school; she is a terror, she tells Debbie to stay strong.

V got medical supplies for her new business with Kev, he says it is her best hustle idea ever. Kev has two women’s breasts painted on the truck, V tells him to get rid of that look.

Ian is in the room with Mickey, who is packing his things. Ian tries to talk about the other day, says he just needs more time to think about it. Mickey is moving out.

Faye asks Frank who he loves most in the entire world, he says his kids. She asks him again how he knows Kyle, Frank just can’t remember.

Lip comes out of a store and sees a woman upset that her card got stuck in an ATM machine. She goes inside the store to speak to someone and the money starts coming out when she leaves. Lip goes to give it back to her and a guy grabs it out of his hand.

V and Kevin are in their truck, painted on the outside is “Nurse V’s Jiffy Care.”

At home, Carl comes in with his cadets and tries to exert his dominance but nobody in the house will comply. Debbie walks in, Ian tells her not to marry her girlfriend, 50% of marriages end in divorce. Debbie asks if he loves Mickey, he says yes, she tells him to marry him and be happy. Liam needs a calculator, he steals a credit card from Tami’s aunt’s purse to buy it.

Lip is with Brad, he says Tami has him questioning his morality and says he is a bad role model for the kid. A client walks in, he has a job for twelve thousand, Brad won’t do it, but says Lip can do it for ten.

V and Kev encounter a snag in their new business, a woman walks up with her daughter, she wants an abortion.

Debbie is outside the private school and Julia finds her, she tells her that she thought she would be older, most of her mother’s hookers are.

Carl is with the cadets, drilling them and teaching them standard interrogation techniques, and enjoying every minute of it.

Mickey moves in with his new partner, who he spent one night with; he barks orders about how things are going to be with him.

V found a solution for the girl who needs the abortion, but it involves an insurance scam.

Faye is happy that Frank finally remembered Kyle, who got arrested in a drug bust with him when they were young – they thought Kyle was his dealer. She tells Frank that she needs him in an opioid comma, but not dead, so she can start making him pay for what he did to Kyle.

Ian goes ring shopping for Mickey, Liam uses the aunt’s card to pay for it.

Debbie is at Julia’s class, she tells Debbie she needs to do it with her, introduces her as her mom’s hooker and buys her shorts and a top.

V has her doctor’s friend give her a note pad of prescriptions to help her with her abortion problem. V enlists some older ladies to fill prescriptions for a rape drug, and pay their minimum co-pay to get them.

At home, Tami is changing Fred, Lip walks in with an envelope of cash to pay the medical bills. Tami is happy that he got the money legally from a job, rather than theft. Lip asks her if she ever stole anything in her life, she says a pair of earrings when she was young. Lip says that is worse, she stole it for fun, he stole food for necessity.

Debbie and Julia ended up skipping the class, they go share a meal instead. Julia leans across the table and kisses Debbie, who kisses her back.

Carl gets thrown out of his job with the cadets, he is transferred to the sanitation department because he is too tough on the cadets.

Faye has Frank passed out and in a wheelbarrow, she puts him in a car and plants several bottles of pills in the back of the car and the front with him.