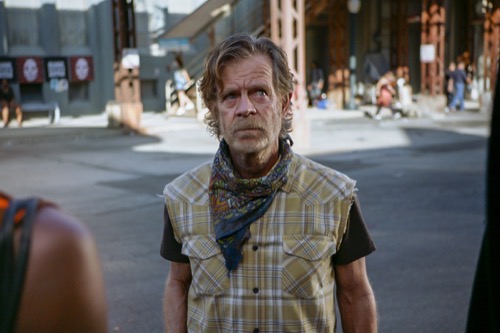 Tonight on Showtime the uniquely twisted and highly entertaining show Shameless returns with an all-new Sunday, December 13, 2020, season 11 episode 2 called, “Go Home, Gentrifier!,” and we have your weekly Shameless recap below. On tonight’s Shameless episode, as per the Showtime synopsis, “Debbie prepares a princess party for Franny. Mickey gets a real job. Frank helps Kev and V with their pot business. Lip runs into trouble with his new neighbors. Carl’s first day on the force is not what he thought it would be.”

Tonight’s Shameless season 11 episode 2 is going to be great, and you won’t want to miss it. So be sure to bookmark this page and tune in for our coverage of Shameless tonight between 9 PM – 10 PM ET! While you wait for our recap, make sure to check out all our Shameless spoilers, recap, news & more, right here!

Carl is running, it’s his first day on the job. Meanwhile, Franny wakes up, it is her birthday. She runs downstairs and looks surprised that there are no presents, Lip tells her that it is not like Christmas, she will get her presents later in the day.

Liam asks Lip why he slept there last night, he says they are doing work in the house. Debbie wakes up, she wishes Franny a happy birthday. Ian tells Debbie he is going to get his first paycheque and he will be able to contribute soon. Then he tells Mickey that if he doesn’t get a job he won’t get any more sex. Carl walks in and everything teases him about being dressed up for his new police job.

Tommy walks in the Alibi, far away from Kermit and Kev asks what is going on. V walks in and notices the same thing, Kev tells her that he thinks the two of them had a fight. Frank walks in, asks the two why they are sitting so far apart. V and Kev have no more brownies, their dispensaries cannot fulfill anymore. Frank tells them he can get them more, V says no way, she won’t go into business with Frank Gallagher. He tells her that he will find her weed and help her make the best edibles in the city. Kev tells her that Frank is an illegal drug connoisseur.

Carl is on day one, he gets in a car with his new partner. Meanwhile, Lip is walking Fred –
Mickey is at home watching TV, he sees a commercial about making something of himself, he gets upset and turns off the TV. Ian is at work, he is surprised at home much expired dry food his company throws out.

Carl’s partner tells him that he has been on the police force for fifteen years and he has never been shot, he doesn’t leave the car. Meanwhile, Frank is with V and Kev, they give him money to buy the weed and then he makes a deal with them for a three-way split.

Debbie is out shopping for Franny’s birthday. Lip calls Tami, he is in the house, two windows are broken, he is going to have to replace them. And, someone just dumped a bunch of trash in their front yard. She asks how Fred is and he realizes that he is outside, and he left Fred inside.

Mickey goes to Ian’s workplace and applies for a job. Ian sees him and tries to ignore him. The interview isn’t going to well, Mickey uses a lot of cuss words and then when he is told that the job might not be for him. Mickey gets up and tells the guy off, then he tells Ian and his co-worker off and storms out.

Carl and his partner get a call ad his partner ignores it, he tells them another squad car will be closer and they will take care of it.

Frank is home with V and Kev, he is making weed brownies; he teaches them how to make them so they taste better. Frank wants to double the price for the brownies.

At school, Liam is selling peanut butter sandwiches and gets caught by the lunch lady. He tells her that he is donating it, not selling it.

Carl gets the hang of what his partner is doing, he doesn’t respond to real crime but pretends there is a crime going on and takes longer for lunch. Meanwhile, Mikey steals a pickup truck. At the Alibi, Kev is really interested in finding out why Tommy and Kermit are sitting so far apart from each other. Clients arrive for Frank’s goodies. Lip is outside picking up the trash in his yard, his neighbor shows up, he asks her if she knows who made the mess, she says no.

Carl is with his partner Arthur at his mother’s house, they are having lunch. Afterwards, they leave and Arthur says he could really use a nap. Arthur keeps radioing the station and tells them one lie after the other to buy them time to do nothing.

Debbie is decorating the house for Franny’s princess party, Tami says she looks like she is enjoying this more than Franny will.

Mickey is stealing the container of thrown out products from Ian’s work, he is attaching the container to the pickup he stole. Mickey then tries to sell it, and he has success. Meanwhile, Ian is finished work, he opens his paycheque and notices there is a mistake, he worked 45 hours and they only paid him 39. He also got charges locker and other fees, and can’t believe he didn’t get a full paycheque.

Carl and his partner are back at the station, other officers want to go to a bar, Arthur says no, but Carl wants to go. Carl complains to Arthur about not doing nothing all day and tells him that he owes him a drink. They head over to the bar and Arthur goes wild, shocking Carl.

V counts the profits for the day, they made over three thousand dollars for the trio and everyone is thrilled. Frank tells them the trial run is over, the split is going to be 60/40, 60 for him. Frank then tells Kermit and Tommy that whatever is going on they need to kiss and makeup.

Time for Franny’s party, everyone is wearing crowns and singing the princess song to her. Mickey walks in and he gives her a gun that he bought her. Debbie is upset, Franny looks thrilled. Meanwhile, Arthur had a heart attack when he was making out with a girl in the washroom, in the stall beside Carl, where is was making out.

Tami, Lip and Fred are on their way home. They catch their neighbor Marcia, she and her friends are the ones who trashed their house. They don’t want the place to look good, their taxes will go up.

Kev and V are out and find the dealer who Frank bought the weed from. V tells her that Frank bought from her earlier, then Frank walks out. He says that he bought everything from her earlier and didn’t know that his partners would try to buy behind his back, so maybe the new deal will be 70/30.

Mickey is counting the money he made in selling the expired food, he tells Ian that he does things his way. The next day, Lip and Tami spray paint the from of the house to solve their problem.