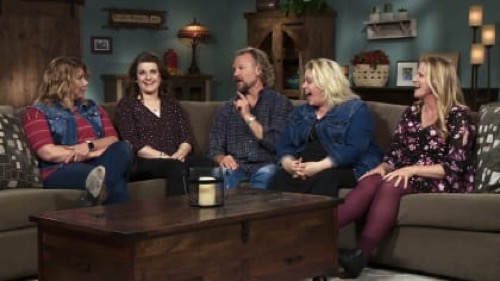 TLC’s reality show about a polygamist family Sister Wives returns tonight with an all-new Sunday, January 19, 2020, season 14 episode 4 called “Four Wives, One House?,” and we have your weekly Sister Wives recap below. On tonight’s Sister Wives season 14 episode 4 as per the TLC synopsis, “On Christmas Eve, Kody finally presents to his family his pitch for all four wives to live in one big house. Janelle actually likes the idea, but Christine is dead set against it. Merry Christmas!”

The houses in Vegas have been on the market for months. It probably didn’t help that the houses didn’t go on the market all at once and it also didn’t help that their listing agent is Janelle. Janella initially had to convince Kody to let her be the agent. He wanted her sole focus on moving out and he didn’t want her to be stuck in Vegas which was what ended up happening now that she’s the agent. Janelle has to travel back to Vegas constantly. She was there every other weekend and even when she wasn’t there she was still on the phone trying to sell the place. Janelle’s home life was now facing issues because she hadn’t sold the homes yet.

Kody said it was hard for him to split the listing agent from his wife. He loves his wife Janelle and he wants the best for her. He was just also a homeowner. The homeowner really needed to get these houses sold. He was now paying several mortgages and their family couldn’t afford to keep doing that forever. They were running the risk of going broke and if that happened, they might end up going back to Vegas for a while. Then there was the fact the holidays were coming up. The family was all over the place and they needed to find a way to feel like a family again. The kids haven’t all adjusted well and so Christine bought a puppy.

She was hoping the puppy would help her daughter, Gwendolyn. Gwendolyn had always wanted a puppy and she’s been depressed since they’ve moved. She just goes to her room on most days. She had needed a reason to come back outside and so the puppy was the perfect gift for her. Gwendolyn loved that puppy. Her sister Truley, however, doesn’t like puppies. She wanted a cat and so she broke down in tears when her mom brought home a pup. Christine later found Truley hiding in her room. She talked to her youngest daughter and she eventually convinced Truley that they’ll get a cat next.

Speaking of animals, Robin has always wanted to get a puppy. The only thing stopping her is Kody because Kody didn’t want to deal with pets and he only caved on the one for Gwendolyn because Gwendolyn was depressed. He wasn’t going to be doing that for anyone else. He also jokingly warned Robin against surprising him with a dog because he’s perfectly willing to hold a grudge. He said that last part less jokingly Kody and the family had needed a way to connect and the arriving holidays helped a lot. They broke up the Christmas holidays so that they spent time at each house and they were all together when Kody made his pitch.

Kody showed his family his dream of living in one house. He’s always wanted to do it because he would like to see his kids every day and it wouldn’t hurt if he saw his wives every day as well. Kody has blueprints for this house and he even has a 3D rendering of it. He showed it off to his family because he was just so happy to share it with them, but his wives weren’t feeling it. Christine didn’t want to live together again. She’s said that in the past and she wasn’t afraid to say it again now. She doesn’t want to live together. She was happier with the cul-de-sac and so it was hard for her to find something positive about the one-family-home.

Robin was the same. Robin tried to find something positive about the house and each time she looked at it – all she saw was the negative. She didn’t like the white walls because she thought the younger kids would ruin it. She didn’t like the part where Kody has his own space. She says that’s not what he signed up for and him having his own kitchen as well as living space was just too much for her. But then there was Janelle. Janelle didn’t mind living together again. She liked the idea and she was considering her children in all of this. Her daughter doesn’t get to see her sisters anymore because they’re all different age groups and so living together sounded great to her.

Meri was the only one that was too hesitant to have an opinion. She tried to ask questions and Kody wasn’t ready for them. Kody was doing his best to sell this house to his family, but at the same time, he was also debating himself over it. Like he himself wasn’t too sure of living together again. Kody then went on a hypothetical about taking a break from the family and so he didn’t know what he wanted. And his wives let him keep talking because they knew he’d talk himself out of the one home.

And funnily enough, the kids were split on the idea. Some liked the big house and others just knew it wouldn’t work.