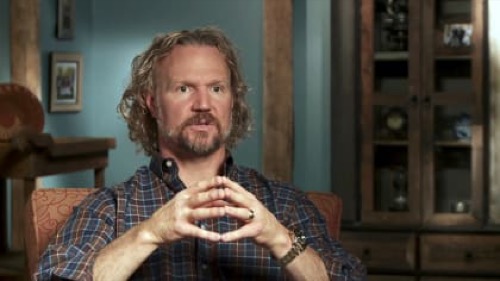 There’s a big surprise when a pregnancy is revealed. Later the family confronts the fact that their houses in Vegas are not selling. Their finances are at a breaking point.”

Tonight on sister wives, it’s Christmas Eve and everyone gathers at Meri home as a traditional function all together 18kids and one grandchild. Kody presents his plan for his big house to have everyone living under one roof. Robyn feels as if it’s not the right time to discuss the house she just wants to get through Christmas. Kody continues to hope that once the house is built it’ll have the kids come back closer to home.

He proceeds to pull the blueprints out on the table which upsets Robyn and Christine because they both feel like it’s messing up Christmas and they choose to not engage in the conversation Kody wants to have about the house.

Janelle on the other hand with some of the other children looks at them and she actually likes the idea of building the house so does one of the kids Aurora she likes the idea. Robyn opens up and says living under one roof may not be something she wants, Meri avoids saying her input until everyone else has and chooses not to say anything on the topic fearing that majority rules so if her views are different it wouldn’t matter. Christine says she doesn’t want to live with others due to her not being freely intimate with Kodu due to the other wives being around. She wants to be able to show a display of affection.

It’s Christmas day and there are tons of presents under the tree for the kids to open. Kody gives a speech right before gifts are open thanking everyone for being there.

Kody gives the ok for everyone to open their gifts. Kody admits he had issues with Christmas due to the financial stresses of having to buy all those gifts for the kids and how he had to eventually overcome it because he wanted to give his kids good memories.

Maddie delivers the news that she’s expecting another child and everyone is excited. Janelle decides to speak about the homes in Vegas that’s up for sale, there are potential buyers but no one is making an offer. Janelle’s and Christine’s homes are up for sale she decides to drop the price on the homes by $40,000 Christine is very upset the homes aren’t selling and she has two payments to be made on homes. Christine feels she and Janelle should have a private conversation about what to do but since she’s a sister wife it’s out in the open.

Robyn feels upset that Janelle and Kody are making the decay to drop the price on their own and not collectively as a team with everyone’s input, she feels the money used from the homes will be just used to pay for the home in coyote pass that Kody wants to build. Robyn seems to be the most vocal and upset about the decision she feels Kody made it seem that it was Janelle asking to drop the price and not him she’s very mad.

Kody tries to plead his case saying when the homes went up for sale initially he thought the market was good but now things are different and he just wants to cut the losses and be done with selling the homes. Kody continues with the conversation with meri who feels he’s making the decision based on fear, Jody just wants the homes to sell so he doesn’t have to move back there. Kody really wants to move to Utah but due to legislation issues he doesn’t and his wives don’t feel safe moving there either.