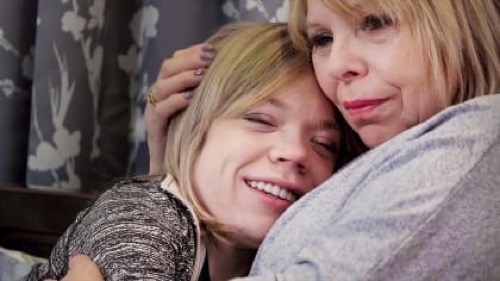 Tonight the TLC  series a fresh twist on family sMothered airs with an all-new Sunday, May 31, 2020, season 2 episode 2 and we have your sMothered recap below. In tonight’s sMothered season 2 episode 2 titled, “If Mom Can Do It, I Can Too” as per the TLC synopsis, “Dawn and Cher tell Jared about the new natural birth plan of Cher. Mary takes Brittani to get a colonic.”

Mary, 55, and Brittani,19 are heading to the pool. Brittani just graduated from the correctional academy, and her mother is going to throw a party for her. She tells her mother that maybe she should lose weight before she wears the dress she bought. During her high school years, she was always overweight, she lost 85 pounds and wants a tummy tuck to help her feel better about herself. Her mother always felt, if it is going to make you feel better, you should just do it. Her mother suggests a colon cleanse, Brittani doesn’t like the sound of it but agrees to do it. Mary is thrilled.

New York, NY. Dawn, 59, and Cher, 29. They are closer than close. They dress alike and her mother has made her a mini-me. Cher is eight month’s pregnant, she is having a girl, and her mom is excited to dress them like triplets. Jared doesn’t really mind that Dawn and Cher are close, but during the pregnancy, Dawn really gets involved to the point that he talks Cher into having a natural birth. Dawn is nervous for Jared to find out. The time has come, Cher tells Jared that she wants to do a natural birth, he says that is interesting.

Part of their birth plan was that Cher didn’t want to go with the pain and he is concerned that she is being talked into this. Dawn admits that she suggested it, but Cher is the one that looked into it. Jared doesn’t agree, but he tells Cher that he will support her no matter what. Jared is such a nice guy, he is going to let this one go, but warns, when the baby is out, he will stand his guard on issues.

Kathy, 61, and Christine, 35. Christine tells her mom that she doesn’t think that Carlo is too keen on moving into her apartment. They ambush Carlo at the gym, she tells him that they should move into her house. Carlo doesn’t know why they are there, he already told Christine his decision, he is not staying at Kathy’s house for months. Kimmy cannot believe that they showed up there, this is his place and his time. Carlo goes to walk away from them, Kathy says she is going to take it as a yes. Carlo shoos the two of them out, and in his final words, he says he is not moving in.

Briarcliff Manor, NY. Marcia, 68, and Alena, 21. Pearl shows up at the house for her enzyme therapy. Pearl says the two have a special bond, Marcia takes excellent care of her daughter, she gets whatever she needs and wants. Marcia thinks she is really involved in her daughter’s life and maybe more extreme because of her daughter’s medical condition. Marcia is in college, she says when she is home, she wants to spend all her time with her mom. Pearl asks her if she has a boyfriend now, she says no, they just want to sleep with you.

Alena talks about being bullied, her mother is always the one that she has trusted, she has always had her best interest at heart. They talk about her voice, Alena says singing is her life, and she just wants her voice back. Her mother tells her that if she can’t sing the way she used to, then she will sing another way.

Sunhe, 52, and Angelica, 32. Today is the day that Jason and Viviana are signing the divorce papers, Angelica is a little irritated that her mother invited them to be there. This is the first time that Angelica is meeting Jason’s soon to be ex-wife. Jason tells Angelica that Viviana called him, she had a cold feet. They were married for about seven years, and over time, they felt they were not compatible. Viviana didn’t know that Sunhe and Angelica were going to be there. Angelica asks if she is coming or not, he says he thinks she is coming.

Mary and Brittani are getting a colon cleanse together. Mary has had one before, but this will be Brittani’s first time. Brittani looks really nervous, so Mary volunteers to go first. Mary is squeezing her hand so hard that she tells her she is hurting her. It’s Brittani’s turn, Mary helps her to get positioned. Brittani says she looks forward to seeing her friends from middle-school and high-school. Mary brinks up Zach, Brittani tells her that he told her that he just wants to be friends with benefits with her. Brittani admits that she has had problems with her self-esteem her whole life and hopes at her graduation party, Zach changes his mind.

Sunhe, Angelica, and Jason are still in the office waiting for Viviana, and she shows up. Viviana says right away that she thought it was just going to be the two of them. She is shocked to see Angelica and her mom at the meeting. Jason is her family, even though they are separated. The notary should be there soon. Vivian tells Jason that doing this is breaking her heart, but she hopes the two of them will be happy.

Viviana mentions that he should change the joint account too, Sunhe says that she is surprised since they have been separated for almost five years that would still have an account together. Sunhe notices the ring on Viviana’s finger, asks if it is her wedding ring, she says no – the one Jason gave her was silver. Sunhe thinks that Viviana doesn’t want to let go. The notary arrives. Sunhe asks Viviana if she still loves Jason, she says yes.