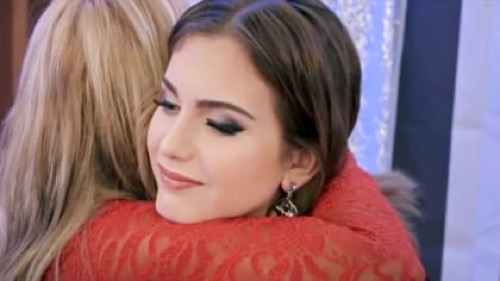 Tonight the TLC  series a fresh twist on family sMothered airs with an all-new Sunday, June 14, 2020, season 2 episode 4 and we have your sMothered recap below. In tonight’s sMothered season 2 episode 4 titled, “My Gift To You” as per the TLC synopsis, “Cher and Dawn are officially triplets, now that Baby Belle is in the world.

Cher finally made it to the hospital, she has been in labor for fifteen hours, Dawn is with her. When they arrive at the hospital they tell her it is going to be another 5 hours, Cher asks for the epidural. Three hours later, she gives birth. Jared is happy that she had an epidural, his friend who was doing the epidural kicks Dawn out of the room. Cher and Jared are over the moon, the baby looks exactly like Jared.

Cher tells her mother that it makes her appreciate her even more now. Afterward, Jared laughs about kicking Dawn out of the room. The baby’s name is Belle May. Dawn just loves holding Belle May and giving Cher tips and she wants to stay in New York as long as she can. Jared is shocked, those things are not going to happen for months and he is not too sure about having Dawn around that long.

Brittani asks Mary for help with her dress, her mom tells her that she looks beautiful. Brittani says that she is nervous but excited. She really likes Zack and hopes he comes to the party. At the party, Brittani sees a whole table filled with people she hasn’t seen in a long time. Mary’s husband Frank is there, he is trying, but Brittani has a wall up when it comes to him. Mary is pressuring Brittani about Zach, she wants her to text him to see if he is coming, but Brittani doesn’t want to. Mary is obsessed with Zach showing up and she will do whatever she can to get him there for Brittani. It turns out that Zachary blocked Brittani on his cell phone, Mary gets her friend Dawn to text him and she is not blocked.

Mary tells Brittani that she was blocked. Mary says she better never see him on the street. Mary is upset that Zachary hurt her baby. Mary asks everyone for their attention, she makes an announcement for Brittani, who graduated from the police academy, she worked very hard for this. She goes on to say she means so much to her, and she loves her for the happiness that she brought into her life. She then tells everyone that she lost 100 pounds and wants a tummy tuck, and she is going to pay for it. That is her gift to her.

Anastasia and Chris can’t believe that Mary did that, it is embarrassing. Dawn is not surprised, she knows Mary. Brittani tells her mom that she is her soul mate. Brittani is thrilled about her tummy tuck. Frank doesn’t think the gift is appropriate, it is a bit extreme. Frank asks Mary why she didn’t share this with him, he feels left out and a little hurt. On the other hand, Brittani doesn’t trust Frank and thinks he always gets in the way between her and her mother.

Sarah and Laurie are at dinner with Miguel for date night. Sarah thanks Miguel for allowing her to be included, he says he can’t say no. Sarah starts putting a little pressure on the couple for not getting engaged before buying a house. Laurie would like to be engaged, just to make her mom happy. Miguel says it will happen when it happens. The food arrives at the right time. Sarah thinks Miguel needs a kick in the butt. Sarah tells Miguel that she is looking at dialysis and prays every day that she doesn’t have to. Sarah says she brings up the engagement because she wants to be a part of it. Miguel understands the seriousness, but he doesn’t want to be pushed into anything. And, in the end, he doesn’t need a piece of paper to tell him that he is eternally bound to Laurie. Sarah thinks Miguel’s number one priority is himself, and she is not sure if he is the right guy.

Alena turned 21, Marcia says there a lot of things she does for her that she should be doing on her own. Marcia brings her to go-karting to see how she feel about driving. Alena is a very cautious driver and Marcia tells her that with how slow she drives, she would never kill anyone. Marcia wants Alena to be more independent, and be able to drive herself someday. They stop for a drink and some fries, Alena tells her mom that she is nervous going on the highway and feels like she would have a heart attack. Marcia says that is normal, but she won’t be around forever and she needs to learn how to take care of herself. Alena doesn’t want to learn to drive because she doesn’t want to detach from her mom.

Dawn is at Cher and Jared’s house, he looks annoyed. Mason is there as well, he throws off some compliments. Dawn tells Cher that she wished that she lived closer. Jared doesn’t help the situation, he tells Dawn that the baby will probably look completely different when she comes back. Cher looks up to her mother. Cher says breastfeeding is sore, Dawn says she can now appreciate her. Jared thinks they should call in a professional for advice, they don’t always need to take Dawn’s advice. Dawn and Mason go to the store. Jared asks Cher if they really need her mother to stay longer. If it were up to Cher, she would keep her mom around, but she understands how Jared feels. She honestly feels like she is in the middle.

Laurie is not worried that her mother comes on too strong with Miguel, but she will have to listen to it afterward. On the way home, he is super pissed with her. In their bedroom, he tells her that he is annoyed. His mother keeps hitting him with the same old questions, it feels like a fire drill. Laurie calls her mom to say goodnight. When her mom is on the phone, it gets really annoying for Miguel.