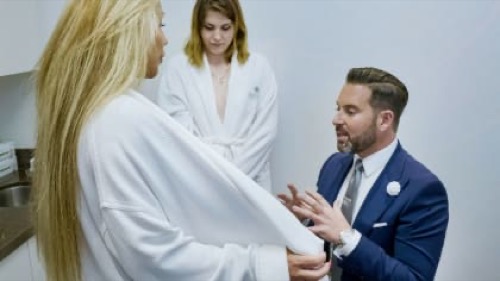 Tonight the TLC  series a fresh twist on family sMothered airs with an all-new Sunday, July 5, 2020, season 2 episode 7 and we have your sMothered recap below. In tonight’s sMothered season 2 episode 7 titled, “The Secret Is Out” as per the TLC synopsis, “Kathy wants Cristina’s new kitchen to match hers.

Sarah and Laurie have a scare at Wienerfest. Cher and Jared worry Dawn is overstaying her welcome. After going on a date, Brittani reveals a secret to Mary.”

Brittani meets her mother outside for morning coffee. Mary is still trying to digest that Brittani told her she is bi-sexual. The two are going to the plastic surgeon later that day to talk about Brittani’s procedure, and Mary wants to do something so they can have surgery at the same time. Brittani tells her mom that she is excited about the appointment. Brittani is afraid to have surgery but so happy that her mom is going to have it with her.

Dawn dressed baby Belle to match her, Cher hasn’t told her that it is time to go because Jarod wants her to leave. Dawn tries to encourage the two to go out for dinner, she will watch Belle, but they don’t want to, they want to spend the time with Belle. Cher finally tells Dawn they need to have their time, just the three of them. Dawn asks what she means. Cher tells her that she should leave with her daddy, to give them quality time with their daughter. Dawn says she was just trying to help. Cher tells her that she is nothing but amazing, they just need this time for their family. Jarod says they don’t need a break right now from Belle, Dawn says ok. Cher tells her to come back soon. Dawn is hurt, she thinks this is coming more from Jarod than Cher. She always felt like things would change after Belle was born, and now they are.

Christina and Kathy are getting bikini waxes together. Christina asks if they can get is done together, like a couple’s massage. Christina asks Kathy what is wrong with Carly. Kathy says she thinks she is upset that she moved in and that she doesn’t have a boyfriend.

Angelica asks Sunhe what she is thinking about, she is kind of quiet. Sunhe says she is nervous about the lump on her breast. Two years ago her doctor said not to worry about it unless it got bigger, and it has. Sunhe is worried that it is cancer, she is frustrated and scared, she is not ready to leave this world and wonders if Angelica will be taken care of.

Mary thinks that having plastic surgery together will build a whole new world of ways of spending time together and make memories. Brittani is worried that when Frank finds out that her mom is having surgery the same day as her, it might be too much for her. The doctor comes in, Mary tells him that she needs a tummy tuck for her daughter after her eighty five-pound weight loss. And, she would like, at the same time, to have her breasts enlarged, she want them even fuller. Mary has already had four operations. She says she wants fullness and get rid of the droopiness. The mother and daughter hold hands, the doctor has honestly never seen a mother and daughter like this before. The doctor leaves, Brittani tells her mom that she is excited, she wants to be beautiful like her.

Sarah cannot reach her mom Laurie for a few hours, she is getting worried. Sarah is really worried, when she can’t find her it is almost like she blacks out, she can’t think of anything else. Miguel tries to calm her down and reassures that everything is fine. Sarah wants to go see if she is ok, it is an hour drive.

Brittani and Mary meet Frank for lunch, Mary is very excited about her plastic surgery together. Frank asks him how everything went, Brittani says she is looking forward to it, she wants to look like a twenty-something year old that is sexy. Mary tells Frank that the doctor looked at her breasts, and she has to have surgery as well. Frank is worried about the money, and he asks Mary who is going to take care of them, Mary says to him. Frank thinks Mary is going to make him pay for his indiscretions his whole life, and he has his limits.

Sarah arrives at Laurie’s house, when she opens the back door, the dog’s bark and she finds her mom sleeping on the couch. Laurie feels horrible and guilty at the level that Sarah worries about her, she just wants her to live her own life.

Angelica is with her mom Sunhe while she gets another test on the tumor in her breast. Sunhe is very worried that it could be cancer and says she is not ready to go, she might never be ready to go.