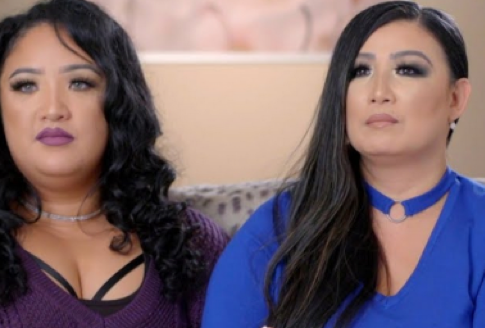 Tonight the TLC  series a fresh twist on family sMothered airs with an all-new Sunday, August 2, 2020, season 2 episode 11 and we have your sMothered recap below. In tonight’s sMothered season 2 episode 11 titled, “Smothered Knows Best as per the TLC synopsis, “Join your favorite mother-daughter duos from sMothered as they share exactly what’s on their mind while watching the most-outrageous moments of the series. From shared bathwater to a “couple’s” bikini wax, find out whose antics get the biggest reactions.”

Cher and Jared’s apartment, Cher is with her mother watching the show. At Kathy and Christina’s, they are together. Laurie and Sarah are sitting with the dogs. Sandra and Mariah are sitting together, they are from a previous season. Marcia and Alena give kisses before they get comfy. Sunhe and Angelia have a tray of food and sit on the bed to watch the show.

Brittani says that if she moved away Mary would have a breakdown. We see the two of them having a shower together, Mary says it is the best way to start their day. Most of the other mothers/daughters are shocked. Christina says she loves her mom, but she doesn’t want to see her naked. Sunhe and Angelica admit they use to shower together, but now they just share their bathwater. Again, most mothers/Daughters are shocked.

Marcia surprised her 21-year-old daughter on her birthday with lip injections. Her lips end up being super swollen, and they were planning on going out for her birthday.

We see Marcia licking her daughter awake in the morning. Alena loves it, it makes her feel close to her mother. Then they play chase, Marcia says some people don’t agree. Christina thinks it is kind of cute.

We see when Cher told her mother she was going to have a baby. All the other mom’s and daughters love the moment until Cher gives her mom the urine stick that gave her the positive results and her mom kisses it, which grosses out everyone.

Kathy and Christina are in the car, Christina tells her that she looks like Richard Simmons in her outfit. They end up at the gym to see Carlo. The first thing Carlo asks is what Kathy is wearing. Sunhe is sitting with Jason now and she tells him that he could lose a few pounds, he says we can. Jason loves the way Carlo tells Kathy and Christina to leave the gym, he tells Sunhe that Carlo is his idol.

We look at the episode when Miguel was at dinner with Laurie & Sarah. Miguel asks if three and a half years are enough to get to know someone, Kathy and Christina say yes. Miguel says he won’t be pressured into asking Sarah to marry him, the rest of the mothers/daughters think she should dump him.

Sunhe says that she wants to find a man like her daughter, and if she had her choice, she would always be with her. Her dream is for her daughter to realize that Jason is no good for her. Laurie thinks Sunhe is way too controlling.

Mariah is getting ready for her party, her lips are swollen but she can still talk. They go to a male strip club, Mariah’s mom is there, her friends find it kind of weird. Kathy says she likes that Sandra wants to stay young. Mariah is called to the stage, a crown put on her head, her mother looks like she is having more fun than her daughter. Afterward, Mariah gets upset that her mom had her called up on stage.

Next, Cher and Dawn are at the Lamaze class behind Jared’s back. The other mother/daughters find it strange that Dawn is acting as the husband in the class.

Marcia and Alena are cooking, Marcia sets off the fire alarm with the pan on the fire. Marcia feeds Alena by doing little airplanes with the fork. Cher says Alena is twenty-one and she needs to grow up.

We see Cher in labor, Dawn is massaging her back. They are planning on walking to the hospital. They leave the house with several duffle bags, people are wondering if they are going to the hospital or camping.

Kathy and Christina go for Brazilian waxes together, Cher and Dawn don’t see a problem with it because they have done it together as well. Sunhe and Angelica think it is a bit much. Brittani tells her mom that she wants to do permanent hair removal all over her body, Mary says she should just do the runway.

Sunhe and Angelica are in the car, it is late at night. They arrive at Jason’s place, he is dressed in a suit and in the backyard, he gets down on one knee and gives Angelica a ring. There are red and white balloons, rose petals. A perfectly romantic event, but with her mother beside her. Angelica takes the ring and hugs Jason, Sunhe looks disgusted Jason has something to Sunhe as well, it is a key to his house. He wants her to move in, along with Angelica. Sunhe says she cannot accept the key and doesn’t think her daughter should accept the ring, it looks like an engagement ring. Jason says it is not an engagement ring, it is a promise ring. Angelica gives the ring back. Mary can’t believe it, she says it is so stupid and Sunhe is selfish.