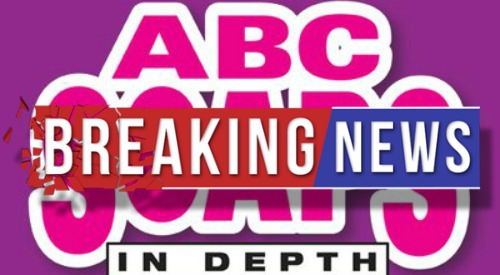 There’s some bad news to report involving the print edition of Soaps In Depth. The biweekly magazine has folded and will release its final issue on May 4. Since the mag had already been struggling, the COVID-19 aka coronavirus crisis couldn’t have come at a worse time. That naturally had an impact on this decision, which Executive Editor Richard Simms talked about in a heartfelt Twitter message.

Unfortunately, this all happened swiftly and didn’t allow much time for a true goodbye. That’s why Simms wanted to reach out to fans and let them know what was going on. Since Soaps In Depth’s main Twitter accounts will still be used for their online offerings, Simms used his personal account to explain.

“You’ve probably heard by now that Soaps In Depth magazine has folded,” Simms tweeted. “Our last issue will publish on May 4. The news came down suddenly, so we didn’t really have an opportunity to say a proper farewell. I’d like to take a moment to do that now.”

Simms went on to talk about how much this job meant to him. He has immense gratitude for the fans who read the Soaps In Depth print edition and kept it alive for as long as possible. It’s unfortunate that it’s not possible anymore. “Sadly, the crisis our country is currently faced combined to deal a pretty severe blow…But to paraphrase Sonny Corinthos, ‘It was a wild ride,’” Simms insisted.

Soaps In Depth Editor in Chief Dawn Owens also shared some poignant words in a statement. “At our hearts, we are all fans of the genre,” Owens said. “We laughed, cried, and sometimes screamed right along with you at what was happening on our beloved soaps. So as the magazines publish their final print issues, on newsstands 4/27 and 5/4, we choose to do it not with tears but with gratitude…”

Many fans enjoyed their coverage of General Hospital, The Young and the Restless and The Bold and the Beautiful. Days of Our Lives was also included in Soaps In Depth’s coverage despite the NBC version being discontinued.

It didn’t take long for soap fans to react to this huge news. One Twitter user said, “So sorry to hear this. Thanks for all the fun over the years!” “Oh no!! I loved this magazine!!” another fan tweeted. “Really sad to hear this,” said one more disappointed reader. “Thank you to all the incredible people who supported the genre, the shows and the fans.”

These updates are disappointing for Soaps In Depth lovers, but we all wish their employees the best of luck on future endeavors! Stick with CDL for the latest soap spoilers, updates and news posts.

A message from Soaps In Depth Editor in Chief Dawn Owens: pic.twitter.com/JJMaXCTAw3

The last issues will be coming out over the next two weeks. The final issue will come out on May 4 (an ABC issue). And thank you, from all of us, for the support! https://t.co/Zfl9PMmF5z