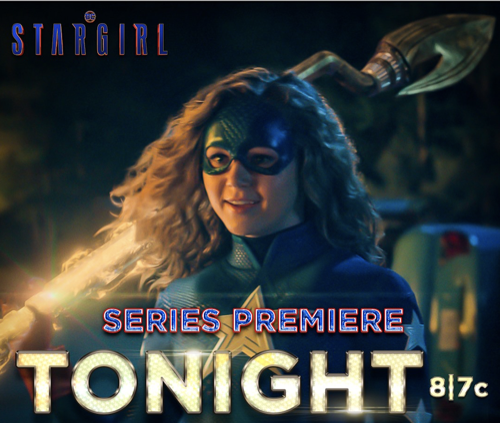 Tonight on the CW their new series Stargirl premieres with an all-new Monday, May 19, 2020, season 1 episode 1 premiere and we have your Stargirl recap below. In tonight’s episode called, “Pilot,”  season 1 episode 1 as per the CW synopsis, “When Courtney’s seemingly perfect life in Los Angeles gets upended with a move to Blue Valley, Nebraska with her mother Barbara, stepfather Pat and stepbrother Mike, she finds herself struggling to adapt to her new town and high school.

But when Courtney discovers that Pat is harboring a major secret about his past, she ultimately becomes the unlikely inspiration for a new generation of superheroes.”

Pat rushes to arrive at a mansion to find Wildcat, Hourman, and the others fighting a group of enemies. Starman ends up impaled. Pat tries to pull the object out of his stomach. The two take off. The enemy chases after them but they fly away. Moments later they crash. Pat pulls Starman from the car. He tells Pat the Justice Society must live on. He is going to die. He tells Pat, it cannot be him to carry the torch but someone brave and heroic.

Ten Years Later – Courtney packs her things. She hugs her friend. She is moving to Nebraska with her step-dad. Pat pulls in with his son Mike. Courtney comes out with a box. Pat tries to help her. She doesn’t want help.

Hours later after traveling, the family arrives at their new house. They head into town to eat. Everyone is friendly. Courtney isn’t happy. Later that night she unpacks and looks out at the stars.

The next day, Pat drops Courtney off at her first day at her new school. She isn’t happy when she learns they do not have gymnastics.

Pat is opening his garage when a local who calls himself Crusher comes to visit. He owns the gym down the street. He invites Pat to come to visit his gym. Meanwhile, Courtney’s mom settles in at work on her new job.

At lunch, Courtney sits at the table for “singles.” A jock comes by and teases a girl, calling her a slut. Courtney defends her. He takes Courtney’s phone. She gets up and grabs for it, pushing him into a lunch lady. She is brought to the office.

At home that night, Mike talks about his awesome day. Courtney is in a mood. Pat tries to cheer her up. She tells him he isn’t her dad. She heads to the cellar to be alone. She finds a box of Pat’s with a photo. Behind it is a picture of the Justice Society. She starts to dig around, finding more photos of Starman and the others. She finds a staff that lights up. She holds it. She can feel its power.

The. Staff carries her out the front door and into town. In the park, she flips and uses it as a curl bar. It. Takes her into the sky, helping her fly. Meanwhile, Pat. Is in the cellar and realizes the staff is gone. Courtney plummets to the ground and comes out of the woods at a drive-in theater. She. Sees the jock bullying another car and uses the staff to let the air of his tires. He sees her and heads to attack her but the staff keeps her safe, helping her to dodge him. She takes off after his car catches on fire.

Courtney arrives home to see Pat. He sees her with the staff. He tells her to give it to him. She wants to know what is going on. He explains it is a cosmic staff. It belongs to Starman. He tells her about the JSA. He hasn’t told her mom because its too dangerous. Courtney shows him her locket with a picture of her dad. The staff worked for her. What if her dad was Starman? Pat tries to talk to her. She doesn’t believe him. She thinks her dad may have been Starman. She heads to tell her mother who tells her that her father only came around once a year.

The jock tells his dad about the person and the staff. He is very interested and wants all the details he has. He sends his son to his room and hits a button on a shelf in his study where he has a leather suit hiding behind a wall.

Later, Pat and Courtney sit and talk. He tells her about how he was called Stripsey. He was Starman’s sidekick. It was an honor. She agrees to keep his secret because he makes her mother happy.

Courtney wakes in her bed to the staff. It has come to her, flying in the air. Her mom comes in. She manages to hide it. They have a quick heart to heart. Courtney shews her mother off. The staff takes her back into town. Meanwhile, the jock’s father is at the drive-ins. Courtney practices with the staff on a rooftop. The staff takes her flying through the air. She runs into someone in the sky and is set to the ground, falling into a junkyard.

The staff brings her into a warehouse where she is confronted her the jock’s father. He wants to know who she is and how she got the staff. They battle. She manages to escape and runs right into Pat who is controlling a 20-foot high bot.