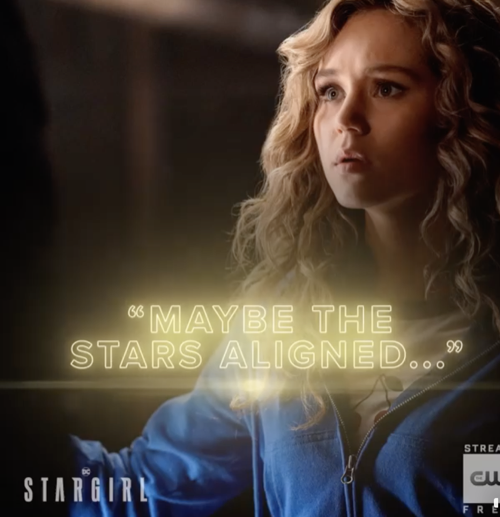 Tonight on the CW their new series Stargirl premieres with an all-new Monday, May 26, 2020, season 1 episode 2 and we have your Stargirl recap below. In tonight’s episode called, “S.T.R.I.P.E,”  season 1 episode 2 as per the CW synopsis, “After Courtney has an unexpected run-in with a member of the Injustice Society of America, Pat reveals the truth to her about their history.

Meanwhile, Barbara is elated when she sees Courtney making an attempt to get along with Pat, not knowing the secret they’ve been keeping. Finally, things take a dangerous turn at Blue Valley High’s open house night when Courtney becomes the target of a dangerous foe.”

After meeting Pat out in the field in his robot creation, he rockets into the sky with Courtney on his shoulder to bring her somewhere safe. The villain who was chasing her sees them in the sky. He holds her high school ID in his hand.

Moments later, Pat and Courtney arrive at his garage. She is shaken and bleeding from the top of her head. They talk about the villain who attacked her. Pat tells her it was Brain Wave. Courtney asks if he killed her father Starman. He tells her Starman is not her father. She wants the whole truth about Brain Wave. He is part of the Injustice Society, Pat tells her. He thought he was gone for good along with the others. Courtney wants them to take him down. They are going to need masks. Pat tells her no. He also plans to take away the staff. She tells him she won’t sit on the sidelines like him.

The next day, Pat takes his robot out of the filed and tries to test him out. It doesn’t go well. Returning back to the garage, he makes some adjustments and tries again.

At breakfast, Barbara notices that Pat and Courtney both have injuries. They both say they fell down the basement stairs. Barbara heads to work. Courtney heads to the basement and finds a costume. Meanwhile, Henry, the jock who Courtney fought, is questioned about the other night at the drive-ins. His dad [Brain Wave] asks if he was attacked by a girl. Henry tells him it was a guy but his dad knows better. His dad then tells him to look him in the eyes and read his thoughts. Henry can’t. It appears maybe he doesn’t have any powers.

At school, Courtney works in the home economics room in her new costume. Pat heads to Crusher’s gym. He wants to work out. Crusher gets a little crazy with excitement.

At lunch, Courtney sits at the singles table. One of the female student’s video chats with her parents. Thee girl’s mother works with Brain Wave who is a doctor. That night, they all head to the school’s open house. Brain Wave is there and he is searching for Courtney. Pat and Courtney are also searching for him.

Courtney finally spots him and he also spots her. She walks away fast looking for Pat. He corners her in a hall. He tells her she must be Starman’s daughter. He wants her to bring the cosmic staff to him. He threatens to hurt her mom if she doesn’t. She has until midnight.

Courtney runs to tell Pat. He runs to tell Barbara he isn’t feeling so well. They need to head home. Back at home, Courtney tells Pat she has to face. Brain Wave. He tells her she cannot go. He is going. If he isn’t home by morning she needs to leave Blue Valley with her mom and Mike.

Pat goes to his garage. He gets his robot ready. At home, Barbara tells Courtney how proud she is of her for getting along with Pat.

Pat arrives face to face with Brain Wave in a parking lot. Pat tries to fight him but he is too powerful. Courtney has second thoughts and arrives just in time. She fights Brain Wave. She overpowers him several times but he manages to take her down for a minute. Pat comes to her rescue and she manages to grab her staff. She takes him down.

Later, Henry visits his dad in the hospital. He is unconscious. Back at home, Pat and Courtney talk about Brain Wave and the JSA. He cannot believe there is another Stargirl. Pat doesn’t know about all of this. Courtney does. They are a. team. She renames his STRIPE.

A member of the Injustice Society visits a beast he has locked away at the society’s headquarters. They discuss how Brain Wave has been taken out. They plan to kill whoever did it.