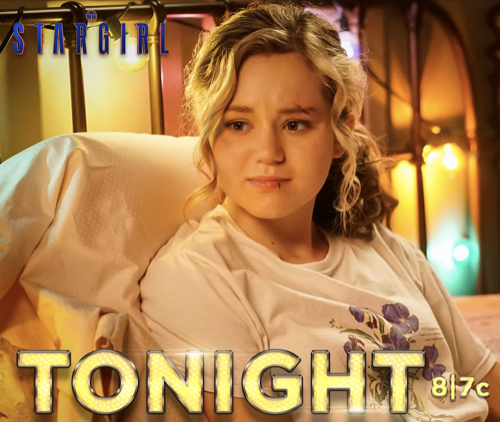 Tonight on the CW their new series Stargirl airs with an all-new Tuesday, July 7, 2020, season 1 episode 8 and we have your Stargirl recap below. In tonight’s episode called, “Shiv Part Two,” season 1 episode 8 as per the CW synopsis, “After Courtney gets herself into trouble following an unexpected confrontation, Pat decides they need to come clean to Barbara; Cindy takes heat from her father after a plan to take matters into her own hands goes awry.”

Traveling for business, Jordan and Barbara sit for dinner and talk about their success with a sale. Jordan heads out to see a friend. Pat calls Barbara. He tells her that there has been an accident. Later, Courtney comes to in the hospital. He tells the Court about her mom. He had to tell her about the accident but he said it was a car accident. To cover his tracks he actually drove his Buick into a light post. They talk about Cindy. Pat thinks she is the daughter of an ISA member. He thinks they need to tell Barbara. Courtney begs him not to. Not yet.

Cindy tells her dad she found Stargirl. He knows all about their battle but it isn’t good enough. Stargirl is still alive and knows he has to tell the others.

Rick tells Yolanda and Beth they need to go and take Cindy out. He is angry. They talk him into waiting and not flying off the handle. They have a plan.

On the way out of the hospital, Courtney sees Henry. He shuts the door in her face. At home, Mikey is being extra nice. He tells her he is sorry for telling her to back off of Pat. He was just jealous he has never had to share his dad. Now he is just happy she is his sister.

Pat heads to the basement and takes out Courtney’s staff. He talks to the staff about how young Courtney is. He asks the staff to protect her. The staff does nothing until Pat leaves the room thinking he is a little crazy for talking to the staff. Barbara comes home. They talk about Courtney. After he wants to tell her the truth but she is too tired.

Jordan pays a visit to a man who is working against his agenda. He freezes him to death. Meanwhile, Henry is at home hearing high pitched noises and ringing. Grabbing for medication, he manages to control the pill with his mind.

Pat finds Yolanda and Rick watching Cindy’s house. Beth is ringing the door. Pat runs to stop her but it is too late, Cindy’s mom answers the door. Pat pretends to be Beth’s adoptive father. The mother invites them in. Beth goes in with a smile while Pat hesitates.

Cindy pays Courtney a visit at home. She brings balloons. Courtney is scared but lets Cindy do all of the talking. Cindy tells her she is sorry for her bad attitude. She had a bad day yesterday. Courtney cannot tell if Cindy knows she is Stargirl or not.

At Cindy’s, Beth uses her goggles to get clues. Pat just wants to get out of there but Beth stalls. Chuck cannot tell her anything about the family or the home.

Cindy sits and eats chocolates on Courtney’s bed as Courtney looks uncomfortable. Back at Cindy’s, Beth heads down into the basement after pretending she needs to use the bathroom. She tries to talk to Chuck and the others but they cannot hear her.

Cindy tells Courtney it is time for her to go. She says goodbye to Courtney, calling her Stargirl. She isn’t going to tell her dad just yet. She doesn’t want to be sidelined. She threatens to kill Yolanda, Rick, and Beth. Meanwhile, Beth is going through Cindy’s room. Courtney messages the others that Cindy knows who they all are. Rick and Yolanda get Beth out just in time. Pat runs for it too when Cindy’s mom hits on him.

Pat meets with the others outside. He gets them out of there after Beth shows him a photo of Cindy’s father, a war criminal and former scientist who was killed in 1947.

Stargirl tries to get her staff but it isn’t cooperating. Meanwhile, Henry is practicing his newfound talents. He finds a key that leads to a door. Inside, he finds a suit, tapes, and a letter about how he and Cindy were paired so she could watch over him.

Stargirl comes blasting through Cindy’s bedroom window looking for the others. They fight, making their way out and into the street where they see Henry. Henry reads both their minds and freaks out, feeling torn. It sends Stargirl and Cindy in opposite directions. Cindy is then taken by her father’s associates, leaving Henry in the street confused. He runs from Stargirl.