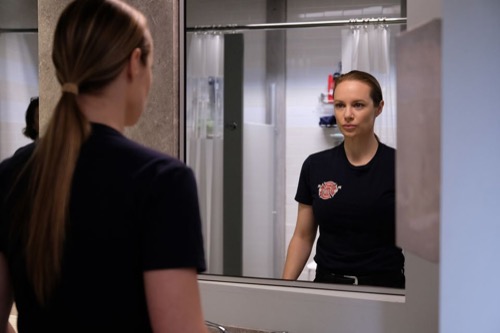 Tonight on ABC Station 19 returns with an all-new Thursday, May 14, 2020, season 3 episode 16 called, “Louder Than A Bomb,” and we have your Station 19 recap below.  On tonight’s Station 19 Season 3 Episode 15 recap as per the ABC synopsis, “Suspicious of the circumstances surrounding her mother’s death, Andy goes looking for answers. Meanwhile, the members of the crew work to evacuate a doctor from Pac-North hospital and find themselves in a life-threatening situation; and Sullivan undergoes surgery for his chronic leg pain.”

Tonight’s Station 19 season 3 episode 16 looks like it is going to be great and you won’t want to miss it.   While you’re waiting for our recap make sure to check out all our TV recaps, news, spoilers & more, right here!

Miller threw a party. His baby daughter was staying with his sister in some fancy hotel and so he celebrated the one night he had off. He had a party. He invited everyone and that included the woman he was interested in. Miller was flirting with her because it was easier for him than being real about his feelings. He secretly had a thing for his roommate and friend Vic. Vic was helping raise his daughter Pruitt. She also just came out of a relationship and so Miller didn’t want to risk their friendship over his feelings. He buried what he felt. He partied with his potential girlfriend Sasha and he woke up next morning in bed with Vic.

Nothing happened. They just woke up like that and the rest of the team was scattered throughout the houseboat. They all slept over. They also all got up at the same time because they were called to come into work. There was a five-alarm fire. The team was needed along with every available firefighter in Seattle and so the only one that got to sleep in was Emmett. Emmett quit his job. He quit because he never wanted to be a firefighter and he only joined up in the first place because his father forced him into it. His father was Fire Chief Dixon. Dixon came under the limelight after Sullivan admitted to the Civil Service Commission that he took drugs and Dixon knew about it.

Not only did Dixon knew about it, but he also tried to blackmail Sullivan over it and he would have forced the man into signing off on favors to Dixon’s friends. Dixon thought he could use Sullivan and he was wrong. Sullivan manned up. He confessed to what he did and he took the punishment. He was suspended without pay. His plan to take down Dixon hadn’t worked as much as he thought and Dixon was able to survive the fallout. He was still Fire Chief. He had wanted to build a legacy in the fire department as the first family and he failed to do so because Emmett quit. He quit weeks ago. He still was hanging around the team because he was sorta with Montgomery now.

They were all over each other at Miller’s party. They slept together that night and they also slept together the next morning. Emmett was developing serious feelings for Montgomery. He was falling in love with this man and unfortunately, Montgomery didn’t feel the same way. He wasn’t in love with Emmett. He admitted as much to a man they rescued the next day. The guy was stuck in an MRI machine and he was freaking out. He thought he was going to die. He confessed to cheating on his wife right before the wedding and so Montgomery spilled his own secrets to comfort his patient. He said he didn’t love Emmett. He just liked sleeping with him and he knows Emmett has feelings.

Montgomery could sense it. He told everything to this stranger and Ben heard it because he was there. Ben didn’t judge Montgomery. He didn’t tell him he was a bad person for using Emmett and so that put Montgomery at ease. The two men rescued this guy. They got him out and they tried clearing the rest of the building. It was a hospital that had a fire. They cleared outpatients and they moved onto the research team that was working out of the hospital. There was a doctor who refused to leave the building until her research could be taken with her. She put up such a fuss that she derailed her own rescue.

Dr. Alba’s refusal to leave meant the team was still in the basement when there was a collapse. Their only exit had been blocked and so five firefighters plus one patient was stuck inside. Dr. Alba had had a bookcase fall on her. She was already paralyzed from the waist down before the fire and so she didn’t feel the injuries to her legs. She did feel some pain in her hand. She had injured it during the fall and it panicked her. She thought she was going to die from the gaping wound in her hand. She was so scared she asked the team to take down what she said. She wanted her research to live on. Dr. Alba started telling the firefighters everything she found so far and she would have liked if they could have radioed it in, but Miller had warned them to turn off their radio when he found something.

Miller found a bomb in the research lab. He even believed it was earlier bombs that created the fire and, according to his timing of the explosions, they had eleven minutes left with a live bomb. They had to turn off the radios because they weren’t sure if the bomber might be listening in or using the radio to set off the bomb. The team had to turn off their radios to be safe. They were, therefore, cut off from the outside world and they had no idea why a bomber would target the hospital. It was Dr. Alba who made a guess. She works with embryonic research and she has received a lot of backlash from the “Anti-Choice” people. She fully believes they targeted her to stop her research.

The team and the good doctor were both trapped inside with a live bomb. They couldn’t send word to Maya. The last thing she heard from them is that they found a device and so she notified the bomb unit. They were talking over plans when her father showed up. Her father had been at the fire station when she told him she had to respond to a fire and so he followed her to the scene. He wanted her to pay attention to him. He was going through a divorce and his wife has finally called him out on his crap. He was abusive. He emotionally abused his whole family and Maya didn’t quite realize it until her father showed up at the scene.

He tried to get in her face. He pulled her by her hair when she attempted to walk away from him and so the other firefighters stepped in to help. They protected her. Maya was able to stand up for herself to her father and she called him out for being the loser he is. Maya then walked away from her dad. She got back to work and she was doing her best to extract her team when something else came up. This time it was good news. Fire Chief Dixon was being arrested for all the crimes he had knowingly committed while he was in power. He was arrested in full view of the reporters and so he’ll never able to live this down.

Maya was celebrating when her team was able to get out. They managed to find an airtight compartment in the research lab and so they put the bomb in there. The bomb later went off. It messed up the compartment and thankfully little else. The team survived the bombing. They were able to get out with the doctor as well as her research. She was looking for a cure to lymphoma and so her research could one day save millions. The team safeguarded the research. They did their jobs and they soon heard the good news about Dixon. Everyone was glad he was gone. Maya couldn’t celebrate for long because what happened with her dad had finally hit her.

Maya ruined the best relationship she’s ever had because she refused to see the truth about her dad. Now, it was too late. She was afraid she wouldn’t be able to get Carina back and so she tried her best. She went to the hospital. She found Carina and made this huge declaration. She did it with her newly short hair. She had cut it on a whim and so she was on a role. Maya now wants Carina back. She apologized for what she did and she told Carina she loved her. Carina replied that she loved Maya too. They were deeply in love and so they got back together. Maya was with Carina for the rest of the day. She ended up missing out on the “glad, we’re alive party” that Miller later threw.

The team needed to celebrate their survival. Even Emmett showed up. Emmett showed up because he wanted to be there for Montgomery. He was ready to confess his feeling to him. He wanted Montgomery to know he loved him and Montgomery told him he didn’t love him back. It was crushing, but it helps to settle things between them and they weren’t the only ones to experience a breakup. Miller later asked Vic to move out. He claimed he didn’t want to confuse his daughter and mess up his relationship with this new girl. He kicked out Vic. Vic became upset with him because she couldn’t believe she was being kicked out and so they got into a huge fight. And it could possibly end their friendship.

Andy hadn’t gone to this second party. Nor did she know about all the drama. She was at the hospital because her husband had surgery and she was supposed to be supporting him. Only Andy came to forget all about her husband the more she dug into the past. She thought her mother had killed herself and that her father had covered up. She had wanted information on it. She reached out to her aunt who was her mother’s sister. They agreed to meet and so Andy abandoned her sick husband at the husband because she was spiraling out and this new mystery had given her the excuse she needed.

Andy went to her aunt’s house expecting to hear how her mother died and instead she ran into her mother who is very much still alive.