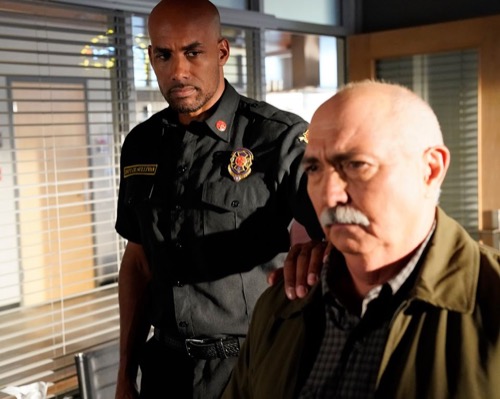 Tonight on ABC Station 19 returns with an all-new Thursday, January 30, 2019, season 3 episode 3 called, “Eulogy” and we have your Station 19 recap below.  On tonight’s Station 19 Episode 3 recap as per the ABC synopsis, “While Pruitt grieves a monumental loss, Andy refuses to do the same and, instead, throws herself into work. Meanwhile, the crew responds to a widespread carbon monoxide leak, and Sullivan makes a controversial choice for captain.”

Tonight’s Station 19 season 3 episode 3 looks like it is going to be great and you won’t want to miss it.   While you’re waiting for our recap make sure to check out all our TV recaps, news, spoilers & more, right here!

Ryan was accidentally shot. Some kid was playing with his mother’s gun and he fired it not knowing that the gun was real. He thought it was all a game until then. He was also crying as Andy was focusing on Ryan and unfortunately it was all for nothing. Ryan later died from his wounds. He died and everyone went to his funeral. Andy, however, was shell-shocked. She wasn’t crying or screaming. She was merely lost in a daze and she didn’t even show emotion at Ryan’s funeral. She went back to work the next day.

Captain Sullivan had been promoted to Battalion Chief. He was going to name a new captain soon and so, of course, Andy came back to work. She went where she was needed. Andy joined up with the new guy Rigo to run the ambulance and they answered emergency calls. They went to a bridal store because the store was suffering from a carbon monoxide leak. It was so bad that one of the brides passed out while she was in the dress and so the store owner had wanted her to remove the dress before she left in the ambulance.

The store owner was so strident about this that Andy had to step in. Andy told the other woman that she could either be arrested for interfering in someone’s treatment or she could get out of the way. The owner chose to step aside. Andy and Rigo were later loading the bride into the ambulance when Andy spotted an emergency. She saw smoke coming out of a manhole and she called for backup. She knew that it could explode at any minute. She chose to stay behind to clear the area and that meant the ambulance couldn’t leave.

The bride, Shauna, she was doing better now that she had fresh air. Andy said she would be stable long enough for them to finish clearing the area and so what she didn’t account for was Shauna’s dad, Martin. The man was suffering from a heavy load of guilt. He had cheated on his wife and then disappeared out of his family’s life. He was back now trying to bribe his way into Shauna’s life. He was throwing money at the wedding and he planned on going back into the store because Shauna had left her cell phone behind.

Rigo tried to tell Martin not to go back in. He was ignored and so he called Andy. Andy was just about to deal with Martin when the manhole finally exploded. It exploded and knocked out Shauna’s father. He was injured. His daughter was scared out of her mind and she kept crying how she needed to forgive him. She didn’t want to lose her dad a second time. Shauna was still crying when backup arrived. Station 19 had come to help. Maya was positioning everyone in key positions and she had benched Rigo.

He was still the new guy. Maya didn’t know his skills well enough to place him and so she tried benching him. Only Rigo swore he knew best. He spotted a manhole and he tried lifting the lid off alone. Jack had noticed what he was doing. He tried to stop Rigo and they both barely made it out alive once that second manhole exploded. Jack took Rigo to task for what he did. He said Rigo couldn’t follow instructions and couldn’t be trusted in the field. He assigned the most basic field operations to Rigo while he chose to work with Andy.

Andy stayed behind even as the ambulance left with Montgomery and Ben. She knew the area better than everyone else and she could assist with the bridal store that caught on fire. Andy was the only one that’s been in the store in the first place. She helped navigate Jack and so Station 19 was out in full force. The only one that wasn’t there was Sullivan. Sullivan’s old leg injury was acting up. He went to the hospital to get checked out and he had to run several tests to determine whether or not he was eligible for surgery.

He was. Sullivan could have the surgery if he was willing to pay the bill and not even his insurance from work was going to help. Sullivan didn’t want anyone within the Fire Department to know that he was injured. He knew it would lead to a desk job if it was ever leaked and so now he has to come up with forty thousand dollars. It was the only way to keep his surgery off the books. Sullivan has to find a way to come up with the money and he also has to hide it from his new boss. The same boss that had already turned his proposal with Ben and so he already has a mark against him.

The rest of Station 19, however, was dealing with the bridal store accident. They saved the store owner who had stayed inside despite warnings and sadly they couldn’t save Martin. He died in the ambulance ride because they hadn’t been able to get him to the hospital fast enough. His daughter also had to watch him die. The memory of it will stay with her forever and so it wasn’t a perfect day for the station. They lost the same amount of people they saved. The team was dealing with that in their own way and Ben decided to confront the new Fire Chief.

Ben wanted to add a Physician Response Team. He thought it would save more lives in the field because he didn’t want to lose another man and so Ben sold it to the Fire Chief as a PR dream come true. He was doing that as Maya was being there for Andy. Andy grew up with Ryan. They spent most of their lives together and so losing him was going to take a toll, but she didn’t want anyone to look at her as if she was fragile. She wanted them to be there for her without judging her. Maya said she could do that and so now she has to prove it.

Maya was also in the running for being captain. She was going up against Andy and surprisingly Andy’s own father has spoken out against his daughter. Pruitt said that Andy wasn’t ready. She just lost her other half and she’s going to need time to heal. If she was appointed captain now, Pruitt said she would blow it and so Sullivan gave it to Maya. Maya was proud to have earned it. She didn’t even try turning down and she also left it to Sullivan to explain his actions to Andy. Andy who didn’t know what just happened.

Pruitt also made his recommendation because he was feeling guilty. He was the one that talked Ryan into coming back to Seattle. Pruitt was dying and he thought Ryan was the best person to be there for Andy when she loses her father. And so now Pruitt is blaming himself and he’s making decisions about Andy’s life without talking to her.