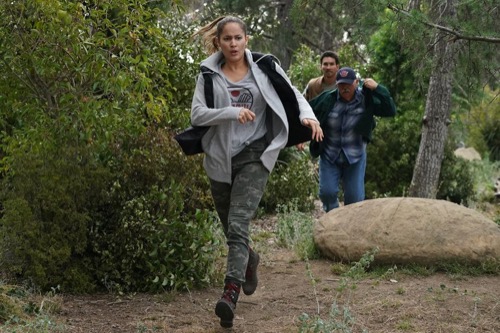 Tonight on ABC Station 19 returns with an all-new Thursday, February 20, 2019, season 3 episode 5 called, “Into The Woods” and we have your Station 19 recap below.  On tonight’s Station 19 Season 3 Episode 5 recap as per the ABC synopsis, “In an effort to increase morale, Maya takes the crew on a team-building camping trip that doesn’t exactly go according to plan.

Their bond is put to the test as they work to save first-time campers after a gruesome bear attack. Meanwhile, Pruitt takes steps to repair his relationship with Andy, and Sullivan goes to extreme lengths to find relief from the pain in his leg.”

Tonight’s Station 19 season 3 episode 5 looks like it is going to be great and you won’t want to miss it.   While you’re waiting for our recap make sure to check out all our TV recaps, news, spoilers & more, right here!

Maya is struggling as the team’s new captain. Everyone felt she stole the job from Andy and Andy even moved out. Andy didn’t see where she was going. She wasn’t talking to Maya and so Maya was feeling down. She lost her best friend. She felt like she couldn’t rely on her team and she was still figuring out how to be a leader. Maya didn’t know what to do or where to go. She was taking a break from it all when she ran into Pruitt and he offered to be a listening ear. Pruitt was once a captain as well. He knew how to handle a team and he eventually gave Maya some advice. He told her that she should take the station on a team-building camping trip.

He said the camping trip would help get everyone comfortable around her. Maya listened to his advice and she later brought this camping trip to the others. She told them it was to help them. She made them come in on their day off and she also opened the door for significant others. The team could bring their spouses and/or boyfriend and girlfriend. Jack couldn’t bring him because he was dating a married woman. He was seeing Eva and she was married to his fellow firefighter Rigo. Rigo, therefore, brought his wife with him on this trip.

He later introduced her to everyone. Rigo didn’t pick up on the weirdness between his wife and Jack even as Andy saw what was happening. Not that she said anything. Andy was still living in her own world and she was too wrapped up in herself to care what was happening. She had been upset when she found out her father was coming on this camping trip too. The two of them still weren’t talking and Andy wasn’t going to forgive him until he apologized for calling her a slut. Pruitt had been out of line when he said that.

Pruitt also thought Ryan’s passing would bring them closer together. It did not and Andy still hates him. Pruitt accused her of sleeping around and he told her she was bringing down his legacy. He brought Ryan to town to fix it and that had been a mistake. Ryan died. Pruitt couldn’t admit the part he played in and so he and his daughter’s relationship had stalled. She refused to speak to him. He refuses to apologize and so Pruitt was stepping in a surrogate for Maya. Maya had needed her dad. She tried keeping in touch with text messages and sometimes it wasn’t enough.

Maya needed someone to be there for her. She got everyone besides Ben to go on this camping trip and she walked around with a clipboard that held their itinerary. It was the clipboard that got to everyone. They hated it and they dreamed of setting in on fire. The clipboard reminded them all that she was bossing them around and so Pruitt told her to ditch it. Maya did. Maya also didn’t really change her behavior. She still kept wanting to dictate fun and it was like she was at school all over again.

Maya had been so obsessed with winning back then. She had needed someone to get her out of the mindset and that had turned into her first relationship. Maya was hoping if she took a chance this time that it would all work out again. But it didn’t. Maya’s fun exercises were all shut down. She was blatantly disrespected and so it was a good thing that the next morning saw a change. The team was waking up when they began screaming and followed the noise to a couple they had run into earlier. This couple had been attacked by a bear.

This bear ripped off the husband’s nose. Scott was his name and he was found unconscious. The screaming was coming from his wife Rachel. Rachel’s arm was in bad shape. She was at risk of losing it and she was still screaming by the time Jack showed up with Eva. It had been suspicious. Eva had climbed into Jack’s tent that morning and she had tried to have sex with him despite her husband is less than fifty feet away. Eva was clearly troubled. Jack was coming around to realize that and then he heard the screaming.

Rigo looked at them suspiciously when they arrived together. Eva claimed she got lost and Jack said he was on a walk. The two tried to lessen that suspicion by helping out. Jack and the firefighters treated the couple. They called in for medical help. Which means Ben and it should have meant Sullivan as well. Sullivan couldn’t come with because he had gotten high. His leg was acting up again and he was around medication all the time. He didn’t think it would big such a big deal to take some. He ended up taking too much. He got high and he wasn’t much help to anyone.

Ben went to the campsite without him. Ben treated Scott and the other firefighters found the man’s nose. They had to run into the bear to find it. Andy was able to talk them into handling the bear and the bear later ran off without hurting any more people. They then gave the nose to Maya so that could run back to the parking lot, but she missed the ambulance and so they rushed to the hospital in their cars. They drove to Grey Sloane Memorial. Pruitt used the car drive to finally apologize to his daughter for calling her a slut and he said how sad he was about Ryan.

Andy apologized as well. She’s been so angry since Ryan died that she’s been taking out on him and she shouldn’t have. The father and daughter were back to speaking to each other. It was a very different relationship than what Maya had with her own father. He father demanded she win at all cost. He told her to put friends last and so Maya has never left that mindset. The one-timed she tried it had backfired. Her father had called her a loser and he refused to talk to her or even acknowledge she was in the room.

Her dad had said all losers were dead to him. Maya thinks that why she’s struggled with being a part of a team and so she envies Andy for her dad. She didn’t know that Pruitt was keeping secrets. Pruitt was dying and the only person he told recently was Montgomery. They shared it over smores. Pruitt used Montgomery as a sounding board and he was hoping to tell his daughter his news eventually. He was talking to Montgomery to help him and Andy was sleeping with Jack again to help get her through her grief.

Neither Andy or Jack cared for how their public display affected Maya. They didn’t stay around long enough to watch Maya flirt with Dr. Carina DeLuca.