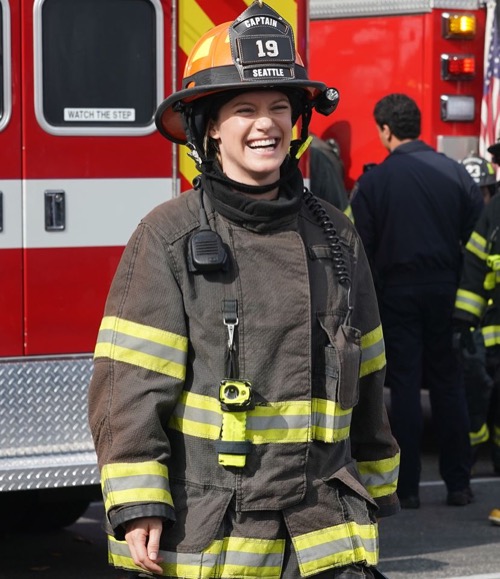 Tonight on ABC Station 19 returns with an all-new Thursday, March 19, 2020, season 3 episode 9 called, “Poor Wandering One” and we have your Station 19 recap below.  On tonight’s Station 19 Season 3 Episode 8 recap as per the ABC synopsis, “When an Army veteran threatens to blow up a pawn shop, Sullivan reflects on his time as a Marine to deescalate the situation. Meanwhile, Vic and Dean try to reason with a man battling Alzheimer’s disease; and Pruitt takes a stand to honor fallen firefighters.”

Tonight’s Station 19 season 3 episode 9 looks like it is going to be great and you won’t want to miss it.   While you’re waiting for our recap make sure to check out all our TV recaps, news, spoilers & more, right here!

Maya requested a meeting. She wanted to speak with both Sullivan and Andy. She had talked it through with her girlfriend and she felt she should have rejected the promotion to captain. Maya didn’t earn the promotion. Her promotion to lieutenant was far too new for her to seek captain just yet and so Maya requested a demotion. She wanted to go back to her prior position. She also believed Andy deserved to be captain and so that’s what old both Sullivan and Andy. Andy didn’t know what to say afterward. She was a little stunned and so Sullivan talked for them both when he said he would consider Maya’s request.

Until then he asked Maya to continue to serve as captain. Maya and Andy went back to their jobs and Andy was later sent with an ambulance out on a call. She was sent with Jack. Jack saw the meeting between the three and he asked if he had been about him. He wanted to know if he was being fired. He wasn’t. They weren’t discussing him and so that’s what Andy told him. She knew Jack felt bad about Rigo getting hurt. It hadn’t been his fault and she didn’t want him leaving or transferring him out. Andy supported Jack. She was telling him that in her own way when they responded to the emergency call and came across two men eyeing each other.

The men had gotten into a fight. This army veteran had sold his knife to the store owner for twenty dollars and he came back to purchase it, but the store owner raised the price to forty dollars. The man has to make a profit somehow. He was trying to sell the knife at forty and the veteran whose name is Kyle had freaked out. He grabbed the knife and he assaulted the store owner. The store owner, in turn, grabbed a bat. The two men were still fighting when the firefighters arrived on the scene and nothing they said to Kyle could get him to back down. He wanted to punish the store owner. He and the guy got into a fight and he managed to grab a grenade from the display counter.

Kyle threatened to detonate the grenade if the others didn’t back off. He was so incensed he didn’t want Andy and Jack to treat the storeowner’s knife wounds and he didn’t want them talking to him. Kyle had lost all sense of perspective. He was holding three people hostage when Chief Sullivan came and Sullivan identified himself as a former Marine. Sullivan used his years of service to get through to Kyle. He managed to get Kyle to release everyone else and it was going to be just the two of them. Or at least that was Sullivan’s plan. Sullivan told everyone else to leave and Andy ignored him.

Andy and Sullivan were sleeping together now. It was a new thing for them and Andy cared about him. She didn’t want him to face an unstable man alone. Andy stayed behind and she tried to hide it from the guys. They didn’t know she was there. They were talking to each other and Sullivan got Kyle to open up about his problems. Kyle suffered one too many traumatic brain injuries. He was sidelined from the war and to make things worse he didn’t come back himself. He was losing time. He did things he didn’t remember and his friends all abandoned him. The ones that would have stayed were the ones that died during the mission.

Kyle threw away the pin to the grenade. He didn’t want to be talked out of blowing himself up and if he did so there’s a chance he could have taken the whole block down with him. The store they were in sold landmines and bombs. Kyle and Sullivan were sitting on so many explosives that one spark could end everyone within miles. The Firefighters outside of the building tried to clear the air. They were facing some pushback from the cops and from Chief Dixon. Dixon was a former cop himself. He wants Seattle PD to handle everything from here on out and he didn’t care that Sullivan was making a connection with Kyle.

Andy was informing Maya about everything that was going on inside. Maya was passing the information to Dixon as proof that their people were handling the matter and he wasn’t impressed. Dixon later decided to ignore her when he saw his son was working outside the building. He had wanted his son to be pulled from the scene and Maya told him that the younger Dixon was a part of her team. She wasn’t going to sideline him because of sentiment. Maya’s decision was ultimately why Dixon decided to hand this matter over to SWAT. He gave them the clearance to enter the building and they were going to come stomping in.

Sullivan meanwhile was doing his best to stop Kyle from committing suicide. He was finally able to get through to him and so he convinced Kyle to turn himself. Kyle later did. He was going to go away for threatening to use the grenade and so hopefully he’ll still receive some therapy while in prison. Sullivan had saved the day. It was a win for their team and so Andy made sure to say something nice about Maya in front of Dixon. She had hoped it would get Dixon to understand Maya did a great job. Only Dixon didn’t care about all of that. He threatened to sideline Maya’s career if she ever put his son in danger again and so that must mean he can never run into a fire.

Dixon Jr had been an art major. He joined the Fire Department because his father was going to run for office one and he wanted his son to look good, only that shouldn’t be why Junior is a firefighter. He was going to have people dependent on him and he needed to either man up or quit.

The firefighters returned to the station. They ran into Vic who was dealing with a man who had Alzheimer’s and Vic had been an old hand at it. Her grandmother had the disease and so she knows to handle people like that. The man she was helping has a daughter who was looking after him. Vic told the daughter that if she ever needed a break that she could call them and that they would help.

Pruitt had also gone on his adventure when he staged an artist scene out front of Dixon’s office to demonstrate all the firefighters that have died from cancer.

Maya and Andy later talked and Andy told Maya not to quit. She said Maya was a good captain. She also informed her that no woman was ever going to be promoted to captain again if she failed.

And unfortunately, the two women were bonding when Sullivan came in and announced Rigo had died.