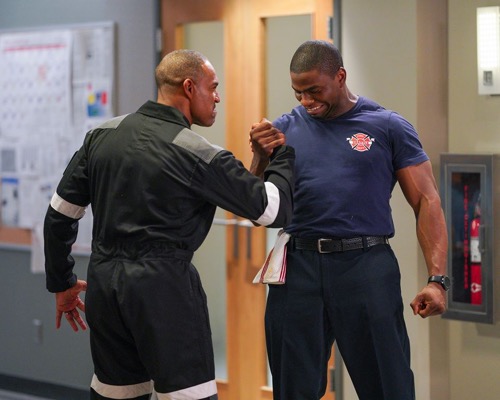 Tonight on ABC Station 19 returns with an all-new Thursday, April 9, 2020, season 3 episode 13 called, “Dream A Little Dream Of Me,” and we have your Station 19 recap below.  On tonight’s Station 19 Season 3 Episode 13 recap as per the ABC synopsis, “Vic rallies the crew to pose for a calendar photoshoot that will support a good cause. Meanwhile, Emmett comes clean to Ben and Sullivan, and shows Andy a softer side.”

Tonight’s Station 19 season 3 episode 13 looks like it is going to be great and you won’t want to miss it.   While you’re waiting for our recap make sure to check out all our TV recaps, news, spoilers & more, right here!

Captain Pruitt Herrera died. He didn’t die in a hospital bed. He didn’t die from his cancer. He instead chose the way in which he went and he died saving the lives of firefighters. Pruitt was a hero. He deserved a “line of duty funeral” and Fire Chief Dixon was denying him one. He claimed that Pruitt wasn’t a firefighter when he died. Pruitt was civilian and so the Chief didn’t want to take the events of Pruitt’s death into account. The dead man was being died the proper funeral. Vic found out about it and she decided that the station was going to give Pruitt the funeral he deserved. She just needed to raise the money for it.

Vic looked at her options. She soon found the best way to raise money was to do a calendar and so she talked her team into it. They didn’t want to do a calendar at first. Vic talked them into it and she was taking photos as Montgomery as Mr. July when the Fire Chief came in. He thought what they were doing was a stunt. He thought Maya was trying to garner sympathy because she was in trouble and so Vic told him that they were doing the calendar to give Pruitt the send-off he deserved. The Fire Chief tried to pretend he understood. He tried to change the topic by saying he was treating everyone to dinner at his country club. It was in honor of his son getting engaged.

Montgomery didn’t know that Dixon Jr. was engaged. The two were sleeping together on and off and so Montgomery felt like a fool. Montgomery went to the showers where Junior followed him. Junior tried to claim that he didn’t love his girlfriend. He said he loved Montgomery and Montgomery laughed in his face. He told the younger man that he didn’t love either of them. If he did, he wouldn’t treat both Montgomery and this Alicia like they didn’t matter. Montgomery told Junior the truth. He pushed him away because he was tired of being used and it’s up to Junior now to decide what he wants.

Junior who later got in trouble with Ben as well. Ben and Junior were hanging up funeral bunting when Junior began talking about everything he’s been through since joining the station and he mentioned someone OD on his first day. Ben didn’t know what he was talking about. He asked Junior about it and that’s when the kid realized his mistake. He forgot the overdose was supposed to be a secret. He tried to take it back with Ben and Ben wouldn’t let him. Ben kept grilling him on who overdosed. He was still trying to get answers out of Junior when two kids showed up and they needed help.

The kids had accidentally handcuffed themselves together. They did it at first as part of a sex game and it didn’t become a problem until they lost the keys. They now needed a way to get out of their cuffs. The young man was also hoping they could preserve the cuffs without breaking them because they were his dad’s and his dad was a cop. Meaning he needed the cuffs. He needed to return them to his dad and so Ben had some unfortunate news for him. They had to cut the cuffs. They also had to do it fast because the young lady had a seizure and they needed to treat her. The young woman hadn’t told her boyfriend she was epileptic.

She’s been hiding it from him. Junior was the one to realize it because she was embarrassed and so Junior understood her. He’s been afraid to show his true self as well. He was talking to Ben when they came back to the station and he more or less confirmed that Sullivan overdosed. He even told Ben what Sullivan told him at the time. Ben said he figured it was Sullivan and he said he was going to report him. He let Dixon Jr. realize they all needed to be open. Junior took it to heart and he later told his team that he was gay. He told them he was the Fire Chief’s son and that he was engaged to a woman, but he was gay. And so Maya welcomed him to the Queer Firefighters Club.

Maya managed to walk away from her hearing still standing. She had cried when talking about Pruitt and the Fire Chief tried to call her over-emotional. Only she put him in his place. She said her tears made her superior not inferior and she also threatened to talk to the press. She told the Fire Chief its best to let her go back to her job and that’s what she did. She went back to work. She and the team were called out to the scene of a fire. Jack and Miller were already there. They were at the scene back when it was a mere gas leak and so they filled in their team about what’s happening. The gas leak was caused by the son.

The little kid was turning on the gas because he knew his stepfather would stop beating his mother if more people were around. Miller and Jack quickly figured out what was happening and they were keeping the husband busy while the wife went in to go collect a bag. The guys didn’t at the time except for the wife also started a fire. She wanted to keep her husband fully occupied and she thought the fire was the best way to do it. The firefighters put out the fire. Jack also found the wife and her son a place to stay. He made sure they were safe and it gave Miller ideas. Miller creates a will. He needed to choose who would get his daughter if something happened to him and he ultimately chose Ben and his wife.

Ben and Bailey were a great couple. They were amazing parents and that’s what Miller wanted for his own child. He now feels at ease. He took care of his will and he and the guys all got around to doing the calendar.

The only one that wasn’t in on it was Sullivan. Sullivan stayed home to be with Andy while she grieved and the two supported each other through the heartache as they were both now orphans.