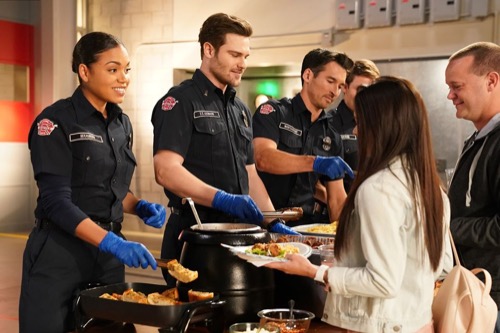 Tonight on ABC Station 19 returns with an all-new Thursday, April 30, 2020, season 3 episode 14 called, “The Ghost That Haunt Me,” and we have your Station 19 recap below.  On tonight’s Station 19 Season 3 Episode 14 recap as per the ABC synopsis, “Andy returns to work while she and Jack fight to save people trapped in a collapsing bowling alley. Meanwhile, Ben confronts Sullivan about his drug problem; and Maya’s mother, Katherine, pays Maya a visit.”

Tonight’s Station 19 season 3 episode 14 looks like it is going to be great and you won’t want to miss it.   While you’re waiting for our recap make sure to check out all our TV recaps, news, spoilers & more, right here!

The team finished the calendars. They even looked good. The calendars were printed and ready to be sold. The team just needed to sell them. They had to sell about three thousand of them in order to give Pruitt the funeral he deserves. Pruitt was why they were doing all of this. He was their captain, their friend, and he had even been a father figure for some of them as well. Pruitt was important to Station 19. The house now wants to say goodbye to him in style and they had Pruitt’s daughter’s support. Andy had seen the calendars. She had smiled when she saw them and that smile was a first from her in a long time.

Andy hasn’t smiled since her father died. Andy also hid away as she was dealing with her grief and so Jack had no idea where she was, but he was concerned. Jack and Andy were roommates. They looked out for each other and he hadn’t known if she was safe or not. Jack later asked her about it when he saw her at the station. He wanted to know where she was in all that time and she told him the truth. She said she was with her husband. Andy confessed that she married Sullivan and that they were together while she was away. Andy had surprised Jack with what she said. He would never have assumed the truth and so it’s a good thing she told him.

Jack was the first person outside of the family that Andy had ever told. Pruitt had no known and Pruitt had died. Therefore, Jack was the first person Andy told. She had wanted to tell someone and Jack was it. He didn’t know why he was it. He didn’t know that Andy and Sullivan were dating much less getting married and so he had further questions for her. Jack asked them as they headed to a disaster zone. The team had been called to a bowling alley that was on fire. Andy used the disaster zone to bench her conversation with Jack and as it turns out Maya used the fire to get over her own issues as well.

Maya’s mother had come down to the station. Her mom told her that she finally left her dad and she had wanted to explain why. Her mom left because she was tired of the abuse. Maya’s father was abusive and he had taken it out on his family. He would have his rages. He would punch walls. He had also demanded perfection out of Maya and so Maya never thought of it as abuse. She merely thought he was passionate. It was her mother that said the “a” word and so that’s what Maya was running from. Maya was running from her past. She didn’t want to confront what really happened when she was a kid and so she used the fire.

Maya had sent in a team to deal with the fire. She had tried to send in Dixon and he refused to go in. He said he couldn’t. He was afraid of dying and he couldn’t go in. He was literally having a panic attack right in front of Maya at the mere idea of going back into the burning building. So, Maya benched him. She didn’t trust him to put his team first and so she got him out of the way. Maya benched him and then sent it others who could look for the kids. There was a group of kids celebrating a party in the bowling alley. No one was sure if they got out and so the firefighters looked for them.

They eventually found them in the arcade. The kids were hiding under a table and there was an adult female with them that was passed out. The firefighters were assisting them when the roof caved in. The debris stood in front of the only exit and so the firefighters didn’t know how they were going to get the children out. Jack was one of the firefighters. He had panicked when he saw the roof caved in and he just kept repeating “we have to get out” over and over again. Jack was once trapped before and the encounter clearly still haunts him. He and Andy were stuck with a bunch of kids. They needed help and so their team tried to reach them.

Maya sent a team to breach the wall. They were going to try and reach their firefighters by taking down an outer wall and so Andy and Jack just had to wait for them. Only Jack didn’t want to wait. Jack began moving things around because he said it would help their team and he’s panicking had him acting frantic. Jack was spinning out and so Andy said her deepest darkest secret. She said it might have been a mistake to marry Sullivan. She had done in part to prove a therapist wrong about replacing her father and all she did do was prove the therapist right. Andy shouldn’t have married Sullivan.

Andy had wanted her father to walk her down the aisle. She thought that’s what he needed and it didn’t hit her until afterward that she shouldn’t have married Sullivan for any other reason than loving him. Andy and Sullivan had rushed into things. They hadn’t thought it through and they each had secrets. Sullivan’s secret had come out. Ben had confronted him when they were alone and he told the other man that he knew about his drug use. Sullivan was an addict. He got addicted to his pain medication because he used it to hide he was injuries and he soon became dependent on fentanyl.

Ben demanded Sullivan do a urine test. He also wanted Sullivan to tell Chief Dixon what happened and that’s where Sullivan put his foot down. He didn’t want to risk his career. He told Ben that he had stopped stealing drugs from the PRT vehicle and he asked Ben not to say anything because he didn’t want his wife to find out. Sullivan admitted he was married to Andy. He tried to use her as an excuse to hide behind and Ben wasn’t having it. Ben didn’t care that Sullivan just got married. He said the right thing to do was tell Dixon and so if Sullivan didn’t do it then Ben was going to. Ben was going to report him no matter what.

Ben’s wife interrupted him and Sullivan. They stopped arguing and they went their separate ways for a while. They later met up and together they went to see Dixon. Sullivan reported his marriage to his boss. He also reported his drug use and its now up to Dixon to decide what to do with him. Sullivan’s wife meanwhile was rescued. Her team broke through the wall and got her and Jack out of there. Jack and Andy talked about his behavior at the bowling alley. She asked him to see someone about his PTSD and he told her he was already speaking to the therapist Diane. He’s been seeing her because he wanted to know why he loves women he knows who can’t love him in return.

Jack discussed this with Andy. He told her he was getting help and then he suggested that she talk to Diane. He thought it might help her. It just might and yet Andy wasn’t sure if she wanted to take that road. She was considering therapy as Sullivan was being left off for what he did. Dixon didn’t want a drug scandal in his first year and so he was burying what happened. He also threatened to drag Ben’s wife into this if Ben didn’t back down and so Ben had to put up with it. Ben later told his wife what happened. He told him how Dixon is going to cover it up and he told him that one way or another he was going to take down Dixon.

The firefighters returned to the station. They took part in a pasta community thing and Maya dealt with her mother. Her mother told her she was going to therapy. She asked Maya to come with her and Maya refused. Maya told her mother to go. She also added how she wasn’t abused and she was. She talked about it with her girlfriend. Carina knows what it’s like to have a father that’s out of control and so she sympathized with Maya. And all Maya could feel was rage because she wasn’t ready to face the truth.

Sullivan meanwhile announced to the whole station that Pruitt was approved for Line of Duty funeral and he also told them that he and Andy were married.

Sullivan was happy to announce his news, but Andy was beginning to have regrets.