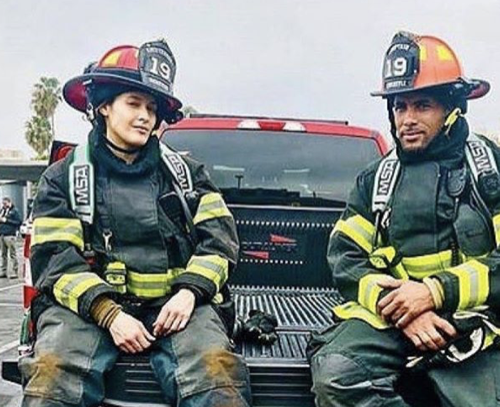 Tonight on ABC Station 19 returns with an all-new Thursday, April 30, 2020, season 3 episode 15 called, “Bad Guy,” and we have your Station 19 recap below.  On tonight’s Station 19 Season 3 Episode 15 recap as per the ABC synopsis, “Ben, Jackson, and Emmett are put in a precarious and dangerous position with a potential victim. Meanwhile, Andy’s search for more background on her family opens her eyes, and Vic and Travis are caught in the middle of a corruption scheme.”

Tonight’s Station 19 season 3 episode 15 looks like it is going to be great and you won’t want to miss it.   While you’re waiting for our recap make sure to check out all our TV recaps, news, spoilers & more, right here!

Vic didn’t always want to be a firefighter. It wasn’t a childhood dream of hers. She had actually wanted to be an actor and she had pursued it for a while. Vic was in small productions. She starred in a few shows and she had been happy with her lot. Vic was happy with her life right up until her grandmother died. Her grandmother was the one who inspired her to be a performer and it was hard to return to that life much less the dream once her grandmother has passed away. Vic had needed a change. She changed her life. It led her to Station 19 and she became best friends with Montgomery.

She knows Montgomery so well it’s why she knows Montgomery slept with Emmett Dixon. She was able to piece together by watching the two of them in the same room and so this hookup was taking her mind off of her own troubles. Vic didn’t have to think about Jackson if she was thinking about Montgomery. Montgomery is her best friend and Jackson is her ex. They weren’t together long. It was her first relationship after she lost her fiancé and it crashed and burned when she moved into is apartment without telling him. Jackson hadn’t been ready for that sort of commitment. He backed off and their breakup happened.

Only Jackson now works at Station 19. He was working with the PRT which stood for the Physician Response Team and he was one of the physicians. He and Ben were doctors. They could treat people in the field better than a regular ambulance. They had just picked someone up when their driver took a detour. Emmett was forced to take everyone out for a ride because a woman jumped into the front of the truck and she pulled a gun on him. Emmett had been taken, prisoner. He was also forced into taking others as prisoners as well. Emmett drove the truck to where this mysterious woman demanded.

He couldn’t alert anyone to what was happening. Emmett just drove and Ben and Jackson had no idea what was going on. They were treating a man who seemed to have been attacked at the park. This might relate to the case that came into the station. A young woman came in covered in blood and she was holding a knife. She said some strange man grabbed her and tried to drag her into the bushes. She fought back. She cut him with the knife and then she lost a sense of time. She started walking. She walked into the station and she kept saying she was sorry. The young woman whose name was Darcie had needed a psychiatric evaluation after everything she’s been there. She was clearly traumatized.

Jack and Miller helped Darcie get to the hospital. The man she had attacked was in the PRT vehicle and no one had to worry about a reunion. He wasn’t getting to the hospital anytime soon. Emmett was still the driver. He was forced to pull over. The woman that had taken him hostage had forced him to open up the back vehicle as well and that’s when she demanded all the drugs they had or she was going to shoot Emmett. It turns out his kidnapper was a drug addict. She just wanted drugs and she didn’t care who she hurt in the process. She really was going to go through with killing Emmett if she didn’t get those drugs. And so Ben and Jackson were going to get her what she wanted.

They were going to assist Emmett with getting them when Emmett tripped. It was one simple trip and it frightened the kidnapper into shooting Jackson. Jackson was shot in the leg. The gun was then turned on Ben and so Ben gave the Emmett the code. Emmett accessed the drugs. He let the woman take whatever she wanted and no sooner did she get it that she was hit by a car. The woman needed assistance and two doctors plus one medically trained EMT suddenly had to help her. They were doing this as Andy was finding out some family secrets. Andy remembered her mother’s sister and the woman’s family had disappeared out of her life after her mother died. She had thought it was naturally at the time. She didn’t suspect anything else until she saw a letter written to her dad.

All along Andy has believed that her parents had an epic love story. She’s looking back at photos and she’s seeing how unhappy they were. She’s also reading her aunt’s letter. It seems her parents might not have been in love and so Andy is questioning everything. She’s even questioning if she knew her father. She had tried talking to Maya about it and Maya got offended. Maya was sensitive because she knows deep down that her own father emotionally abused her and so she didn’t want Andy to paint Pruitt as a bad guy. Pruitt was a good man. He had helped everyone on the team and so Andy wasn’t going to find any sympathy with Maya.

Andy went back to her husband. She looked for guidance there and he had to step away because Vi needed to talk to him. Vic found out Fire Chief Dixon is trading political favors with people and she wanted Sullivan to do something about it, but he refused to. Sullivan needed his job and he didn’t want anyone to find out about his own secrets. He buried what Dixon was doing and he told Vic to back off. Sullivan returned to Andy. She needed help going through her father’s things and Andy was looking for evidence when the rest of the team found out what happened to the PRT. Ben lost both of his patients. The rapist died and so did the drug addict.

Jackson’s bullet wound went through cleanly. So, he’ll be alright. It was Emmett that was worrisome. He didn’t want to be a firefighter anymore. He only got into it because of his father and now he wants to quit. He actually did quit later on. He quit and he went running back to Montgomery because he still wanted to sleep with him.

Maya’s issues with her own father have her spiraling out and she slept with Jack thereby cheating on her girlfriend Carina.

Sullivan was being blackmailed into going along with Dixon and he later turned to Ben for help because he couldn’t tell Andy, but Ben turned him down. Ben figured Sullivan could help himself. He also wasn’t wrong because Sullivan went to the Civil Service Commission afterward. He reported himself for stealing drugs. He said this was a sign of Fire Chief Dixon’s corruption and he gave them plenty of evidence to go along with it. Sullivan ditched his wife to finally man up. He hadn’t told Andy what he was going to do and she was still wrapped up in her life. She went looking for answers about her father. She turned to an old friend of his and this friend refused to tell her about her parents’ marriage.

And Vic meanwhile went rushing back to the hospital when she found Jackson had been shot.