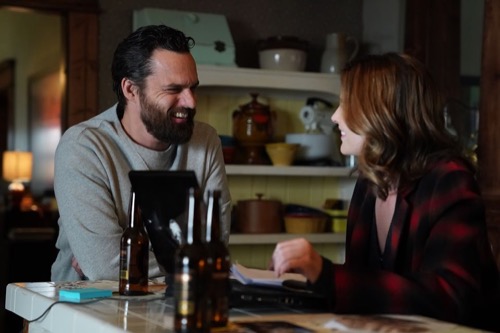 Tonight on ABC their drama Stumptown based on the graphic novel airs with an all-new Wednesday, March 25, 2020 season 1 episode 18 called, “All Hands on Dex,” and we have your Stumptown recap below. On tonight’s Stumptown season 1 episode 18 as per the ABC synopsis, “To get justice, Dex takes matters into her own hands after finding herself at the forefront of a murder investigation where she’s the prime suspect.

Meanwhile, Hoffman struggles to remain impartial in the investigation and could lose everything if he continues to help Dex. Elsewhere, Grey attempts to work on his budding relationship with his estranged father while a familiar face from the past makes a surprise visit.”

Thomas “TJ” Junes was found dead. Dex was the one that found him. She went over to his house to talk to him about Benjamin Blackbird and she found him dead on the floor. She even checked to see if he was still alive. He wasn’t and the moment Dex realized so she had been attacked. Someone came up from behind her. They drugged her and she was later found passed out at the scene of a homicide. Dex was taken to the hospital where she later woke up chained to a bed. She soon learned that she was under arrest for TJ’s murder and that they had compelling evidence against her. Dex was found at the scene. She had broken into the home. She was also very drunk when she did so.

Dex’s drinking problem is no secret. She was known for being messy and she’s blacked out on events before. Dex was unstable. The police could prove that and so what they didn’t have was motive. They tried to get it from talking to Dex. They questioned about the night of events and Dex was making things harder for herself when her lawyer walked in. Hoffman had asked his dad to represent Dex. He knows she has motive because he helped her get her hands on a classified DOD file and the file said that TJ and his squad were dirty and that they killed Benny because he was a whistleblower.

Dex went over to TJ house to discuss if he was dirty. She was angry and drunk and if the police ever found that out she would be in jail instantly. Dex was advised to stop talking to them by her lawyer. Hoffman Senior later questioned Dex about the case and he had been surprised by all that she told him. She told him about Benny and TJ. She told them she needed to find out who set up Benny and that she received some help from his son. She also said she wasn’t going to stop searching for the truth. Dex even went to Sue Lynn for help. She told Sue Lyn everything she learned and she asked to see her old letters from Benny. He could have mentioned who else was in the squad.

Dex was digging for the truth while everyone else was grasping how serious her situation was. Hoffman Senior spoke to his son. He didn’t want his son getting in trouble because of Dex and he also learned that his son was sleeping with Dex. If he had known that from the beginning, he would never have agreed to take her case. Hoffman Senior didn’t take cases that came back to bite them. He was smarter than that and he had thought his son was as well. Senior had questioned Hoffman’s entanglement with Dex. He told his son how her case didn’t look good for her and that he himself wasn’t sure if she was innocent.

Only Hoffman believes she’s innocent. He knows she would never kill someone and so does Grey. Grey was so concerned that he reached out to his father for a favor. He had asked his father if he still knew the guy that could get them new identities. Grey had wanted to buy one for Dex and ship her out of the country. He was talked out of the idea by his dad. It, in turn, made Grey talk to Dex about her mission to find out who killed Benny. Grey asked her what would happen if she found the men responsible and she couldn’t answer him. Dex doesn’t know what she was going through. She later found someone from Benny squad and she questioned.

The guy had been terrified to talk to her. He had been the Commanding Officer in Afghanistan and Benny had come to him to make a report. The guy chose instead to bury it. He told Dez how he tried to get Benny transferred and that Benny thought he was safe where he was. The guy also mentioned that they got to Benny because he was on his way to see his girl. Dex found out how Benny was set up and she also got a name for another person that was involved. She went to go question this second man, but she soon learned that he had become a priest and so Dex attended confession.

She went into the booth. She asked him about Benny and he punched her through the partition. The priest then tried to make a run for it. He grabbed a bag full of cash and he led Dex on a chase. She later got her hands on the money if not the man. It was a hundred thousand. Dex checked over the money with Grey’s help and they found out it all came from 2006. The squad was all reportedly in Afghanistan in 2006. How was it they got their hands on so much money? Dex was doing her best to figure it out when the cops came and they tried to arrest her. They wanted to arrest her because they finally found out she had a motive to kill TJ.

Dex received a warning from Ansel. She snuck out of the building while the police were searching for it and she got away with the money. Dex went to Hoffman. She thought he could help her again and Hoffman turned her down. He couldn’t keep risking everything for her. He told her as much and so Dex went to Sue Lynn’s. She brought the money and Ansel with her. They were going to hide out there while Dex searches for Murphy again. He was the tricky priest that punched her and he had answers. Dex later left her brother with Sue Lynn. Sue Lynn had also given her a gun when she left and she advised Dex to use it wisely.

Dex went to the CO. She realized he would be the next target for the people that killed Benny and so she used the guy as bait. However, she was wrong about everything. Robert Wolfe wasn’t just the CO. He was also behind what happened in Afghanistan and he would have killed Dex if Grey hadn’t shown up. Grey came to help. He searched for Wolfe and there weren’t that many in the area. Grey arrived at just the right time. He received a phone call from Hoffman and Hoffman has been working the case. He found out that the soldiers robbed an armored vehicle that was making a delivery.

The soldiers then took the money. They’ve been using to live their lives in Seattle and Hoffman also learned that Murphy was dead. Wolfe had probably killed him. Wolfe was the only man left from a three-man group that attacked the armored vehicle and so he was the only one that could give Dex the answers she needed. Unfortunately, he was also armed. Wolfe started shooting at Dex and Grey and so they made a run for it. They hid in the woods behind his house. Dex didn’t move until Wolfe tried to leave and so she pulled the gun on him. She confronted him. She asked him about Benny and he said he didn’t lie earlier when he called Benny a good man.

He was one. Wolfe and the others killed him for getting too close to the truth and Wolfe tried to fight for the gun Dex was holding. Dex had no choice but to shoot him. She shot and killed him and she avenged Benny.

Dex later talked to Sue Lynn about how she was feeling about it all. She had been cleared by the police and Hoffman had gotten into trouble. He had given up his badge. He said he needed time to think about who he was and so Dex wasn’t the only one going through a change. She had gone home where she found the place very tidy. Tookie had helped Ansel clean and make dinner. And Dex didn’t know what for until Ansel opened the door and her mother was there.

Grey meanwhile was recovering in the hospital when he heard his father had skipped town after stealing something rather important.