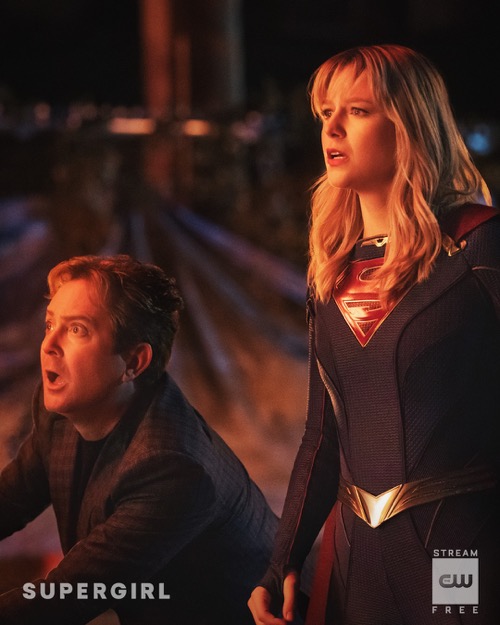 Tonight on the CW the series Supergirl airs with an all-new Sunday, February 23, 2020, season 5 episode 13 and we have your Supergirl recap below. In tonight’s episode called, “It’s A Super Life”  season 5 episode 13 as per the CW synopsis, “Kara starts using her powers she hid for years and gets recruited to join a secret agency to protect the citizens of National City.”

Supergirl is having a conversation with Alex and J’onn about using Mxyzptlk to try and find a way to reason with Lena. They tell her is she thinks it will work she should try it. Kara says ok then questions how she does it and all of a sudden her refrigerator lights up and out pops Mxyzptlk. He sends Alex and J’onn to a quote-unquote happy place (pretty much just them running around playing a game dressed in halo gear.)

Kara asks him how it works. Mxyzptlk tells her he will show her important moments in her life when she reaches the moment she wants he will snap his fingers and pause it. She will be able to confront Lena. The if she is happy with the domino effect he will make it a reality. (This sounds awfully sketch … not sure this is the guy I would trust to help with timey wimey wibbly wobbly type stuff).

Dude has a movie screen set up. Kara sits down on the couch and snaps she has a tub of popcorn. He asks her where it all went wrong. While she babbles on and on he puts the movie reels up to his face and looks at them. They watch a clip of her and Lena on a plane then they show Mercy attacking. Kara asks him to stop it right before that happens. He obliges and tells her not to mess it up. Just like that Kara is in that time and place with Lena. Lena so her what is wrong. Kara tells her that she is cynical because she has been betrayed by her mother and her brother and now Kara. Lena is like whaaatttt??? Kara tells her she is Supergirl and that she never meant to deceive her.

Before they can really discuss it Mercy attacks and Kara takes off. She tells Lena to, wait and she will be back. When she comes back Lena is gone. Kara ask Mxyzptlk where Lena went. He explains that events are unfolding differently now. He moves the time forward a little bit. Lena goes to see Sam and unloads all her feelings about how she thinks maybe Kara has always seen her as a villain. Sam tells Lena that she was the hero, not the villain, they hug and Lena thanks her. Kara says even if Lena still hates if the same prevents her from going dark side it’s worth it and she can live with it. Mxyzptlk tells her she literally can’t. He again fiddles with time and Kara realizes they are now watching when Liberty used kryptonite on her.

He shows her that Lena tries to save her but couldn’t make it on time and that she died.

Kara makes Mxyzptlk stop the film. They both cry and use some tissues. Kara tells him she needs to go back further to when Lena was housing Brain. He looks it up on the web. It shows her and Lena fighting. Kara tells him that is the moment she is trying to avoid it. They keep, going back and when they reach where she asks Lena if she has any more kryptonite she tells him to beam her up. Before he sends her back he asks you don’t have a catchphrase. He tells her they will work on it. Haha … in this memory Supergirl tells Lena she is Kara.

Lena actually looks surprised even though Supergirl and Kara look exactly the same (how did she not figure this out on her own?) Lena ask her how she could do that and then make her face a dangerous situation alone. Kara tells her she wants them to move past this and work together. Lena is not all about forgiveness and teamwork. Kara becomes lightheaded and Mxyzptlk snaps her back and tells her they aren’t going to rely on her memories for the really big things anymore. He starts moving the memories. Kara is confident Lena will help with the world killers. He tells her nope. Then she complains because he is rushing through things. Mxyzptlk tells her there is way too much exposition.

They get to memory with Mon-El. Kara asks him to zap her there so she can get his perspective. Once there she tells him she told Lena. Mon-El asks how Lena took it. Kara tells him not well she asks him what she should do. He seems to think that once Lena realizes Kara was only doing it to protect her she will forgive her. Mon-El and Kara get their fight on in the backyard with Sam. Sam’s mom comes rushing out (Hannah’s grandma on PLL) and tries to help the situation. Lean shows up and zaps Sam. She thinks she fixes her but she doesn’t and Sam kills Lena then Mon-El and then Sam dies. Kara tells Mxyzptlk to get her out of there.

Kara tells Mxyzptlk to zap her back to the very beginning. Just at that moment his laptop, starts buffering. He whips out the Betamax. Kara finds the right VHS tape and pops it in. Kara has him zap her back to when Lena said they were friends. Kara tells Lena she wants to show her something. She flies in and out the window. Lena is surprised. It tells Kara she is incredible. She then asks her why she is trusting her with such a big secret. Kara tells her she needs her to know she can trust her and that they can work together.

They shake. Cue a bunch of Daily Planet front-page headlines. Then it cuts to a trial where Lena is. Wing questioned about who Supergirl really is. Lena pleads the fifth. (Shoutout to Aria’s dad on PLL.) Kara finally thinks she got it right and then Ben Lockwood shows up. Ben tells her that his father, his mother, his wife, and his son jumped to their deaths because they thought Supergirl would save them. Obviously she didn’t. Ben wants to know who Supergirl really is. When Lena refuses to tell him he kidnaps her.

Ben is clearly batshit crazy. He has Lena and Coville strapped in some chairs and tells Supergirl via video message either she gives up identity or they both die. The memory continues to play and everyone is sure Lex is helping Ben. Kara gets upset and storms out. Winn follows her. She tells him that this is her greatest fear that someone she cares about will die because of her. Winn tells her not to worry and to focus on helping Lena that he and everyone else will be fine. Cut to Kara showing up at city hall and telling everyone she is Supergirl. She saves Lena and Coville. Kara thinks this is the timeline they should stay with. Mxyzptlk skips to the end of the timeline and shows her that everyone she cares about dies. Kara begins to think no matter when she tells her bad things will happen. Kara decides her and Lena should never have been friends. Mxyzptlk shows her what that would look like. He obliges. Her loft has been completely destroyed and he can’t zap them back to the other timeline.

Maggie saves her and Mxyzptlk. She takes them back to the base. Mon-El gets upset when he sees Mxyzptlk because of the whole trying to trick Kara into marrying his thing. Lena says Supergirl is a terrorist and is being helped by a fifth-dimensional being. She warns everyone to do as they are told and she is only trying to keep everyone in the city safe. Winn and the company tell her that Lena went crazy, killed her brother, destroyed half on National City and rules the other half with an iron fist. Kara insists they can fix it. Mxyzptlk says he needs his powers.

They tell him that Lena is using all the fifth-dimensional power. Winn brings up a guy with a hat. Mxyzptlk tells him to get the hat and he can make all of it go bye-bye. The lights start blinking then go off completely. Sam crashes the party and Brain is with her. It’s all-out chaos. Kara goes looking for Lena. Kara calls out to Lena and uses her real name. Lena asks her who she is. She tries to talk reason but Lena whips out the kryptonite. J’onn is about to get killed by Sam but he gets the upper hand and makes her disappear. Lena is still using the kryptonite. Winn finds the hat and Mxyzptlk zaps him and Kara back to her apartment.

Mxyzptlk ones to try to fix it one more time. Kara tells him no. That no matter what she does it will always have a consequence and she has to learn to live with that. Kara thanks him for helping relieve her of her guilt. She tells him to go and be free and do whatever it is he does. Mxyzptlk thanks her for letting him help her and finally giving him the chance to be liked for who he is. He tells she was right when she said magic can’t be forced it has to be found. Then he tells her he is off to Mardi Gras in the ’80s…. the 1780s. Kara finds a VHS that says “The One Where Lena Decided to, Work With Lex.

Lex”. Lena is in the kitchen putting a kettle on the stove. Kara flies In her window. Kara tells Lena that she is done feeling guilty and it is Lena’s decision that she decides to do. If she forgives her than she is there for her. If she chooses to go through with whatever she and Lex have planned than she will treat her like any other villain.

Kara is at home with J’onn and Alex and a table full of food that Mxyzptlk left them. Kara tells them that seeing all the other timelines made her realize if she makes a mistake she has to live with it. She tells him how much them being with her since the beginning means to her. They tell her they feel the same way.

Mxyzptlk is watching from outside and then floats away.