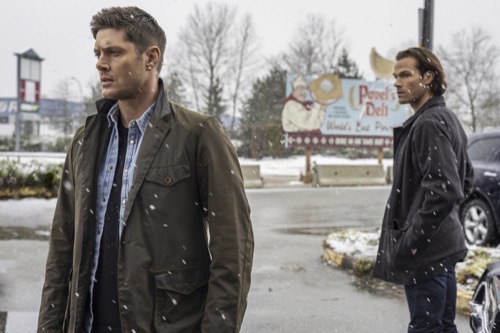 Supernatural airs tonight on the CW with an all-new Monday, October 15, 2020, season 15 episode 15 called “Gimme Shelter,” and we have your Supernatural recap below. On tonight’s Supernatural season 15 episode 15 as per the CW synopsis, “Castiel and Jack work a case involving members of a local church. Meanwhile, Sam and Dean go off in search of Amara. Matt Cohen directed the episode written by Davy Perez.”

Several teenagers are serving food at a church. One woman comes in. She is dirty. They want to ask her to leave but the pastor tells them to have compassion. Later, Conner, one of the teens, walks home. He hears someone yell his name from an alleyway. It is dark. He gets scared. He trips and falls. At his feet, he finds a teddy bear. It talks to him. Suddenly, he is strangled by an unseen force.

Dean and Sam discuss the latest possible cases. Dean thinks he may have found Amara in Atlantic City. Cas comes in. He thinks isn’t safe for them. Dean tells him they are going anyway and talks Cas and Jack into going out on their own case.

Cas and Jack arrive at the scene where Conner was hurt. They learn about the teddy bear left at the scene. Jack thinks this is demonic. They head to a spot where Cas can call on a crossroads demon. Zack arrives. They ask about their case. He shares that it isn’t a demon job. He offers his services, sharing that he is bored. Jack thinks maybe this is out of their league. Cas doesn’t want to give up. Meanwhile, another woman named Valerie is attacked by what appears to be the same person who hurt Conner.

Cas checks in with Dean and Sam. Dean tells them to work the case. Sam worries about their own case. What are they going to do to get rid of Amara? Later, Jack arrives at the church. He asks about joining as he looks into Conner’s case. Cas speaks with the pastor and asks about Valerie, a woman who never made it home the night before. Meanwhile, Valerie is being tortured.

Jack talks to one of the teens at the church. She cries to him about Conner. They were close before. She shares that her mom died 3 years ago. Jack shares how his mom also his dad. He discovers that she is the pastor’s daughter.

While pumping gas, Amara approaches Sam and Dean, shocking them.

Valerie continues to be tortured while Amara invites Sam and Dean to lunch. They awkwardly accept. Jack is accepted into the church. Cas arrives and also speaks with everyone, telling them how he once was lost. Someone streams Valerie being tortured right onto the church TV’s.

Sam and Dean tell Amara all about how they want to trap Chuck. They need her help. She doesn’t want to hurt her brother. He may have put her in the cage once but they are twins, light and dark, creation and destruction.

Sam and Dean head to leave but Dean has one more question for Amara. He asks her why she brought back his mom. After she explains that she hoped to release him from the life he thought he was supposed to have, Dean, tells her he is furious. They are all living in Chuck’s world and it’s rigged. They are all hamsters. She begins to think and just maybe she can trust Dean.

The pastor’s daughter Sylvia lashes out at her friend. It appears she may be hiding a dark side. She runs off. The pastor and the church people come out. Her friend tells the pastor all about her. Jack and the pastor find his daughter. She has a knife. She threatens her dad before stabbing Jack. He heals quickly. Cas comes in and makes her sleep. They discover Valerie.

Cas heals her. Jack heads to call the police. Valerie and the pastor wonder what Cas is. After the police arrive, Cas and Jack hit the road to head home. They talk about Amara and Chuck and Jack’s own family issues. Jack finally shares that Billy told him he will die too when Amara and Chuck are killed. He will go off like a bomb. He doesn’t want Sam and Dean to know. Cas refuses to see him die again.

Cas and Jack arrive home. Can runs into Dean who is grabbing a drink. It’s late. Cas is headed out to find another way to kill Chuck. Dean doesn’t understand. Cas explains that he might not return so there is something he needs to tell him.